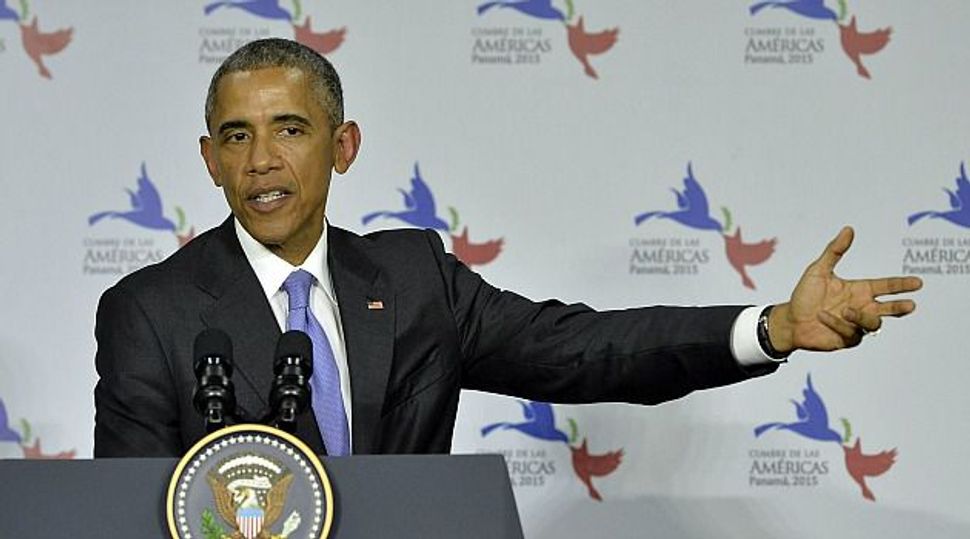 President Barack Obama held a “very heartfelt” meetiing with Jewish leaders at the White House on Monday to discuss the Iran nuclear deal and their concerns about Israel’s security.

The extraordinary meeting ran for an hour — far longer than expected — and Obama impressed the leaders with his sincerity and dedication to Israel and the Jewish community’s concerns.

“What struck me as unusual was the he really expressed a depth of feelings about Israel that I hadn’t seen before,” a Jewish leader who attended the meeting told the Forward. “It was very heartfelt.”

The meeting included top leaders of the American Jewish Committee and the Anti-Defamation League, umbrella groups like the Jewish Council for Public Affairs, Conference of Presidents of Major American Jewish Organizations and the Jewish Federations of North America, pro-Israel groups like the American Israel Public Affairs Committee and J Street, and the major religious streams.

One of the meeting’s attendees told the Washington Post that the president was “heartfelt about his connection to Israel.”

Another said that “the president talked about how deeply he feels about Israel and the Jewish people and anti-Semitism. It was not just about Iran. It was much, much deeper in terms of the president sharing with us how he felt.”

The Jewish leader who spoke to the Forward got the impression Obama was offended by the fact that some have questioned his commitment to Israel because of the deal or his well-publicized fights with Prime Minister Benjamin Netanyahu.

The Jewish leader said many participants wished the president could do a similar job communicating to the broader American Jewish community.

“Many of us left with the feeling that we wished all our constituencies could be in the room, because what we had seen was something that many rank and file American Jews are not seeing,” the leader said.

National Security Administration chief Susan Rice opened the meeting and Obama joined five minutes later. After saying he didn’t have much time, the president talked for a full hour.

On Iran, Obama made clear he has no illusions and said that if a verifiable good deal cannot be reached by June 30, there will be no agreement.

He emphasized that the devil is in the details and made clear that all options are still on the table, including military action to prevent Iran from obtaining nuclear weapons.

He did not ask Jewish leaders to lobby Congress against bills that would give lawmakers oversight over the deal. He insisted there would be a role for Congress once a deal is reached and it comes time to debate sanction relief.

Spoke about the need for a viable peace process with Palestinians and that there is a need to see what the positions of the new Israeli government will be.

That meeting continued with Rice and several other senior officials, as Obama left for a second meeting with U.S. Jewish community leaders and “influencers,” as described by sources close to the White House.