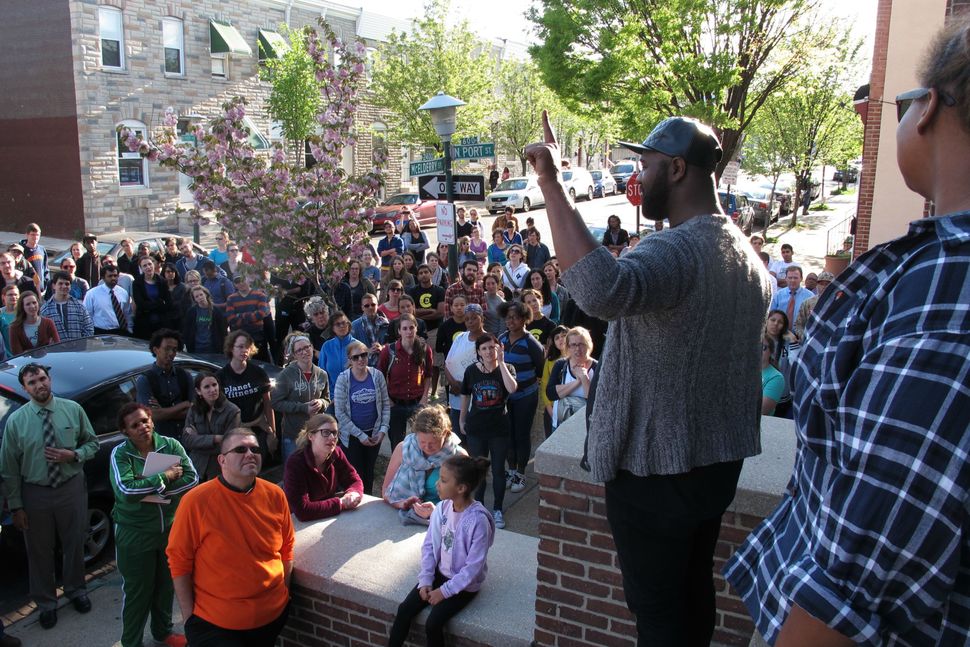 Joe Parker looked on with relatives and neighbors Tuesday as a diverse crowd grew outside the Amazing Grace Lutheran Church on his block in Baltimore’s southeast side.

The rally, one of many small gatherings for peace and unity among Baltimore’s disparate communities, took place just a day after hundreds of rioters and looters stormed through the same streets in an outburst of rage over the death of Freddie Gray, an unarmed black man, in police custody.

“They’ve come together today,” said Parker, who complained of his area’s rampant crime and government neglect. “Sad, there wasn’t a lot of people from our neighborhood. But you know, as long as you got people coming in to help, showing they care, that makes all the difference.”

The church’s pastor and local residents held a discussion on the need for community building and accountability — and ended by leading the group in songs of peace.

As a shaky calm took hold on Tuesday, Jewish residents of Baltimore, who mostly live and work far from the center of violence, joined in the effort to clean up and keep the peace as volunteers.

And Jewish leaders, mindful of the history of both cooperation and conflict in the city that was a poster child for racial unrest a half-century ago, sought to calm fears that the violence could spiral out of control.

Rabbi Andrew Busch of the Baltimore Hebrew Congregation signed a public letter for peace along with 25 other faith leaders on Sunday.

“The history and context that have some people living such wonderful lives and others living lives so bereft of hope, it’s a real history,” he told the Forward. “We share in this community, because we live here and we care about the people that live anywhere in this community.”

The Baltimore Jewish Council’s volunteer wing helped direct those interested in donating or volunteering to city community organizations, while leaders of the council and other Jewish institutions across the city worked with and stood alongside African American leaders.

Rabbi Jessy Gross, who leads Charm City Tribe, was one of those who responded to the call to clean up Monday night’s mess caused by rioters.

“I was really excited about the members of our community we saw out today,” she said. “I work with a group of young people downtown who most strongly identify as a Jew for the command that we should pursue justice and take action,” she said.

While Baltimore remained mostly calm on Tuesday, the continued presence of police and national guardsman signals just how tense the situation remains following the April 12 death of Gray, 25, who suffered a spinal injury in police custody.

Like businesses throughout the city, synagogues and Jewish institutions were mostly closed on Tuesday.

The riots, which broke out the day of Gray’s funeral and followed mostly peaceful protests on Saturday, led to nearly 250 arrests. Cars were burned, police injured and shops looted.

In response, Maryland’s governor issues a state of emergency and activated the National Guard. The city’s mayor has enforced a citywide, week-long curfew after 10 PM each night.

Some looting was reported near Baltimore’s densely populated northwest Jewish community, home to thousands of Orthodox Jews, though no incidents against Jewish persons or institutions were reported.

“There’s been concern that things would spread,” said Arthur Abramson, Executive Director of the Baltimore Jewish Council. “We’ve received a lot of calls, but we’ve done rumor control,” he said, noting that unverified rumors have given rise to some unwarranted fears.

He, like other leaders the Forward spoke with, portrayed a week of close and mutual cross-communal support.

Baltimore’s Jewish community leaders have worked for decades to maintain strong ties with the city’s African Americans, but there have been occasional rifts between the two communities in a city that is historically known as a flash-point for race relations.

Most recently, in 2010 tensions flared after allegations arose that two brothers, both members of Shomrim community patrol, beat a 15-year-old black youth. One of the brothers was found guilty by a circuit court of false imprisonment and second degree assault.

The situation threatened the communities’ strong relations, as both Jewish and African American community members took to the streets.

But community leaders aren’t expecting racial tensions surrounding Gray’s death to escalate, as they did following the race riots in 1968 in the wake of the assassination of Dr. Martin Luther King. At the time, many Jewish businesses adjacent to a street at the center of the protests were targeted, leading to Jews flock to the suburbs.

Abramson, acknowledging that residents in Baltimore were uneasy about recent events, said he believed the most violent of the rioting was now in the past.

“Things are much better… I feel pretty confident, also from other sources at police and community levels, everybody remains optimistically hopeful.”