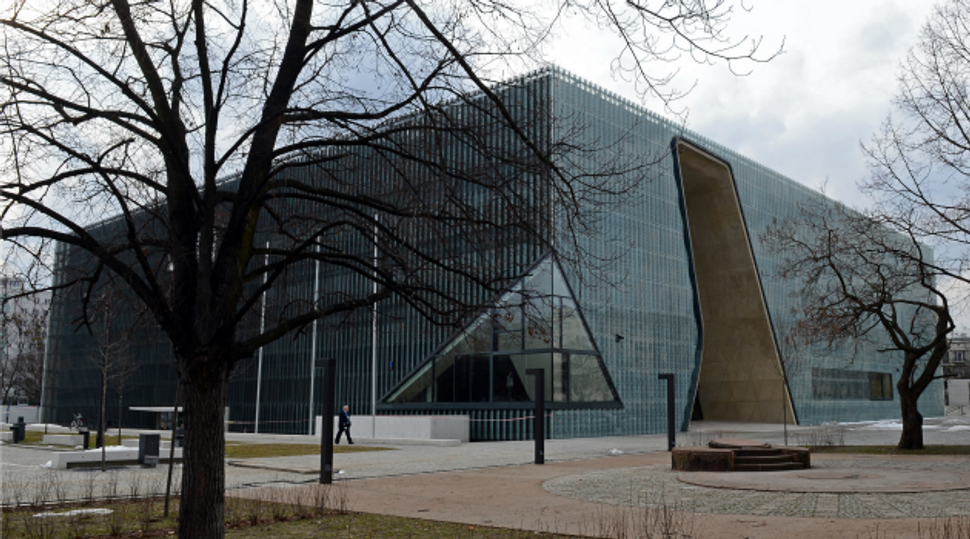 Remembering: A new monument to so-called righteous gentiles is slated to rise near the museum of Jewish history in Warsaw. Image by getty images

A dispute over designs is the latest roadblock to hit a controversial Holocaust memorial planned for the site of the Warsaw Ghetto that would honor so so-called Righteous Gentiles who rescued Jews.

In the latest twist on the hotly disputed project, the New York philanthropist who launched it has rejected the choice of plans made by a prestigious architectural panel his own foundation selected.

As a result, the foundation’s spokesman says it’s unclear when planning work may resume.

“We are considering all options,” said Konstanty Gebert, who is also a board member in Warsaw of the Remembrance and Future Foundation. But he added: “There is no chance in hell that we are giving up on the project.”

The foundation’s chairman, Holocaust survivor Sigmund Rolat, has renounced the decision of the judges appointed by his foundation to award the commission to a proposal for a cluster of trees to be erected on the grounds of the Museum of the History of Polish Jews. The proposal, submitted by a group of Austrian architects, was one of five finalists in the competitive process.

The report of the panel, which included some of the most prestigious architects in Europe, said that the trees represent “a novel concept of commemoration, rather than an imposing physical presence.”

Rolat, 84, told the Forward that the winning entry was “radically changed” since its selection as one of the finalists in January. Therefore, he said, it was no longer a valid entry at the time of the judges’ vote. He called it a new, “sixth” entry that could not be considered with the five original finalists.

“The jurors are not blind, they liked this sixth project,” he said in a phone interview. “On the other hand, they overlooked the fact that this was not one of the five finalists that should have been voted on.”

Even as they hail the heroism of non-Jews who saved Jewish lives during the Holocaust, critics have strongly contested Rolat’s plan to build a monument honoring these rescuers at the site where thousands of Jews died battling the Nazis alone. These critics object, among other things, to a memorial that encroaches upon a space that should honor the memory of the victims.

Rolat insists that recognition of the 6,454 Poles who risked their lives to save Jews is a moral imperative, but said the panel’s decision to raise a cluster of trees for this purpose cannot be considered a valid entry.

The museum’s architect, Rainer Mahlamaki, one of the judges who voted for the trees, agreed that the winning design was radically changed from the version selected in January, but he said that changes in design happen all the time in architectural competitions. “There are no rules that govern them,” he said.

Mahlamaki sees the winner of the competition as a new type of art and memorial as opposed to a monument.

Rolat’s push for a monument has unleashed hostile fire from Polish and Diaspora Jews. Their organized Facebook page encourages Jews to contact the panel judges and urge them not to build a monument where the Warsaw ghetto uprising took place in April 1943.

“It is here that the Jews of the Warsaw ghetto were dying in their last heroic, desperate and lonely fight against Nazi murderers,” said an open protest letter from the committee, which consists of children of survivors who left Poland in 1968, after a wave of government-motivated anti-Semitism. The letter described the site as “the symbolic memorial and burial ground” of the 3 million Polish Jews who perished in the Holocaust.

The critics point to three existing memorials to Righteous Gentiles, as the rescuers are known, already erected in the museum’s vicinity.

Adding yet another memorial so close to the museum, they say, will redefine the Warsaw ghetto as a space for Poland’s non-Jewish rescuers. They stress their objection is to the site, not the memorial itself.

“I wouldn’t be here today if my parents were not saved by Polish Christians,” said Lilka Elbaum, a researcher on the Holocaust who opposes a monument along with renowned historians and artists.

Historian Jan Grabowski calls the planned memorial at that specific site “part of a larger memory revisionist project, and as a historian I am offended by it.”