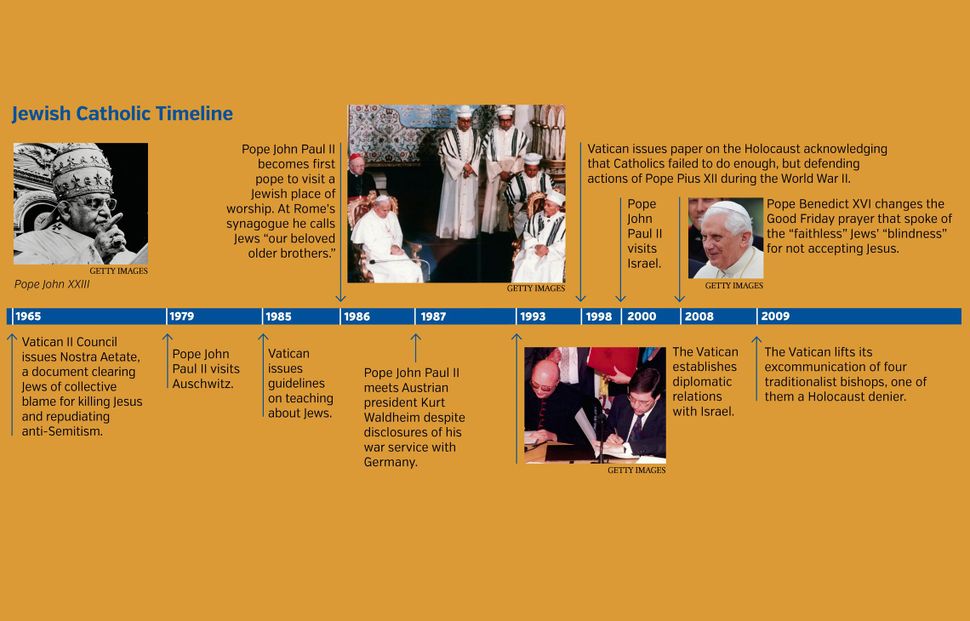 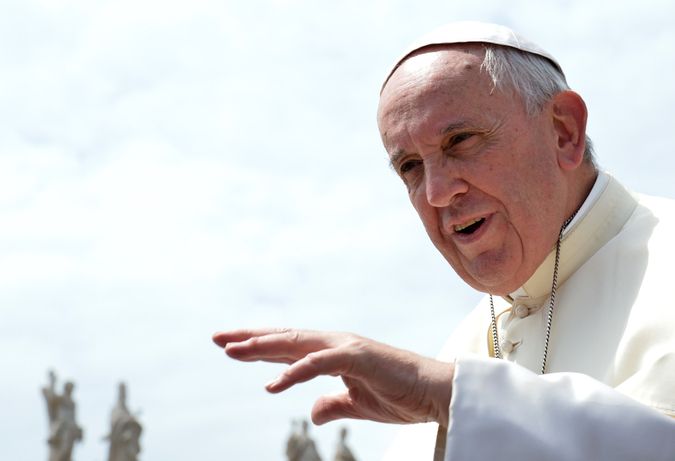 Could a lengthy document, written in Latin and published after extensive theological debates, overturn centuries of animosity between the Catholic Church and the Jewish people?

Closing the book on almost 2,000 years of persecution seemed nearly impossible when the Second Vatican Council adopted Nostra Aetate, the Catholic Church’s historic rejection of the notion that Jewish people are collectively responsible for the killing of Jesus Christ.

But now, religious leaders on both sides are celebrating its success.

“It’s like watching a vast ocean liner make a U-turn,” said the Jewish Theological Seminary’s Burton Visotzky, who has been involved in interfaith dialogue for decades. “Since Vatican II, the church has extended a hand in peace and welcomed us as their siblings.”

The dramatic change in relations, which unfolded over five decades of dialogue between Jews and Catholics, has never been free of tension.

To a list of persistent issues regarding the church’s role during the Holocaust, recent years have added new points of friction stemming from the Vatican’s views on the Israeli-Palestinian conflict. Catholic-Jewish reconciliation has also done little to diminish anti-Semitic sentiments in Eastern Europe.

But, religious leaders stress as they celebrate the Nostra Aetate anniversary, there is now a fruitful dialogue between the two communities where such concerns can be and are addressed.

“We have an ability to talk through these matters, to resolve some of them through conversation and on some of them to agree to disagree,” said Rabbi Noam Marans, director of inter-religious and inter-group relations at the American Jewish Committee. Marans described Nostra Aetate as a “lifesaving document.”

Nostra Aetate, Latin for “in our time,” was approved in 1965 by a vast majority of bishops who had gathered for the Second Vatican Council, or Vatican II, as it is often known, under the personal imprimatur of Pope John XXIII. The document, which defines the church’s relationship with non-Christian religions, pays special attention to the church’s relations with Judaism. In it, the church acknowledges the joint roots both religions share and, in doing so, puts an end to the doctrine of supersession, which viewed Christians as having replaced the Jews as God’s chosen people.

Nostra Aetate’s most significant aspect is its clear rejection of the notion that Jews bear responsibility for the killing of Jesus. The document affirms that Jewish leaders operating under the authority of the Roman Empire during the time of Jesus pressed for his death. But it crucially declares, “What happened in His passion cannot be charged against all Jews, without distinction, then alive, nor against the Jews of today.” The paper does not include the term “deicide,” used in the past by the church to describe the killing of Jesus by the Jews.

Another critical part of the declaration contains a clear repudiation of anti-Semitism, stating that the church “decries hatred, persecutions, displays of anti-Semitism, directed against Jews at any time and by anyone.”

Nostra Aetate, said Marshall Breger, a law professor at Catholic University, “had a transformational effect on the Christian approach toward Jews.” He explained that after the document was approved, “Roman Catholicism began to understand Jesus as a Jew,” an observation that later led Pope John Paul II to refer to the Jews as “our beloved older brothers.”

The signing of the document, on October 28, 1965, did not resolve all issues at once. In the decades that followed, ties between Catholics and Jews were put to the test time and again, but scholars, now looking back, believe the principles that Nostra Aetate set forth are what has allowed the relationship to persevere through all trials so far.

One key issue was ensuring that the spirit of Nostra Aetate was reflected not only in liturgy and from the pulpit, but also in what Catholic teachers taught their students in classrooms and in what Catholic leaders put forth in seminars outside church walls. 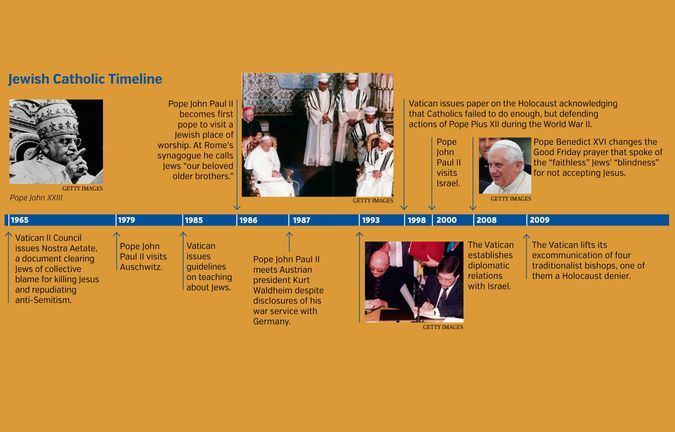 Under Eugene Fisher, a Catholic scholar of Judaism who oversaw Catholic-Jewish relations for the American National Council of Catholic Bishops from 1977 to 2007, the church eventually implemented a thoroughgoing revision of its curriculum materials. These changes have ensured that new generations of Catholic youth learn about the role of Judaism in the church’s foundation and about Jesus’ own life as a Jew.

Another battle focused on the last remnant of anti-Jewish language in Catholic prayer liturgy, a reference in the church’s Good Friday services to the “faithless” Jews. The traditionalist language of the prayer calls on the Lord to “remove the veil” from the hearts of the Jews who do not acknowledge Jesus Christ, and offers prayers “for the blindness of those people.”

‘Tensions, even those regarding the Holocaust, are being constantly aired and discussed.’

after Nostra Aetate, until 2008, when the church adopted a version that removed derogatory descriptions of Jews. The prayer, however, continued to petition God to “illuminate their hearts, that they acknowledge Jesus Christ is the Savior of all men.”

Most controversies, however, surrounded the Holocaust and the Vatican’s conduct during World War II.

The touchy questions of whether the church showed tolerance toward Nazi ideology and what actions, if any, it took to save Europe’s Jews have haunted Jewish-Catholic relations ever since the end of the war. It erupted over symbolic issues, such as a cross erected by an order of nuns near Auschwitz, and over the 1987 reception of Austria’s president, Kurt Waldheim, who was a former Nazi officer, at the Vatican. Jewish groups were also furious at the church in 2009, when Pope Benedict XVI lifted the excommunication of four traditionalist bishops, one of them a known Holocaust denier.

Symbolism, however, was just part of the story. The main point of contention focused on the papacy of Pius XII, who led the Holy See during the Holocaust.

Critics claim that Pius ignored pleas from Europe’s Jewish leaders to explicitly denounce the Nazi regime for its genocidal anti-Semitic policies. His defenders point to Pius’s broad public condemnation of anti-Semitism and, during the war, of genocide and the oppression of innocents on the basis of their “nationality or race” as a clear reference to the Nazis’ mass murder of Jews, though he did not directly name the Nazis as perpetrators or the Jews as victims. They point also to his instructions to local Catholic clergy in some instances to aid Jews who were under threat of mass deportation. Critics cite Pius’s insistence in other instances on the church’s need to maintain its neutrality when he was pressed to publicly protest Germany’s anti-Semitic policies and genocidal actions.

In his 1998 statement “We Remember: A Reflection on the Shoah,” Pope John Paul II acknowledged that many Catholics had failed to act to help Europe’s Jews, but the Vatican still refuses to allow full access to some of its World War II archives. Meanwhile, to the consternation of Jews still calling for full transparency of all records on Pius, Pope Benedict declared his predecessor in 2009 to be “venerable,” a title given to those “heroic in virtue” and under consideration of sainthood. Last year, however, Pope Francis said the process of declaring the wartime pontiff a saint “has been stalled.”

Cardinal Timothy Dolan, archbishop of New York, believes the fact that these tensions, even those regarding the Holocaust, are being constantly aired and discussed is in itself a sign of Nostra Aetate’s success. “That we have not dodged them is a test of our mettle,” Dolan said on May 20 at a three-day conference at Washington’s Catholic University marking the Nostra Aetate anniversary.

The conference, where a variety of religious leaders in Christian clerical collars, Jewish yarmulkes and Muslim headscarves gathered to assess 50 years of Nostra Aetate, drew a broad consensus regarding the positive impact the document had on Catholic relations with Jews, Muslims and other faiths.

“There were some hiccups,” Marans said to conference participants. But these were always dealt with, he hastened to add, in a manner that allowed the relationship to “live for another day.” According to Marans, while Nostra Aetate is not perfect, it has provided “sufficient trust that the good can become better.”

The latest hiccup surrounds the Palestinian conflict and was triggered by the recent Vatican recognition of Palestine as a state and by the pope’s meeting with Palestinian leader Mahmoud Abbas.

While reactions in Israel were furious, Jewish groups split along ideological lines, with the right-wing Zionist Organization of America claiming the move is a return to the “historical Catholic enmity towards Jews” and mainstream groups cautiously disputing the political rational of the Vatican’s move.

“It is important to keep in mind that what goes on between the Vatican as a state and Israel as a state can be appreciatively different than the relationship between the two religious communities,” Visotzky said.

The success of Nostra Aetate in mending relations between Catholics and Jews has been largely limited to the United States and to parts of Europe, where Jewish-Catholic dialogue is thriving.

“Nostra Aetate had the most effect in the United States because American Catholicism wanted to internalize it,” Breger said. “In Europe it was internalized by the elites, not by all followers.”

This could be the reason anti-Semitism, fueled in part by a traditional Christian viewpoint of Jews, is still prevalent in Eastern Europe. A 2012 Anti-Defamation League survey found that 46% of Christians in Poland and 38% in Hungary believe Jews are responsible for the death of Jesus.

According to Breger, while officially all church groups oppose anti-Semitism, the notion “has not yet been followed forward by Eastern Churches that were not as affected by Nostra Aetate.” In Western Europe, researchers view the recent rise in anti-Semitism as being related to a combination of Muslim anti-Jewish sentiments, right-wing Christian racism and left-wing secular extremism.

Looking forward to the next 50 years, scholars and religious leaders on both sides envision an expansion of Jewish-Catholic cooperation beyond the immediate need to resolve differences between the two faiths. Dolan suggested Jews and Catholics work together to counter what he views as their common enemies: secularism and the dwindling numbers of church and synagogue goers. “It’s alarm clock time for both of us,” Dolan said, adding that religion “is now listed under ‘hobby’ or ‘personal interest.’”