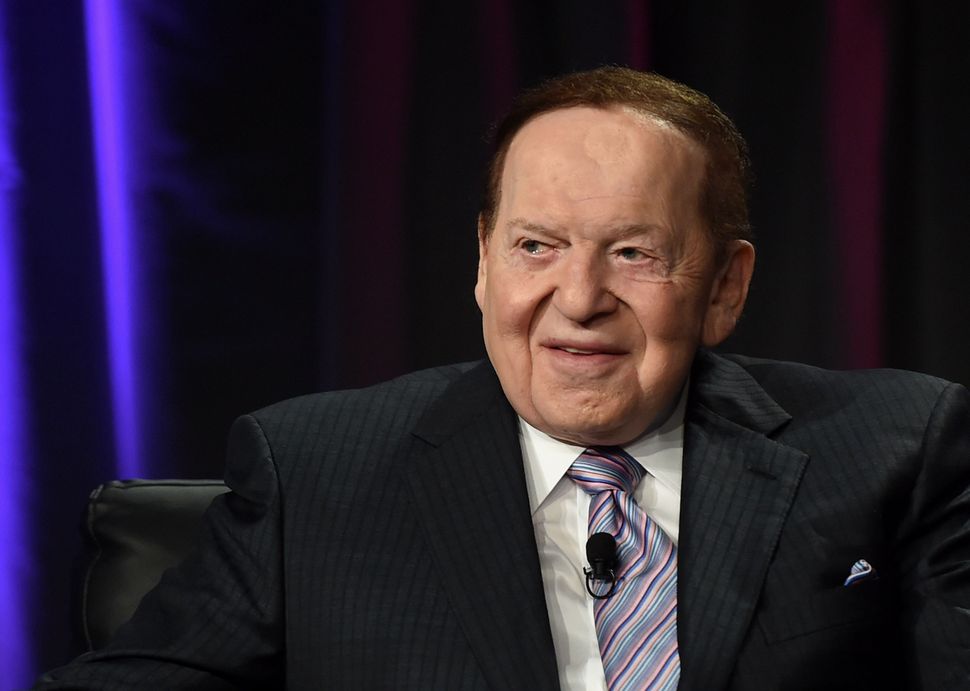 Washington – Leading Jewish mega-donors have summoned pro-Israel activists for a closed-door meeting in Las Vegas to establish, and fund, successful strategies for countering the wave of anti-Israel activity on college campuses.

Organizers have sought to keep the gathering secret and have declined to respond to inquiries from the Forward that would confirm the upcoming meeting with two separate informed sources.

The planned Vegas summit marks a shift in approach on the issue of anti-Israel activity on college campuses, whose growth in recent years has captured a top spot on the Jewish communal agenda, The initiative, in this case, did not come from students on the ground, nor did it emerge from work of the many organizations involved in pro-Israel activism on campus. Instead, it is an idea coming from wealthy Jewish philanthropists who have decided to take action. Their communiqués to Jewish groups invite them to come and brainstorm with them during a weekend gathering at the Venetian, Adelson’s luxury hotel on the Las Vegas Strip.

Saban, a Los Angeles billionaire who is also a major Democratic donor with close ties to the Clintons, has been discussing the idea for more than a year, one source with firsthand information of the initiative said. Saban has spoken to Israeli officials, including the former ambassador to Washington Michael Oren and top officials in the Israeli foreign ministry, about setting up a special task force to deal with increased calls on campuses to adopt measures of boycott, divestment and sanctions against Israel, measures commonly referred to as BDS.

According to an official in the Jewish community, it was another California philanthropist of Israeli background, Milstein, who put together the initiative. He got mega-donor Adelson and Reisman, who in recent years has been increasingly involved in initiatives to support Israel, on board.

The donors’ invitation came as somewhat of a surprise to at least some of the invitees. An official with one major group said leaders of the organizations were not aware of the initiative before receiving the last-minute invite and had not been consulted as it was crystallized. The official added that leaders of these groups were not quite certain what the goal of the Vegas summit is. Another Jewish organization official made clear that while his group intends to participate, it will not dispatch a top-level leader to the event.

All Jewish organizations contacted by the Forward declined to speak on record, citing the request of organizers to keep the gathering away from the public eye.

According to several prospective participants, Jewish groups planning to attend the meeting include Hillel, StandWithUs, the Anti-Defamation League and the Jewish Federations of North America. The Israel Action Network, a communal body created specifically to counter BDS and delegitimization of Israel, will not attend, although it will be represented by one of its parent organizations, JFNA.

J Street U, which is the student arm of the dovish Israel lobby, has a presence on most campuses and opposes BDS, was not invited.

The purpose, an official with one of the groups invited said, was to “find the best strategies” for countering campus anti-Israel campaigns and to “make sure there is funding” for those programs. However, groups were not asked to prepare a pitch to present to the panel of Jewish mega-donors.

Another official explained that the request for secrecy was “reasonable” because “it makes sense not to have the public in the room when you sit with funders to set priorities.”

Campus activity has been among the fastest-growing fields in Jewish organizations. Most major groups, including the American Israel Public Affairs Committee, the ADL and the American Jewish Committee, have set up operations geared at students, alongside groups whose main focus has always been campus activity, such as Hillel and ICC. Yet despite the growth in pro-Israel activism, pro-Palestinian-driven protests and resolutions have been on the rise. The past year has seen a record number of 15 universities adopt resolutionsdemanding divestiture of college funds from Israel.