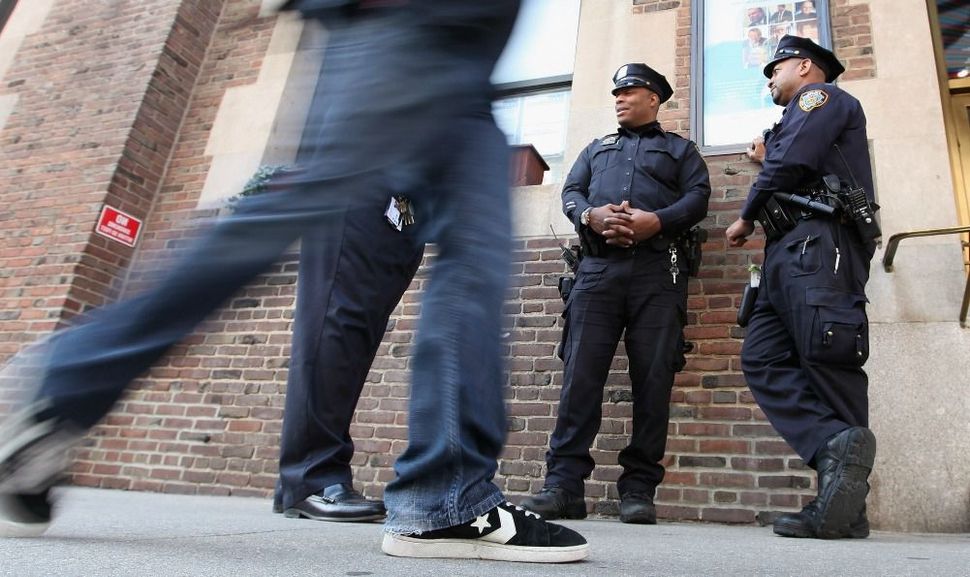 Standing on the steps of City Hall in downtown Manhattan, Letitia James, the New York City public advocate, turned to the private school students arrayed like a backdrop behind her and ended the speech she gave in mid-May with a shout: “We want school safety agents!”

The children — Muslim girls with their heads covered, Catholic school students in vests, a few Jewish kids in yarmulkes — cheered back.

The rally was part of an increasingly high-pitched effort to ensure the passage of a bill, favored by city religious schools, that would assign a city-funded security guard to each New York City private school. Long a priority of the Orthodox Union’s Advocacy Center, the bill has attracted major backing in the New York City Council but has yet to draw support from the mayor’s office.

The bill would provide at least one guard from the New York City Police Department’s school safety division to every nonpublic elementary or high school in New York City that requested one, and would cost the city up to $50 million a year, according to a City Council estimate. It’s been a long-term goal for its sponsor, Councilman David Greenfield.

“This is an issue of public safety,” Greenfield said. “Religious bias attacks have gone up in New York City.”

Greenfield cited the attack on the offices of the magazine Charlie Hebdo in Paris as a reason for concern, and said that Muslim school groups had supported the bill because of attacks on religious schools in Pakistan.

The NYPD’s school safety agents, while uniformed officers, do not carry firearms. An April article on the bill in The Chief-Leader, a New York City paper that covers public sector unions, reported that the president of the union that represents the city’s school safety agents “scoffed” at the notion that the agents could prevent a terror attack.

“The safety agents are trained, but if something like that were to occur, what would they expect the School Safety Agent to do? Unarmed?” Teamsters Local 237 President Greg Floyd told the paper.

Still, 46 of the 51 members of the council have signed on as co-sponsors of the bill, which has been the subject of council hearings. No vote has been scheduled. In an email to the Forward, Wiley Norvell, a spokesman for Mayor Bill de Blasio, offered a noncommittal statement when asked about the bill.

“Protecting all of New York City’s children, regardless of which school they attend, is a mission the NYPD takes on each and every day. And it’s a job the Department does exceptionally well,” Norvell wrote in an email to the Forward. “We constantly seek out new ways to deepen that protection, and will gladly continue our dialogue with members of every community on how we can achieve that together.” When asked directly whether de Blasio opposed the bill, Norvell did not respond.

At a May 21 City Council hearing, Police Commissioner Bill Bratton was blunt about his personal assessment. “I would have other priorities for how I would assign resources, rather than to the assignment to private schools,” Bratton said, according to a report by the local television news station NY1.

A handful of council members, meanwhile, are holding out against the additional safety agents.

“It’s an additional cost that I don’t think should be borne by taxpayers to subsidize the cost of running a private school,” said Councilwoman Inez Barron, who represents parts of Brooklyn. “Where do we draw the line?”

Barron, who said that her two sons had gone to private schools, said that she didn’t oppose public funding for crossing guards or for transportation to and from school, which private schools already receive.

“Once they’re inside, what goes on inside should be borne by those who choose to use that school,” Barron said.

Councilman Daniel Dromm, another opponent of the bill, wrote a column in the news outlet City & State arguing against the bill for giving police a bigger role in city schools. “Police presence does not create safer schools,” wrote Dromm, who represents parts of Queens. The bill’s proponents dismiss these concerns. Maury Litwack, the OU Advocacy Center’s director of state political affairs, asserted that the case for nonpublic schools receiving public funding for services like security has been fought and won. “The argument doesn’t work anymore, and I’m really sick of hearing it,” Litwack said. “There’s such ridiculous precedent for it.”