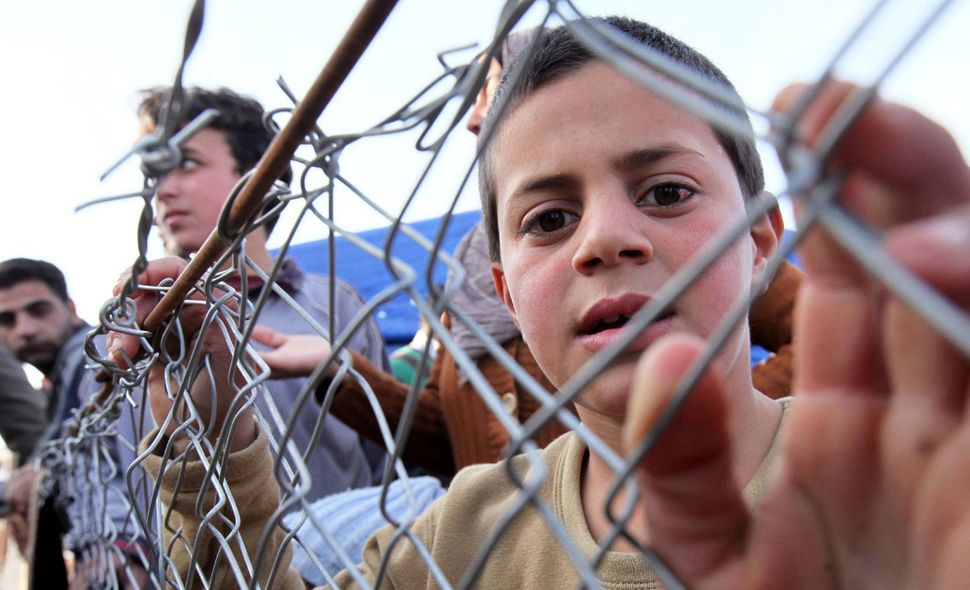 Of the four million Syrians who have fled their war-torn country in recent years, at least 135,000 of them require immediate resettlement.

But America has absorbed fewer than 1,000.

For Jewish activists pushing the government to shift gears, that feeble number and the accompanying bottleneck in resettlement of Syrian refugees are troubling reminders of their community’s own experience during World War II.

“Waiting two years for resettlement isn’t really rescue,” said Melanie Nezer, vice president for policy and advocacy at HIAS, the leading communal group dealing with the admission of refugees. “As a Jewish community, we understand what it means to be refugees without getting any help. We would have been in a different place if the world had stepped up then.”

The challenge facing Jewish groups assisting Syrian refugees is more complex than their past missions, which involved helping refugees from the former Soviet Union or from South East Asia gain entry to the United States. Security checks have been ramped up significantly in the past decade, slowing the admissions process to a grind. For many refugees, the road to a new life in America is a years-long journey. A less-inviting climate now prevails, regarding all forms of immigration. And there is an extra sense of suspicion in some political circles toward those coming from Muslim and Arab countries. This has made advocacy on their behalf even harder.

“There is a politicization of the refugee issue, which is concerning,” Nezer said.

Human rights organizations often refer to the Syrian civil war, now in its fourth year, as the biggest humanitarian crisis of our generation. Brutal attacks by the Assad regime against opposition forces have been followed by equally vicious responses by forces from the group known as the Islamic State, which has taken over parts of the country. The result so far is more than a quarter of a million casualties and a country in ruins. The 4 million Syrians who have fled their homeland have found temporary shelter in Turkey, Jordan, Lebanon and Iraq. Many more are described as internally displaced, a term used for those who were forced to flee their homes and towns because of fighting and are now living a refugee life in their own country.

The United Nations High Commissioner for Refugees, the aid agency tasked with determining refugee status and identifying those in need of immediate relief, has been sifting through requests for resettlement in the refugee camps on Syria’s borders. The 135,000 already deemed by UNCHR to be at high risk in their current situations include single women or those with children but no father present, refugees suffering from illnesses, and those facing persecution, including journalists and political and human rights activists.

“I’ve seen families that are really desperate,” said Shadi Martini, a Syrian expatriate working from the United States to help refugees. “They want to survive, but they can’t work, and have to go through this very long process. They don’t have any idea when they’ll be resettled.”

Martini serves as a senior Syria adviser at the Multifaith Alliance for Syrian Refugees, an ecumenical group working to assist refugees in the camps, including those wishing to resettle.

The Multifaith Alliance, noted Rabbi Eric J. Greenberg, the organization’s director of communications, programs and interfaith relations, started off as a Jewish response to the Syrian crisis. A year and half ago the group reached out to other faith-based groups and to humanitarian organizations, inviting them to join the effort. The alliance is made up of 40 groups of all faiths, but Jewish organizations still play a prominent role in the coalition.

The alliance has deployed its funds to help Syrian refugees in camps and to raise awareness of the crisis they face among Americans. The group delivered part of its assistance through Israeli relief organizations working at the Syrian refugee camps. In an official publication, the alliance said it is “nurturing this development through transformative Syrian-Israeli civil society engagement to complement future governmental diplomatic work.”

It is uncertain how recent revelations of Israeli military assistance to Jihadist groups fighting in Syria may now impact the humanitarian assistance provided by these Israeli relief groups.

Traditionally, the United States has taken it upon itself to admit half the refugees worldwide who are identified by UNHCR as being in need of immediate resettlement. In the Syrian case, this translates into about 65,000 out of the 135,000 total. But so far, UNHCR, slowed by its own vetting process, has referred only 12,000 requests to the United States.

Experts anticipate that by the time the refugee evaluation process is completed, some 400,000 will be recognized as needing resettlement. This will present America with a request to absorb 200,000 Syrian refugees.

But U.S. resettlement quotas, which have not been updated in years, now stand at 70,000 people total, from all over the world, per year. HIAS and Jewish groups are asking to increase this quota to 100,000 per year, a level the United States maintained in the 1980s. “It’s not a huge number for a country the size of the United States,” Nezer said.

But even if the quota is increased — a move that could face large political hurdles — filling it will be difficult, due to the extensive vetting and security background checks now in place. The process has slowed admissions to a trickle.

Refugees identified by the UN as being vulnerable and in need of resettlement are required to fill out lengthy forms and to provide detailed information before being cleared for resettlement by UNHCR. The refugees, many of whom are dealing with health and family problems, are then asked by the United States to repeat much of the process. As a result, their average waiting time for resettlement is 18 months.

Jewish groups have been working on a model that could eliminate some of the double checks and make the process more efficient. All involved stress that they are not asking Washington to relax its security checks. The proposals include instituting coordination between the U.S. and UNHCR background checks; allowing qualified nongovernmental organizations to conduct parts of the process, and providing a quicker track for women and children, who make up 80% of the high-risk refugees.

The advocacy groups are also examining the possibility of temporary resettlement in a third country while the U.S. clearance process gets carried out.

Their efforts look likely to face political pushback. Republican Michael McCaul of Texas, who chairs the House Homeland Security Committee, warned recently that letting in more Syrian refugees would be a “serious mistake” because there is no way of knowing if they are affiliated with terror groups.

Not only has the lengthy process plagued Syrian refugee resettlement, it also hurt attempts to help Iraqi and Afghan nationals who worked with U.S. forces during the wars in their countries. Facing backlash after the American troops’ withdrawal, they were promised resettlement in the United States but have had to wait years for admission.

A group of Democratic senators, led by Dick Durbin of Illinois, sent a letter to President Obama on May 21, urging him to increase resettlement quotas and to speed up the background check process. “We must continue to carefully screen refugee applicants for all national security and terrorism concerns,” the Democratic senators wrote, “but we urge you to devote sufficient resources and staff to ensure that this process does not hinder resettlement for legitimate refugees, many of whom are living in difficult, even life-threatening, situations.”

While Jewish and interfaith groups are determined to push for a more welcoming approach for Syrian refugees, they are purposely avoiding any stance regarding the long-term future of Syria. Planning proposals for a postwar Syria span from a united multiethnic nation to breaking up the country into autonomous regions for the different groups. But members of the coalition deem this issue premature — and also likely to lead to the breakup of their alliance.

“That’s a political, not a humanitarian, question,” Greenberg said.