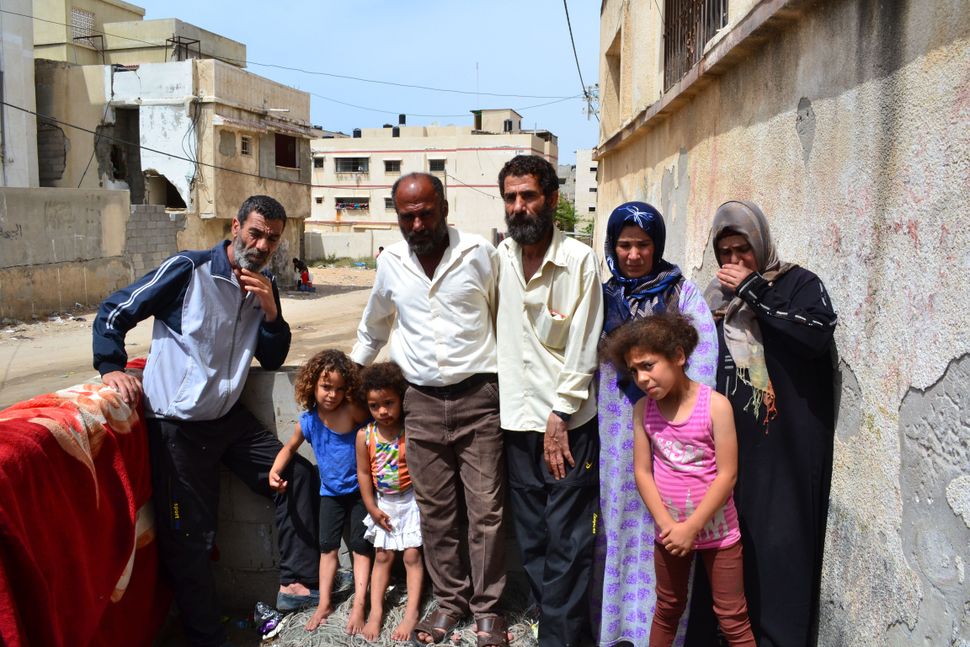 Communal Loss: Adults from left, Muhammad Subhi Bakr, Ramez Bakr, Ahed Bakr, Salwa Bakr, five of the parents of the four boys who were killed while playing on the beach in Gaza City, gather in the family compound. Image by Naomi Zeveloff 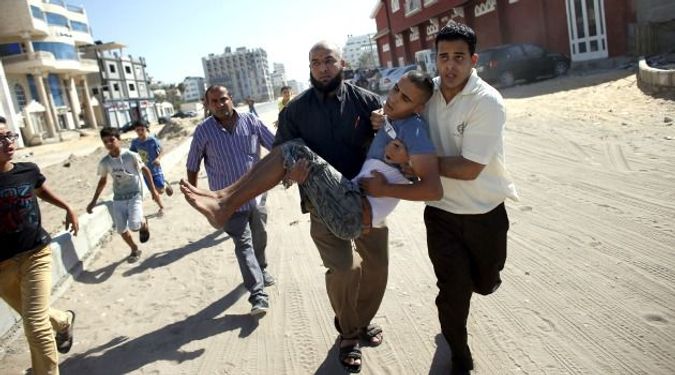 Muhammad Subhi Bakr was once an avid fisherman. But now the 53-year-old can barely bring himself to go to the Gaza City beach, where his family has run a fishing business for generations.

That was where his son Ismail died in an Israeli strike last summer during Israel’s 51-day war with Hamas. Ismail was one of four young cousins aged 9 to 11 killed while playing on the beach July 16 in one of the most high-profile incidents of the war. The event became instantly emblematic of the high civilian death toll on the Palestinian side. More than 2,200 Palestinians, including hundreds of children, were killed in the war. Sixty-six Israeli soldiers and six civilians also died.

READ: At Kibbutz Near Gaza, Wounds Are Still Healing 1 Year After War

In June, an Israeli military investigator concluded that the incident did not warrant criminal charges because the soldiers had mistaken the boys for Hamas fighters as they played in an area “utilized exclusively by militants.” Meanwhile, a United Nations report found “strong indications” that Israel failed to uphold international law in this case by not taking all feasible measures to protect civilians. Based on the report, the United Nations Human Rights Council recently adopted a resolution condemning Israel’s actions during the war.

When I met with members of the Bakr family in May, they had no comment on the probes, still ongoing at the time. They held out hope that Israel would be tried for war crimes in the International Criminal Court. Yet the investigations are a distant backdrop to their day-to-day grief. One year since the incident, the Bakrs continue to mourn for their young sons, who would have been fisherman, now laid to rest in a cemetery by the Mediterranean.

Muhammad Bakr said he wanders the beach looking in vain for his son’s body parts in a grim mourning ritual. Once the source of his livelihood, the Gaza port has become the scene of his nightmares.

“We were devoted to the sea,” he said, “but not anymore.”

The Bakrs live a few minutes’ drive from the beach, in a Gaza City neighborhood known as Bakr Land, home to some 3,000 members of the clan. Unlike the many Gazans who came to the strip as refugees from the Arab-Israeli war in 1948, the Bakrs have lived in Gaza for hundreds of years. Family lore has it that they journeyed to Gaza from Saudi Arabia, where they were also fishermen. Longtime supporters of Fatah, the Bakrs have sometimes had a tense relationship with Hamas, Fatah’s rival Palestinian faction that rules Gaza.

On a humid afternoon in May, I visited several members of the Bakr family at the home of Muhammad Bakr’s sister, Salwa Bakr. Her son, also named Muhammad, was one of the four killed that day. When I arrived at the three-room apartment, two boys were outside leaning over a concrete barrier that had been draped with green foam pallets. These pallets were the children’s mattresses.

Inside, a young girl was slipping across the linoleum floor in adult-size gold high heels. Soon, another daughter walked in with two corncobs wrapped in paper, which Salwa Bakr split among the children. Yet despite the activity, the apartment had a muted air.

Salwa Bakr sat on a chocolate-brown couch in the front room. Before the interview began, she requested that I not ask her to take me to the cemetery, as other journalists had done. With the one-year anniversary of the deaths nearing, the family was receiving journalists constantly, reliving that day in a harrowing loop. 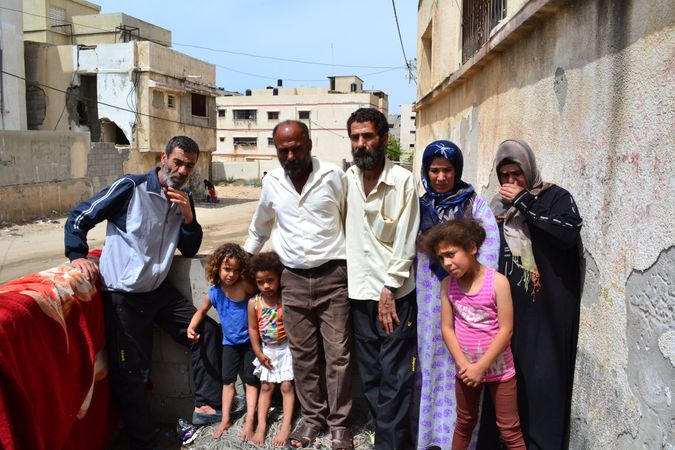 Communal Loss: Adults from left, Muhammad Subhi Bakr, Ramez Bakr, Ahed Bakr, Salwa Bakr, five of the parents of the four boys who were killed while playing on the beach in Gaza City, gather in the family compound. Image by Naomi Zeveloff

But the family also sees the media as an integral part of bringing the case to light. The attack took place just outside Al Deira Hotel, where many journalists were staying during the war. Several reporters were firsthand witnesses to the event, and some performed first aid.

“We were lucky that it was captured by international media,” Muhammad Bakr said. “Otherwise, Israelis would have said it was ‘resistance’ on the beach.”

The boys — Muhammad, Zakaria, Ismail and Ahed — were a tight-knit quartet who often spent the night together and once built themselves a play area out of concrete. The elder Muhammad Bakr said that he had a special kinship with the foursome, who used to rollick at his home.

“We feel that since, we have lost the spirit and the soul of our house,” he said.

Ismail was his healthiest child. Because Muhammad Bakr’s vision problems made it difficult for him to work, Ismail quit school and began selling tea and coffee at the Gaza Seaport to earn money for the family. He also fished with his brothers, catching sardines in the Mediterranean.

“My child was a man who sacrificed his future just because he knew that the family wanted help,” he said, gesturing with a cigarette as he spoke.

On the day his son died, Muhammad Bakr said that Ismail had asked his wife, Sahar Bakr, to make maftoul, Palestinian couscous, for the Ramadan evening meal. Ismail went grocery shopping with her to purchase chicken and vegetables. When they returned home he played soccer in the street with his cousins. Later in the day the boys went to the beach to cool down. Muhammad Bakr said that on their way a journalist warned them that the beach was dangerous, but they continued, intent on kicking a ball in the sand. Just after 4:00 p.m., an initial blast sent the boys running in the direction of Al Deira Hotel when another Israeli missile targeted them.

Muhammad Bakr was lying down at home when he heard a woman outside screaming his son’s name. He rushed out of bed, dressing himself as he ran downstairs. He saw on television that four boys had died in an Israeli strike, but his neighbors couldn’t tell him who they were. He jumped onto a horse-drawn cart with his wife and sped toward the morgue.

There were more than 400 Bakrs there. Bakr soon learned that Ismail was one of the four who had died. As he made his way through the morgue, people begged him not to look under the sheet covering Ismail’s small form. He went into the street, where men were fainting and women slapping their own cheeks. There were hundreds of cameras. Bakr said he lost consciousness. The Bakr boys were buried that afternoon.

Salwa Bakr cannot stop replaying that day in her mind. Hours before her son Muhammad died, she woke him up to run an errand for her. Another son was in the hospital with a heart condition, and the doctors needed paperwork from her. She sent 10-year-old Muhammad with the papers, and when he returned he began to play soccer with his cousins.

“I woke him up to get him killed,” she said over and over again.

Now, Salwa Bakr has stopped taking care of her appearance, she said; her old routines feel meaningless. Her mornings are filled with housework and child care, and her afternoons are often spent meeting with journalists.

“I just live because I have no other choice,” she said.

Muntasser, the 12-year-old brother of Zakaria, was injured in the attack and lives with deep emotional wounds. His father, Ahed Bakr, said that Muntasser lashes out at his young cousins and wets his bed. At night he dreams that he is playing with the other children. When he sees a report about his cousins on television, his limbs go limp in shock. His family has difficulty affording his powerful antipsychotic medications. Usually, Hamas provides money to “martyrs” who died at Israel’s hands. But the Bakr family said they have not received the money.

“I can evaluate Hamas’s performance and assistance by saying they did zero for us,” Ahed Bakr said.

After the interview, Salwa Bakr gave me a brief tour of the family home. One corner of the living room had been turned into a memorial for her son. She stopped by a shelf where there were four plaques honoring Muhammad: two from Islamic Jihad and two from Fatah.

Picking up one, she smiled at her son’s photograph and kissed it three times.