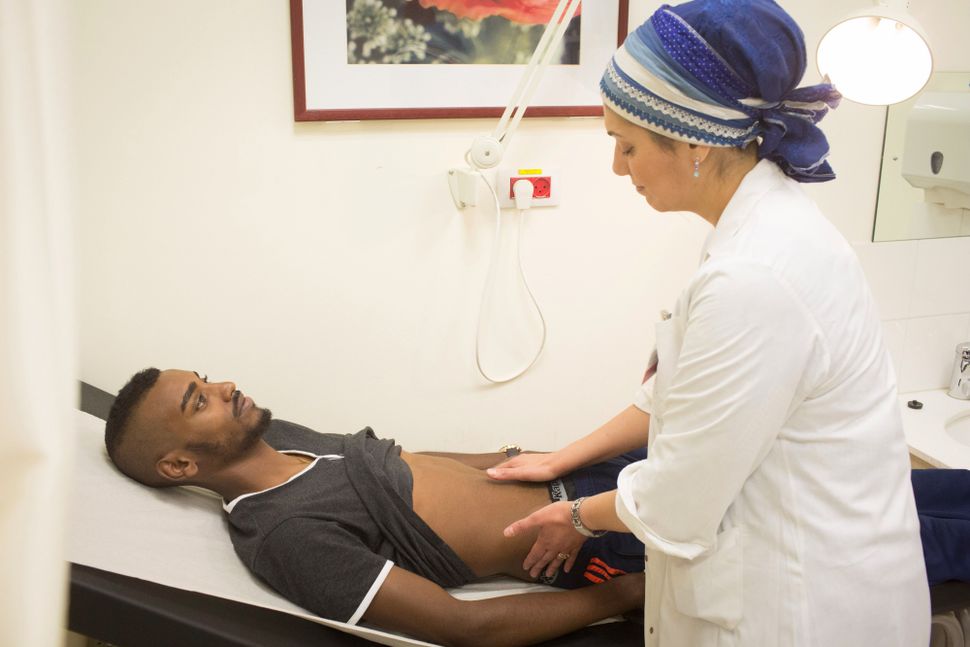 Yosef Yabarkan was a six-year-old boy in 1999 when he left his village in Ethiopia with his parents and nine sisters. Like tens of thousands of Jews before them, they made the 1,600-mile trek north to Israel. The family left behind a thatched hut surrounded by farm animals in the Tigray region near the Eritrean border and moved into a third-floor apartment in Jerusalem.

Yabarkan recalls a happy Israeli childhood filled with soccer games and Talmud studies. But in his last year of high school, he started having health problems. One day, during his shift at the grocery store where he worked at the time, he started feeling pangs in his gut. He went to the bathroom and then home to rest, but the pain wouldn’t go away. By the next day, Yabarkan could hardly get out of bed.

At first, doctors suspected it might be appendicitis. But a colonoscopy revealed that it was Crohn’s disease.

Crohn’s is a gut disorder in which the body’s immune system mistakenly attacks and destroys healthy tissue in the digestive tract. Crohn’s and the closely related condition ulcerative colitis are particularly common among Ashkenazi Jews, who have one of the highest incidences of inflammatory bowel disease — as the two intestinal disorders are collectively known — of any ethnic group in the world.

In Israel, where about one-third of the world’s Ashkenazim live, about 1 in every 220 people — some 37,000 in total — suffer from IBD. But in Ethiopia, Crohn’s and colitis are practically unheard of, among Jews and non-Jews alike.

IBD is now on the rise, however, among Ethiopian Jews who have moved to Israel. In a study published earlier this year in the journal Inflammatory Bowel Diseases, a team of leading Israeli gastroenterologists described IBD as an “emergent disease” that Ethiopian Jewish immigrants need to be mindful of.

As doctors puzzle out why patients like Yabarkan are developing IBD in growing numbers, they are now trying to raise consciousness among those at risk of the health problem, which can result in severe abdominal pain, recurrent diarrhea, weight loss, hospitalization and surgery.

“This community can develop these kinds of diseases even though it is very uncommon in Ethiopia,” said Dr. Ariella Shitrit, a gastroenterologist at the Digestive Disease Institute of the Shaare Zedek Medical Center in Jerusalem and the lead author of the new study. Ethiopian Jews “have to be aware of the symptoms and come in for an evaluation as soon as possible.”

The news of the diagnosis hit Yabarkan hard. “I didn’t know how to handle it,” he told the Forward, speaking in Hebrew through an interpreter. He had been looking forward to joining the army’s infantry division after graduating high school. But with his medical condition — which caused him to lose more than 30 pounds — he was no longer eligible for army service.

“I was very frustrated,” said Yabarkan, now 22 and studying to be an electrician. “I didn’t know why it was happening to me.”

Prompted by cases like Yabarkan’s, Shitrit and colleagues from seven of Israel’s largest hospitals conducted the first case-control study of IBD among Ethiopian Jews in the country. Over a 27-month period between 2011 and 2013, the physicians identified 32 Ethiopian Jewish patients with IBD (one of whom was Yabarkan). They compared the characteristics of these individuals with an equal number of Ashkenazi Jewish patients.

The doctors found some stark differences between the two patient populations.

Whereas nearly half of the Ashkenazi patients had a relative with the disease, no Ethiopian in the study had a family history of Crohn’s or colitis. What’s more, no Ethiopian was diagnosed before moving to Israel; all had lived in the country for at least eight years before developing IBD.

Genes are known to be a major determinant of IBD among Ashkenazim around the world. And Ethiopians undoubtedly harbor some gene variants that elevate their risk of developing the disease. However, the fact that the IBD prevalence has shot up in recent years among Ethiopian Israelis, with no concurrent changes to their DNA, suggests that the surge in cases has more to do with differences in lifestyle and surroundings than it does with genetics.

“Our observations support the idea that environmental factors are contributing to the etiology of the disease,” said Shitrit, “and now we are looking for those factors.”

There are currently around 116,000 people of Ethiopian origin living in Israel. Doctors estimate that 45 to 65 of these individuals have been diagnosed with IBD.

And IBD is not the only problem on the rise. Anecdotal reports from Israeli doctors suggest that more and more Ethiopian Jews are also falling ill with diabetes and celiac disease. These disorders, like IBD, share a common feature: the immune system gone awry.

Many experts suspect that the general cleanliness of life in Israel could explain the uptick in these autoimmune diseases among the country’s Ethiopian Jews.

“Basically, what you are seeing is the sanitation hypothesis,” said Dr. Jerome Rotter, a medical geneticist at the Los Angeles Biomedical Research Institute, a not-for-profit located on the campus of the Harbor-UCLA Medical Center. This hypothesis holds that hygienic environments can predispose people to diseases like IBD because, in the absence of regular exposure to worms, bacteria and other pathogens, the immune system starts to erroneously fight against the body’s own cells.

This idea is consistent with the observation that the prevalence of IBD among Sephardim rose throughout the 20th century as more people moved to industrialized Israel from less developed countries in North Africa and the Middle East.

But other factors associated with rising living standards might be involved as well. For example, changes in diet, antibiotic use and vaccinations can all negatively impact the community of microbes living in our gut, with consequences for the development of IBD and other autoimmune disorders.

To better understand the root causes of IBD among Ethiopian patients, Shitrit and her colleagues are now collecting data on the composition of gut bacteria and various other health metrics. They are also looking at the genes of Ethiopian patients.

Yabarkan hopes that these efforts can help explain what caused him to be afflicted with Crohn’s disease in the first place. Growing up in rural Ethiopia, his immune system was probably exposed to more pathogens than it is now in Jerusalem. But as a teenager in Israel, he also started to eat more Western-style junk food.

So, what was the primary driver of his disease?

Yabarkan continues to wonder. But as a religious man, he has come to peace with his diagnosis. “It’s all in the hands of God,” he said.

Elie Dolgin is a science writer in Somerville, Massachusetts.