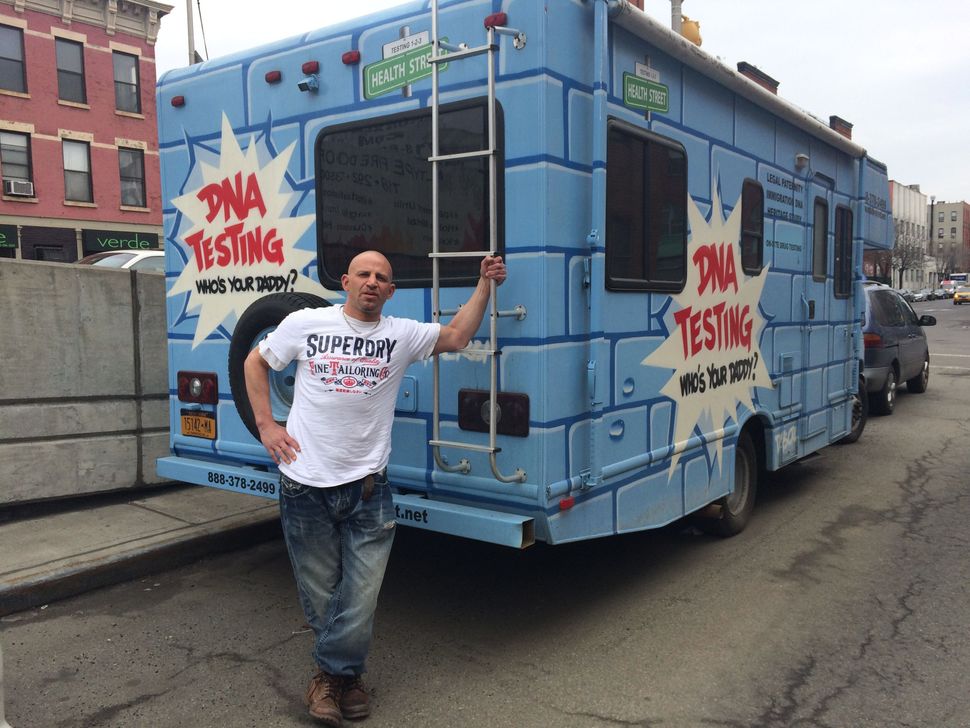 It may look like Jared Rosenthal is cruising around New York City in an oversized ice cream truck, but the 45-year-old entrepreneur is selling a commodity far more precious than a frozen treat: He’s offering DNA tests to confirm paternity and other biological connections to anyone willing to shell out $350 for the information.

With the slogan “Who’s Your Daddy?” the 27-foot-long Winnebago doesn’t roll through the five boroughs unnoticed. Passersby point, snap photos and flag down Rosenthal for a business card and the chance to unlock a family secret.

The DNA-mobile has also earned Rosenthal the reality TV series “Swab Stories,” which premiered in the spring on VH1 and is packed with enough drama that some reviewers have likened his rig to a “Maury Povich on wheels.” But Rosenthal said he’s trying to fight that crass image. His clients hail from diverse socioeconomic backgrounds and seek his services for an array of reasons. The results they receive just as often inspire family reunions as Maury Povich-style fights.

On a recent day in Manhattan, Rosenthal parked his vehicle at 86th and Lexington and waited in the driver’s seat. The billboard soon did its magic. After only a few minutes, three teenagers stepped through the door. “Is this legit?” one of them inquired nervously of his friend. “I heard about this guy on the radio,” his friend answered in an undertone. “He’s for real.” Rosenthal introduced himself and shook their hands. Then they sat in the back of the RV and launched into their stories, with Rosenthal listening, his chin in his hands.

David, a tall, lean 16-year-old with closely cropped blond hair and blue eyes, explained that he was adopted at birth by an Israeli mother and American father. He was converted to Judaism when he was only a few days old. Even though his parents were open about the fact that he was adopted, they discouraged him from finding his real parents. But David, whose last name is being withheld to preserve his privacy and because he is a minor, now found himself in the midst of an identity crisis. “Everyone tells me I look German,” he said. “I want to find out if I really am.”

The other boy told a similar story. His parents adopted him at birth, but he knew the name and state where his birth mother lives. He wanted to find her and confirm their relationship, although his parents had discouraged it. Rosenthal asked a few questions. When he discovered that both boys were 16, he explained they would have to get parental approval for the test because they were underage. They left, visibly disappointed. “They’ll be back when they are 18,” Rosenthal said.

Their stories are familiar ones to Rosenthal, who said he has heard it all. “This really gets you thinking about this whole issue of identity and what makes you who you are,” he mused. “People are obsessed with identifying themselves by what group they are from. But what if you find out you are not really what you think you are? That’s really hard.”

A lesson Rosenthal learned over his five years in the business of DNA testing is that secrets can cause great pain. “The results can change your whole ethnic identity,” Rosenthal said. When test results threaten to have a significant impact on the person, Rosenthal offers to deliver the news in person, in the comfort of his RV or his Bronx office. Otherwise, clients learn of the outcome through the mail. Rosenthal, who has a bachelor’s degree in psychology and experience working at youth homes, psychiatric hospitals and schools, said he is qualified to deliver potentially life-changing news.

Chani Wiesman, a genetic counselor with the Program for Jewish Genetic Health at Montefiore Medical Center, said most genetic counselors don’t conduct paternity testing on a regular basis because it doesn’t fit into the medical model of genetic testing.

The procedure is simple: Customers get swabbed on the inside of their cheeks and the specimen is placed into an envelope, which is sent to a lab. Paternity testing is done through DNA profiling, which tests a region of the DNA known as short tandem repeats. Half of a person’s STRs are inherited from the mother, and half from the father. If fragments of a person’s STR profile don’t match the supposed father, he is not the biological parent. According to Thomas R. Reynolds, the executive vice president of science and technology at AlBioTech in Richmond, Virginia, DNA profiling can establish paternity with a 99.9 percent probability. Results are typically available within a week.

Wiseman noted that there are a host of direct consumer options out there, including ancestry.com or 23andMe, for those who are interested in finding out more about their ancestry, but warned consumers to be wary about unlocking their secrets. “Genetic testing can often have serious and varied implications and those who choose to pursue it should avail themselves of reliable resources to prepare for these possible implications,” he said.

Sometimes, the results are gratifying: Katie McGlabe, 22, a waitress in Bethlehem, Pennsylvania, recently confirmed the identity of her biological brother and sister, thanks to a DNA test with Rosenthal. “It was a very positive experience,” said McGlabe, who was adopted at birth and never knew her biological family. About a month ago, she found a woman who claimed to be her biological sister, who told McGlabe that she also had a brother. The three opted to confirm their relationship through a DNA test. “I was so happy. We all looked at each other and group-hugged,” she recalled.

Rosenthal said his clientele comes from all walks of life. “I can tell you this affects everybody. It’s not a thing people openly talk about,” he said. “But we get everyone — wealthy, poor and from every ethnic group — who are not sure about a long lost father or if their kid is really theirs. I’ve had people on the Upper East Side, people in Borough Park and people from other countries who all had these issues.”

Rosenthal, an Upper West Side resident, displayed a keen sense of business smarts and chutzpah from a young age. He grew up in a Conservative Jewish home in Marlboro, New Jersey, where he attended Hebrew School and celebrated his bar mitzvah. He sold baseball cards and tarred driveways to earn cash. He attended the University of Michigan, and completed graduate school in health care administration. He worked for several years for a health care company that provided insurance for low-income communities. And then there was the mobile drug-testing business: “I put a cup of urine on the side of the truck. That didn’t work out too well,” Rosenthal said. “They called it the pee-mobile.”

Once he started DNA testing, he figured he might as well go for the “Who’s Your Daddy?” logo. “It’s a little unnerving at first but it works,” he said.