An Island Haven for Turkey’s Jews 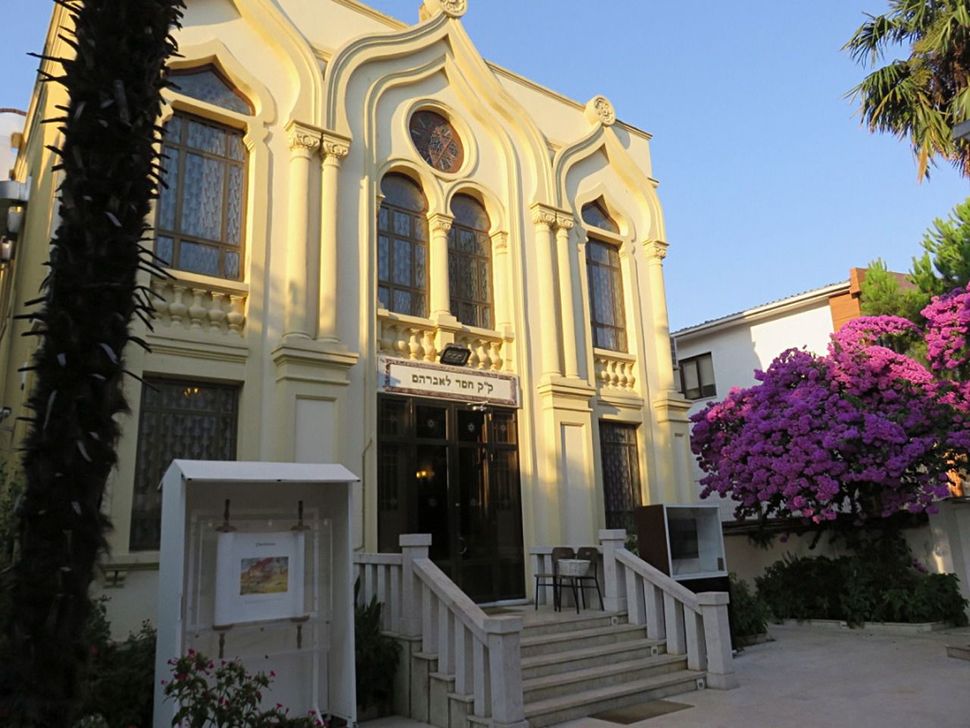 I’m pretty sure I’ve missed a turn on the winding, bougainvillea-filled backstreets of Buyukada, an idyllic island about an hour’s ferry ride from Istanbul. A horse-drawn carriage filled with vacationers — some wearing headscarves — whips by. Suddenly, an older man in an immaculately pressed suit and silk tie appears in front of me. Next, a woman walking at a brisk clip, and another man, races ahead.

On a hunch, I follow them around a corner and to the right, revealing a quiet street blocked by a police barricade. They’re waved through, but I’m an unfamiliar face. Guards take my passport and conduct a body scan. Only then do they heave back the hefty metal door, revealing an exquisite, oriental-style synagogue with a dome top. Lively chants from Sabbath services fill the shady courtyard.

Almost 10 years ago, my husband and I discovered Hesed Le Avraam, the island’s only synagogue. It dates back to 1904, when members of Istanbul’s thriving Jewish population — along with Armenians and Greeks — started summering on Buyukada to escape the city heat. From a peak of hundreds of thousands of Jews living in the region during Ottoman times, Turkey’s primarily Sephardic community has dwindled to an estimated 17,000, living almost exclusively in Istanbul. Many of them spend their summers on Buyukada, part of a small archipelago.

Even as the nation’s ruling Islamic AKP party fans a new wave of anti-Semitism, Buyukada remains an oasis of calm. Just like generations before them, families board commuter ferries that skim across the rich blue Sea of Marmara, transporting them back in time. Step onto the dock and there are no cars, only festive horse-drawn carriages, bikes and an occasional electric cart. Children from Istanbul’s synagogues grow up together on the island. Here they meet future husbands and wives and return with their own children.

Hard numbers are difficult to come by, but locals estimate that during the summer, the Jewish community balloons to anywhere from 3,000 to 4,000, with its own swim club and youth camp, two kosher butchers and a kosher restaurant. A few years ago, the Hebrew-lettered signs identifying them came down, coinciding with a boom in Arab tourists from throughout the Middle East.

My Turkish mother and American father first brought me to Buyukada when I was 11. Decades later I came back with my 12-year-old daughter, my husband and his relatives. In search of Sabbath services, we happened on the synagogue and found ourselves joining a Sabbath dinner in the courtyard. In the years that followed we’ve enjoyed lavish homemade Sabbath feasts at a congregant’s home.

This summer I was unsure what I’d find. Ugly, anti-Israeli rhetoric, led by President Recep Tayyip Erdogan, surged before recent elections. While Erdogan insists he’s not anti-Semitic, the average Turk doesn’t always make the distinction between Israel and Jews. Shock spread through the community after a newspaper crossword puzzle revealed Hitler’s profile, along with the words “We are longing for you.” A new poll found that nearly half of all Turks consider Israel the country’s biggest security threat.

After I climbed the steps and joined other women, the vibrant scene below me belied those grim headlines. Under a glittering chandelier, a loud chorus of men joyously sang out prayers, a uniquely Turkish blend of original Spanish and Ottoman melodies. A pack of excited children darted past the ornately carved ark with toddlers bouncing up and down by the bimah as a youthful rabbi held their hands.

There were no stern rebukes, and the casual attire — T-shirts emblazoned with Batman, Surf’s Up and a smiley face — made it feel like a summer holiday.

“This is all about the children,” said one congregant, a refrain I heard repeatedly from synagogue leaders.

“When I was a child, there were 200 kids on a Friday night. Now, maybe 70 to 80 or less,” recalled Murat Bildirci, a 46-year-old residential developer. “Buyukada is an oasis, but a shrinking one.” He once again invited me home for a softly lit, outdoor Sabbath meal. His mother-in-law and her sister, who both speak Ladino like the dwindling troop of elderly women at my hotel, prepared the dinner. We all trace our roots back to Spain. The conversation consists of his daughter’s hope of going to college in America; a dearth of economic opportunities for young, educated Turks; friends making aliyah; the high assimilation rate, and a shortage of brides. Last year, when my husband showed off a photo of our daughter, young men quickly made lighthearted offers of marriage.

For Bildirci, preserving the Jewish community is highly personal. On November 13, 2003, he was attending Sabbath services in Istanbul when terrorists detonated two bombs that shattered his synagogue and another, killing 20 people. Hundreds were injured, including Bildirci’s father, who insisted on going to services the next morning.

“The bombings have given us an immune system, so we don’t despair so easily,” Bildirci said. As co-president of communities under Turkey’s Chief Rabbinate, he encourages rabbis to make services more inviting to a missing demographic — 18- to 30-year-olds.

The community also lives with a fundamental question: Is their homeland safe?

“It’s a fear in our hearts,” a congregation leader said. Talking with congregants, one senses that it’s hard for them to imagine being physically attacked, yet it’s increasingly hard to feel comfortable in their own country. They talk about relatives and friends who’ve headed to Israel, North America and Europe, and about new citizenship opportunities in Spain and Portugal if Sephardic Jews can prove their origins.

For now, though, Buyukada remains a safe haven where the most immediate threat may be failing to dodge a horse and buggy speeding past villas, with Istanbul’s skyline in t he distance.

An Island Haven for Turkey’s Jews