Fact-Checking the Flame Throwers on Both Sides of Iran Deal 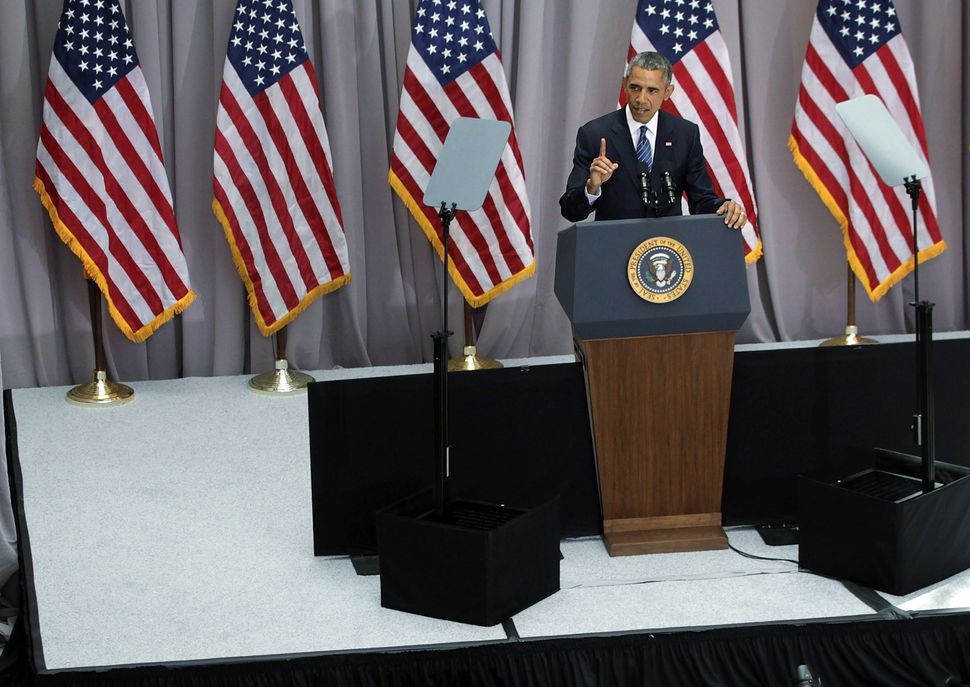 The rift between President Obama and many leaders of the organized Jewish community over the Iranian nuclear deal is out in the open. Beyond policy differences, both sides carry personal grievances. This became evident during Obama’s White House meeting August 4 with Jewish leaders, where much of the two-hour session was devoted to mutual accusations hurled, politely, across the table. Based on the full Joint Comprehensive Plan of Action and on published expert opinions, the Forward has tried to fact-check the key points of contention.

Critics claim that while the Obama administration had promised that Iranian nuclear activity would be carefully monitored and inspectors could carry out their work anytime and anywhere, the agreement is less certain. The American Israel Public Affairs Committee argues that carrying out inspections by the International Atomic Energy Agency “could be lengthy, followed by a problematic process to resolve Iranian objections. Inspections could require a 24-day approval process, giving Iran time to remove evidence of violations.”

The administration responds that this claim is misleading. Inspectors will have “anytime, anywhere” access to all known nuclear facilities. The 24-day process will apply only to suspected undeclared sites, and even they will be monitored from outside during the process. U.S. Energy Secretary Ernest Moniz said that Iran will not be able to “flush a lot of nuclear meth down the toilet,” as Israeli Prime Minister Benjamin Netanyahu put it, explaining that nuclear residue is impossible to conceal.

Netanyahu and AIPAC are right on one point: Non-nuclear secret activities, such as those involving weapon design, can probably be concealed in this time period, but framing the deal’s inspection regime as faulty is grossly exaggerated.

Critics point to the existence of two undisclosed side agreements between Iran and the IAEA that reportedly undo many of the assurances the deal was supposed to provide. These include an agreement on inspection protocols and one regarding Iran’s disclosure of its previous nuclear activity, known as Possible Military Dimensions.

Critics’ use of the term “secret side deals” is misleading, since there is nothing unknown about their content. The critics do, however, have a point when claiming that an important part of the inspection process will be carried out by a third party, excluding the United States.

READ: WHY WE SENT A REPORTER TO IRAN

The nuclear deal, if implemented, would allow Iran access to funds that have been frozen in foreign banks due to sanctions if certain steps are taken. Critics call this $150 billion windfall a “signing bonus,” arguing that it will flow to Hezbollah, Hamas, the Assad regime in Syria and other Iranian destabilizing players in the Middle East.

The U.S. Treasury has a different take. Not $150 billion but at best $125 billion is held in foreign banks, and of this sum, Iran will be able to withdraw only $50 billion to $56 billion, after deducting its obligations. Supporters of the deal say that of these smaller amounts, most will be used for restoring Iran’s economy, leaving only a fraction for funding its notorious Revolutionary Guard and neighborhood terror organizations.

So, while opponents of the deal clearly overstated the magnitude of the sanctions relief and neglected to mention that these are funds that belong to Iran and are not a bonus from the West, they still are correct to point out the potential damaging effect of even a few billion dollars becoming available for nefarious activity.

Critics of the plan believe its 15-year duration is too short and that when restrictions are lifted, Iran will get the international community’s approval to acquire a bomb. “Even if Iran fully adheres to the agreement, the United Nations Security Council will have legitimized Iran’s nuclear program and paved Iran’s path to a nuclear weapon after just 15 years,” AIPAC wrote in an analysis sent to congressional offices.

This argument has some practical truth, since most restrictions on enrichment will be lifted after 15 years. But it has a major flaw: According to the Non-Proliferation Treaty, which Iran has signed, Iran will still be prohibited from developing a military nuclear program. It may be easier for Iran to cheat in 15 years, but the deal does not “legitimize” an Iranian nuclear bomb.

Critics say that while the agreement stops most of the uranium enrichment cycles and alters the plutonium reactor’s structure, most of Iran’s infrastructure will remain, enabling it to turn the switch and fire up the centrifuges once the deal expires.

The White House says this is misleading because dismantlement was never the intent. The administration argues that Israel, AIPAC and critics of the deal were aware that negotiations were based on the premise that Iran maintains access to a civilian nuclear program and that the goal was to block its pathway to a bomb, not to dismantle nuclear facilities. Opponents may not like the fact that nuclear facilities are not dismantled, but their claim is irrelevant, since that was never on the table.

Snapback Will Not Work

Snapback is a term coined by negotiators to describe what will happen if Iran violates the nuclear deal after sanctions are lifted. All sanctions that were in place before the deal will be reinstated, forcing Iran into the same dire economic situation it was in before the deal.

The promise of snapback was meant to assuage concerns that once Iran gets what it wants from the deal, it will return to its nuclear path. But critics argue that snapback will never be effective. They say it applies to only major violations and exempts international companies already working in Iran on contracts signed before the violations. This is indeed a major loophole, although there is no way of knowing how significant a portion of Iran’s trade these exempt companies will represent.

It’s Either the Deal or War

This has been Obama’s strongest argument against those opposed to the deal. If you kill it in Congress, he said, there would be no other option but war. That’s because disapproval would end the diplomatic effort to solve Iran’s nuclear problem, leaving only two options: Accept Iran as a nuclear power, or turn to a military option.

It is a powerful argument that resonates strongly not only with progressives but also with many Americans still reeling from the trauma of the Iraq war. Obama’s critics say this is an unwarranted alarmist approach. Their alternative is resuming sanctions and pressure, eventually leading to a better deal.

Both arguments are based on unproven assumptions.

It would be difficult, perhaps impossible, to return to sanctions-pressure-negotiations now, mainly because the international coalition no longer exists and unilateral American pressure will yield limited results. But the claim that this means the only option left is war is hyperbolic. Iran’s race to the bomb would still be slowed, and there is no reason to believe that the international community will not be able to come up with a new pressure mechanism, perhaps not as effective, to curb the process before military intervention is required.

Fact-Checking the Flame Throwers on Both Sides of Iran Deal