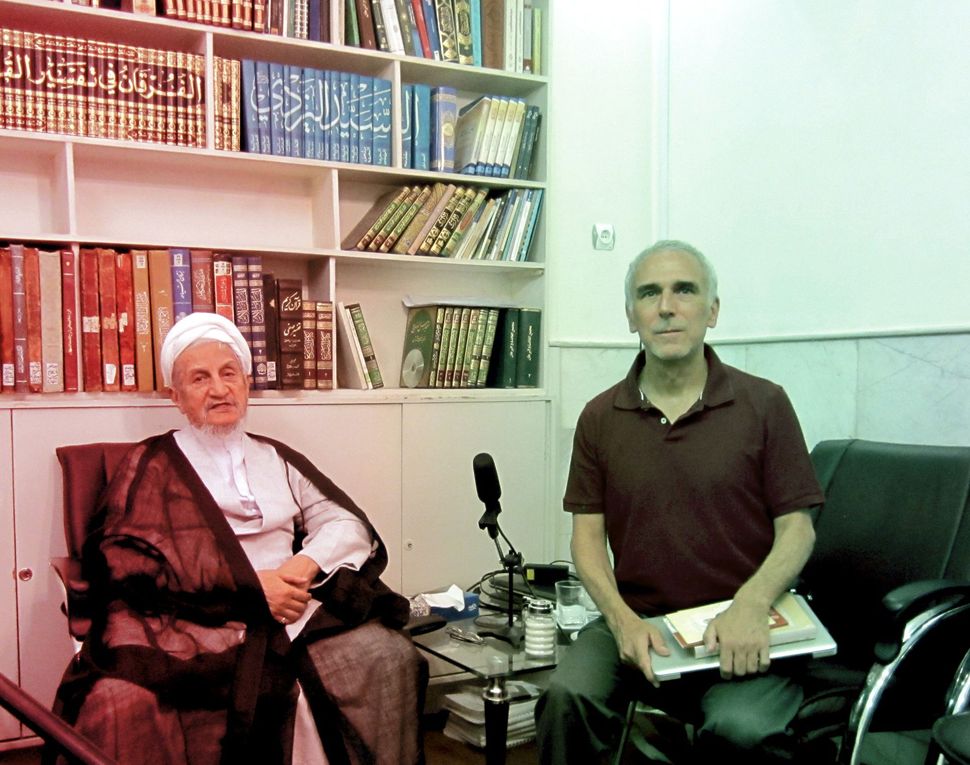 Image by Courtesy of Larry Cohler-Esses

In September 2013, the Forward’s Larry Cohler-Esses attended an 80-minute press conference called by the new president of Iran. Listening to Hassan Rouhani among a large gaggle of reporters just near the United Nations is not how Larry usually spends his work hours. As the assistant managing editor for news, Larry assigns and edits stories, and rarely leaves the office to do his own reporting.

But he was at the press conference that day for a reason. His deep interest in Iran dated back more than 35 years, to a time before the Islamic Republic became the great enemy of the United States and Israel, and he wanted to interview Rouhani, a reformer in office for just a few months, who was making his first address before the General Assembly.

The interview never happened. But his encounter that day with a press officer at Iran’s permanent mission to the U.N. eventually led to the groundbreaking story published in today’s Forward, the very first credentialed reporting from a member of the Jewish media since the Islamic Republic was founded in 1979.

The press officer that day encouraged Larry to apply for a visa — a request that was denied repeatedly. Larry’s office is right next to mine, and he’d occasionally let me know of his progress, or lack thereof, but honestly, it didn’t register.

I knew that Larry had an intense interest in Iran, where he had lived for two years after college before the fall of the shah, because he would regale us with stories, speak a few words of Farsi and pontificate on the intricacies of Iran’s byzantine government. Still, a visa? What a long shot! Given the vitriol spewing from some of Iran’s leaders against Jews and Israel, why would they grant entry to a Jewish journalist writing for a Jewish newspaper that, while sometimes critical of Israel’s government, is an ardent believer in Israel’s right to exist as a Jewish state?

But, no surprise to anyone who knows him, Larry was persistent. Sometime this past spring he learned that it would help his cause if one of Iran’s Jewish leaders wrote a letter supporting his visit. Thanks to the effort of a mutual friend, one of the country’s most well-regarded Jewish leaders did so at the end of May.

Then in June, Larry and I were invited to meet with the Iranian press officer (who asked that I not publish his name). I approached the meeting a skeptic, until it became clear that approval of Larry’s visa this time was actually likely. The Foreign Ministry had supported his application, and if the Ministry of Culture and Islamic Guidance did, too, he’d be in.

That’s when I started to worry. I peppered the press officer with questions about the safety of journalists, citing the outrageous detention of Jason Rezaian of The Washington Post, about whom I had editorialized only weeks before. Rezaian was a separate case, I was told. He had Iranian citizenship.

And the fact that Larry writes for a Jewish publication? No problem, we were assured.

The approval came about two weeks later, granting Larry a seven-day visa that he had to use within 30 days. Then the scramble began — to get the visa stamped in Washington, to find a computer scrubbed of any files should it be confiscated, to find a way to pay for travel in a nation without access to international banking or credit card services. (The answer: Bring cash. Lots of it.)

Beyond logistics were the substantive journalistic challenges. How could Larry report independently in a country whose very laws don’t even nod to the concept of press freedom? How could we ensure readers of the objectivity of his work?

Like all nonresident journalists, he was required to use a government-approved fixer to set up his itinerary, and a translator that the fixer employed for his interviews. But he selected the people he wanted to interview, and had researched a request list so long that his minders had no plausible excuse to choose people beyond it. And, as his story illustrates, the most striking feature of contemporary Iran is the ability and willingness of ordinary people to criticize their government.

Even Larry’s translator made his independence clear. “Over our intense week together,” Larry told me, “my translator was quite candid about his own views of many government positions. His personal history and family background was far from that of a government stooge.”

Still, as his editor, I am mindful of the fact that the debate over the proposed nuclear deal with Iran is of huge importance to American Jews, and how the Forward presents the attitudes of Iranians could shape that debate one way or another. We had no agenda here except to tell a sensitive story with accuracy, objectivity and historical context.

Those looking for assurances that access to trade and credit will help Iran evolve into a more enlightened nation, bettering the lives of its people and ceasing the export of terror and destruction abroad, will find ample evidence in this story. But those who worry that Iran’s hatred of Israel and the United States continues unabated, that it is not to be trusted with nuclear potential, will find plenty to support those views, too.

This is not a simple picture. Iran remains chilling, hopeful, enigmatic. Illuminating that complexity is our singular contribution to what has become a toxic conversation in too many quarters of the American Jewish community. And for that, I thank the tenacious, courageous, dedicated journalist in the office next door, who saw a story and pursued it in the best tradition of our craft.