When Leo Frank Was Lynched a Century Ago 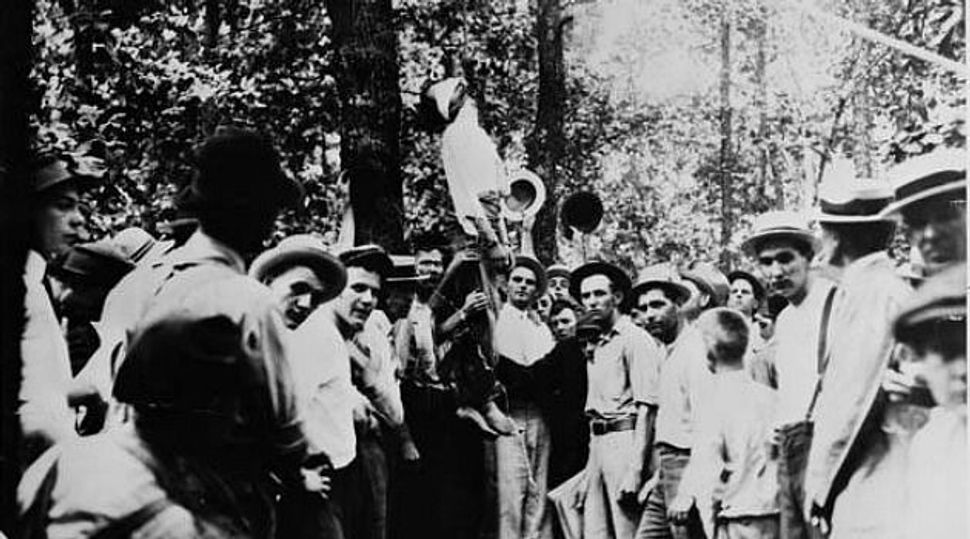 That’s how readers of the Yiddish Forverts learned on August 17, 1915, of the shocking murder of Leo Frank.

It gripped the Forverts too. This newspaper’s founding editor, Abraham Cahan, covered Frank’s case from 1913 through 1915, constantly protesting Frank’s innocence.

This week, the Forward will republish a handful of Forverts articles printed following the lynching, showing how, day by day, Yiddish readers came to learn and think about the tragedy.

Frank was the superintendent of the National Pencil Factory in Atlanta in 1913 when Mary Phagan, a 13-year-old white employee, was murdered. Frank, 29, was an interloper in Georgia: a northerner and a Jew. The police quickly seized on him as a suspect. His trial, conducted in an atmosphere of rampant anti-Semitism and anti-Northern sentiment, led to his conviction and sentencing to death in the summer of 1913.

The following year, Cahan visited Atlanta where he found Frank in his cell, a “thin, brown haired young man with impressionable, intelligent eyes.”

During his confinement, Frank’s advocates cast enough doubt on his conviction that Georgia’s governor commuted his sentence to life in prison, in June 1915.

It was a wildly unpopular decision in Georgia and not enough to save Frank’s life. He was moved to a rural prison 100 miles away in Milledgeville where, within a matter of weeks, an inmate slit Frank’s throat.

Frank survived the attack. But on the night of August 16, a lynch mob. organized by the leaders of Cobb County where Phagan’s family lived, stormed the prison. They bundled Frank into a car and drove him 150 miles to their county seat of Marietta, where they lynched him at dawn.

Frank’s widow, Lucille, ordered that Frank’s body be returned to his hometown of New York, for burial.

The Franks did not have children. But today, at his gravesite, descendants of his relatives, along with Jewish leaders, including representatives of the Anti-Defamation League, which was formed in the wake of Frank’s lynching, will hold a memorial service at Mount Carmel Cemetery in Queens.

The cemetery also happens to be the burial site of Cahan, who so presciently predicted in his first editorial one day after the lynching that Frank’s killers would never be brought to justice.

“Will the police be as nimble here in finding the guilty?” he wrote on August 18, 1915. “Will they really place the accused on the bench? Will they prove that murder is murder and that blood spilled cannot be tolerated in an organized society?

“We have every right to doubt it. The history of many such murders speaks clearly.”

When Leo Frank Was Lynched a Century Ago