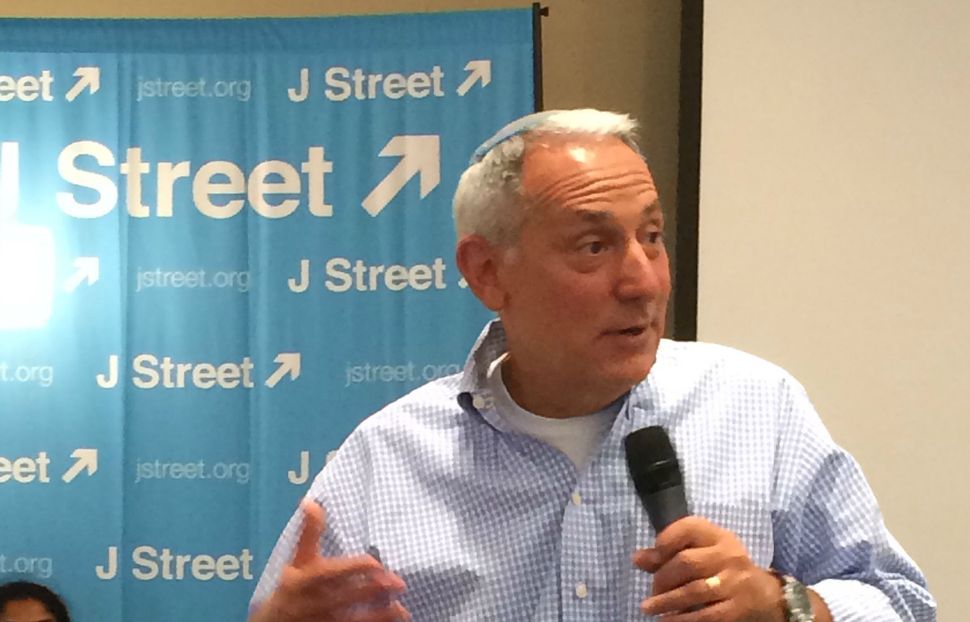 Hoping to “wipe the slate clean,” Hillel International’s president and CEO Eric Fingerhut stepped into the lion’s den Monday for a face-to-face meeting with campus leaders of the dovish lobby J Street.

Although he sounded all the right notes, Fingerhut offered little in the way of substance to mend the rift between Hillel, the national Jewish campus organization, and J StreetU, the campus arm of the liberal lobby.

“If I have done anything to cause personal hurt or pain in this past year to anyone in this room, I ask that you forgive my transgression,” Fingerhut told the student leaders gathered outside Washington D.C. for their summer conference.

“I know that sometimes you have also been subjected to unfair criticism,” he later added. “That is wrong too, and contrary to Jewish principles.”

Relations between the two groups have been fraught ever since Fingerhut pulled out of the group’s conference last March, following pressure from Hillel donors. Monday’s meeting was an opportunity to mend fences and as such it registered only partial success.

Extending a welcoming hand to J StreetU helped disarm much of the tension built between the group and Hillel over the past year. But at the end of the meeting many of the differences surrounding the Israeli-Palestinian conflict remained as wide as ever.

Fingerhut’s last minute decision this March not to speak at the J Street conference triggered protests from J Street’s student activists, who had argued that Hillel’s chief caved in to pressure from conservative donors to the organization who do not view the left-leaning campus group as a legitimate partner. On Monday, Fingerhut sought to shield Hillel donors from the student’s criticism, telling the J StreetU activists that “there is nobody responsible for any hurt that was caused in March besides me.”

Fingerhut went to great lengths to try and convince members of the left-leaning student group that despite suspicion toward their organization in some corners of the Jewish community, they are an integral part of the campus Jewish community.

“Let me say this again — all students are invited and are welcome at Hillel,” Fingerhut said.

Trying to draw the boundaries of Hillel’s communal tent, the group’s leader said it “welcomes and supports pro-Israel groups and students who have different opinions on the peace process” while making clear that organizations that support boycotting, divesting or sanctioning Israel (BDS) cannot come under Hillel’s umbrella.

Each side entered the meeting, which ran just over an hour, with a different set of goals. Fingerhut wanted to recruit J StreetU activists to the battle against BDS campaigns on campus, while the students wished to hear a clear recognition from the largest Jewish campus group’s top official that Hillel is committed to bringing about a two-state solution to the Israeli-Palestinian conflict.

It’s not clear that either side got what it wanted.

“I and students like me honestly don’t know what to do when we go back to school in a few weeks,” Stanford Student Zoe Goldblum told Fingerhut, describing her difficulty to convince non-Jewish students to reject BDS without being able to assure them that the broader pro-Israel campus community also supports an end to Israeli occupation. The choice between expressing her support for Israel and her opposition to oppression, she said, is “heart wrenching.”

Fingerhut attempted to underscore Hillel’s commitment to human rights and activism on social issues that could resonate well with the J StreetU crowd. He argued that Hillel and its donors, who apparently tilt strongly to the right, support of a peaceful resolution to the Middle East conflict.

“I truly believe that the pro-Israel organizations on campus across the road are for peace, for dignity for the Palestinians, for human rights and for all the policies you are speaking of,” he told the activists. “They have a different view as how best to accomplish this goal.”

This explanation, while politely received by the students, did little to convince J StreetU members they are on the same page as Hillel. “& with that, @eric_fingerhut ends talking to @jstreetu students without once acknowledging the occupation” tweeted one of the participants, making clear that despite the positive atmosphere, differences still exist.