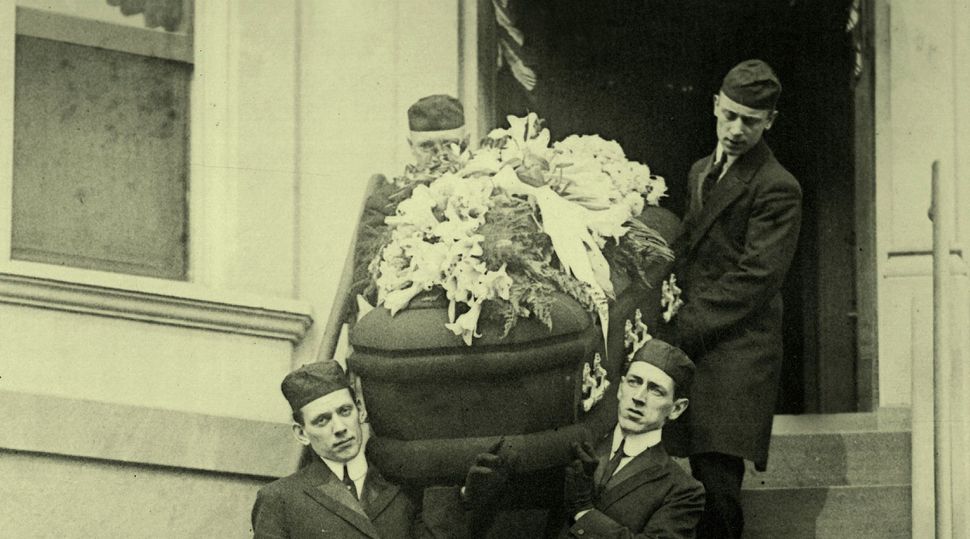 It’s a simple gravestone, a small, ground-level marker identical to the four stones beside it. Nothing about the inscription, “Semper Idem” —“ Always the same” — hints at the significance of this 31-year-old man’s untimely death.

But here, at the edge of Mount Carmel Cemetery, in New York City, 100 feet from traffic streaming by on the Jackie Robinson Parkway, lies Leo Max Frank.

Frank’s conviction in Atlanta in 1913 on charges of the rape and murder of a 13-year-old girl are well known. So, too, is the lynching of Frank, on August 17, 1915, after his death sentence was commuted to life in prison.

Less well known is the journey Frank’s body took after it was cut down from an oak tree in Marietta, Georgia, and transported to New York City, where, on August 20, 1915, as the Forverts reported, “softly in a soundless dawn his body was lowered in a wooden coffin, into the deep grave.”

It was to be a tumultuous journey. Frank’s corpse was displayed and celebrated like a trophy by the thousands who reveled in his murder. In New York City, thousands more turned out to mourn or to catch a glimpse of Frank’s casket, his bereaved parents or his widow.

Frank’s final hours alive began on August 16, when a group of armed men woke him up in the middle of the night. The men dragged Frank, who was wearing only a nightshirt, from his jail cell in Milledgeville, southeast of Atlanta, and bundled him into one of seven waiting cars.

As his car bumped along country roads, heading more than 100 miles northwest through the night, toward the town of Marietta, Frank’s captors gave him one final opportunity to admit raping and murdering Mary Phagan. Frank, who had professed his innocence for more than two years, remained silent, according to Steve Oney’s painstakingly researched book about the Frank case, “And the Dead Shall Rise.” 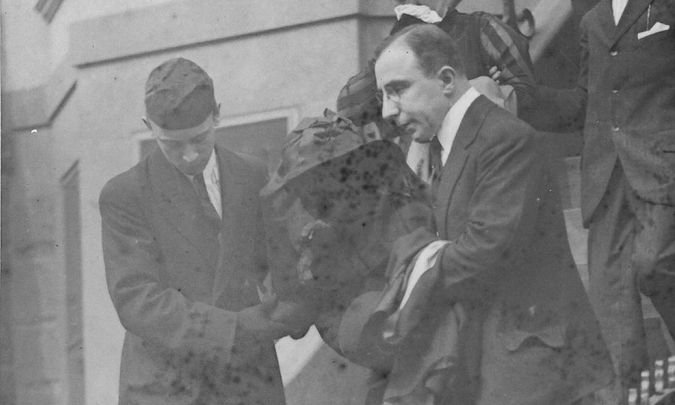 Lucille Frank, Leo Frank's widow, is led down the steps of the family's Brooklyn brownstone. Image by Forward Photo

Shortly after daybreak, the car stopped at the edge of a wood close to the homestead where Phagan had grown up. The men walked Frank to an oak tree, helped him onto a table and looped a noose around his neck.

At around 7 a.m., Frank was asked if he had any final words. “‘I think now more about my wife and mother than about my own life,” he is reported to have said before the table was kicked away and Frank, his arms and legs bound, swung in the air.

As the minutes and then the hours passed, thousands came from the surrounding towns and countryside. They cheered, and posed for photographs. They cut away pieces of the rope that bound Frank and ripped off swatches of his clothing.

A local judge, Newt Morris, waded into the crowd, imploring the men and women to allow Frank’s body to be taken away. The Forverts, which had covered Frank’s case relentlessly since 1913, reported that Morris begged, “Whatever sin the living Frank committed, he has a mother and father — have mercy on them.”

But no sooner had Frank been cut down than the mob swarmed the body. Among that mob was Robert E. Lee Howell who, according to the Atlanta Journal, stomped repeatedly with a “crunching sound” on Frank’s face. Later that day, at an undertaker’s in Atlanta, a doctor noted the well-defined markings of the sole of a shoe on Frank’s nose and close to his left eye.

Even in Atlanta, Frank’s body was not left in peace. As The New York Sun reported, crowds swarmed the undertaker’s garage threatening to break down the doors if they were not allowed to see Frank. The mob smashed a pane of glass, prompting the police to escort Frank’s body to the undertaker’s chapel, where, over the space of five hours, about 15,000 people filed in to view Frank’s body. 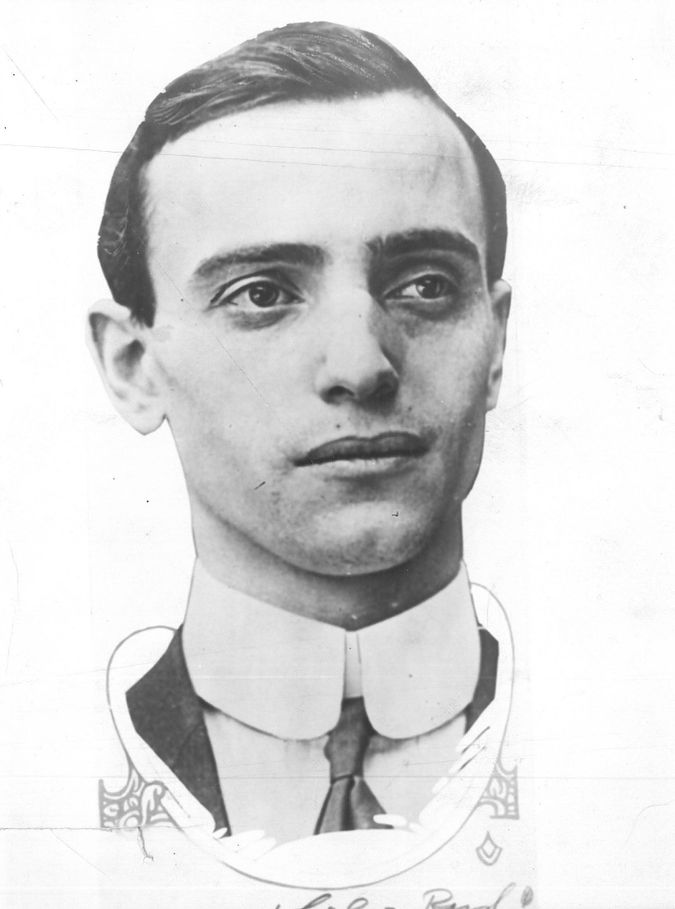 That evening, Frank’s casket was placed on a train and, along with his widow, Lucille Frank, a few of her relatives and Rabbi David Marx, spiritual leader of the Franks’ synagogue in Atlanta, The Temple, the party departed for New York City.

Over the days that followed, newspapers across the country reported Frank’s kidnapping and lynching. Early on, they noted that though it was well known that the lynch party was organized by civic leaders of Marietta and Cobb County, including lawyers, businesspeople and politicians, no one had been arrested. Indeed, many in Georgia supported the lynching. The mayor of Atlanta, J.G. Woodward, announced that “when it comes to woman’s honor there is no limit to which we will not go to avenge and to protect it.”

Much of the rest of the country was horrified. Former president William Howard Taft called the lynching “a damnable outrage.” The Jews of New York City, who had been so concerned about murderous anti-Semitism in the Old Country, were forced to confront a similar crime committed in their new home. On the Lower East Side, they gathered outside the offices of the Yiddish papers like the Forverts, according to Oney’s book, “while on street corners solitary mourners wept.”

It was into this atmosphere of shock and mourning that the train carrying Frank’s casket arrived in New York City at dawn on August 19.

Frank’s father, Rudolph Frank, and Frank’s sister and brother-in-law, Marian and Otto Stern, were on the platform at Penn Station to greet the train. According to Oney’s book, Lucille Frank broke down when she saw the trio, saying: “It’s over. It’s all over now.”

Frank’s casket was transferred to a hearse and, with his relatives following behind in taxicabs, a police motorcade led the group to Brooklyn through Manhattan. Frank’s body was taken to a mortuary, while the mourners continued to Frank’s parents’ home, a modest, three-story brownstone at 152 Underhill Avenue close to Prospect Park.

“Over at the Frank home the early morning sun had shown the face of an elderly woman pressed from time to time against an upper window, waiting for her son to come home,” the Sun reported. “She had been up all night.”

The report continued: “When the party which had journeyed from Atlanta arrived she hastened downstairs and ran out on the steps to meet her son’s widow and embrace her. Then the taxicabs were dismissed and after the last persons had passed inside the house the shades were drawn and from all outward appearances it might have been deserted.” 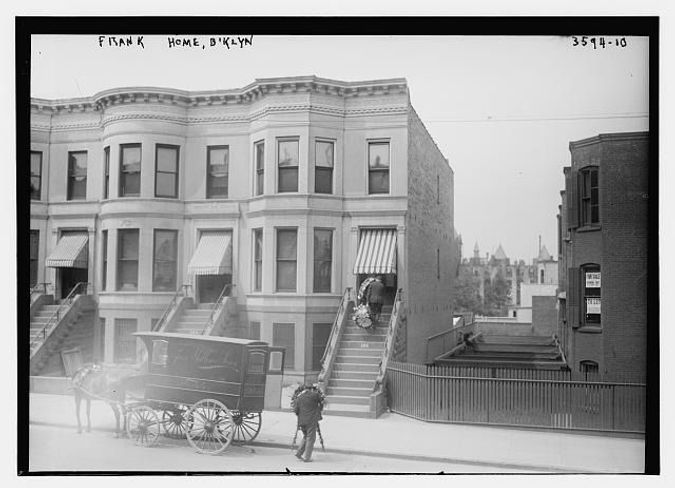 As word spread that Frank’s widow had returned, a crowd began to form outside the house, swelling to between 5,000 and 10,000 people. Frank’s mother, Ray Frank, invited some reporters into the parlor, where, as the Sun reported, she sat with Frank’s uncle Mr. Jacobs, “a mass of telegrams before her, which she handled nervously as she talked.”

Ray Frank proclaimed her son’s innocence as well as her trust that God would “deal in His own way with those who have done this thing.” She added: “We shall never forget these kind friends, both gentile and Jew, who have been with us in our sorrow.”

Reporters were still camped outside the Frank home when the undertaker arrived around midnight to deliver Frank’s body, now lying inside a new black coffin. The Forverts reported that as Frank’s parents, sister and widow waited at the top of the stoop for the coffin to be delivered, “in the dark of night, a choking sob could be heard coming from the doorway of the house.”

Frank’s coffin was brought inside, where, the Forverts continued, “the gas lamp flickered on the walls and his parents’ tears were laced with the pain of the bit of flesh and bones that remained of their unfortunate” son.

Frank was buried early the next morning, August 20. As Lucille Frank descended the steps of her in-laws’ home, shrouded in black, she stumbled. Two men standing nearby caught hold of her arms and helped her into one of the waiting carriages. It took about 20 minutes for the cortege of four carriages, plus the hearse, to wend its way 8 miles to Mount Carmel Cemetery, in Queens.

Mount Carmel was one of the most important Jewish cemeteries of its day.

The year after Frank’s funeral, it would become the final resting place of the Yiddish writer Sholem Aleichem. Twenty years after that, Mendel Beilis, who, like Frank, was a Jewish factory superintendent accused of murdering a Christian teen at a time of heightened anti-Semitism, was buried there. Fortunately for Beilis, he was acquitted in his hometown of Kiev, Ukraine, and died of natural causes in New York.

Carmel is also the burial place of Abraham Cahan, founding editor of the Forverts. Cahan took Frank’s case personally, throwing all the Forverts’s resources into covering his trial and imprisonment, and even visiting him in jail in 1914. His newspaper treated the aftermath of Frank’s lynching just as personally.

Frank’s family requested that the funeral be a private, family affair. According to the Forverts, there were just 18 mourners at the service, where Rabbi Alexander Lyons of Congregation Beth Elohim, in Brooklyn, said a prayer in English and Marx of Atlanta said a prayer in Hebrew.

As Frank’s coffin was lowered into the grave, the Forverts reported that “a distressful sob tore out of his mother’s heart [and] a distraught cry could be heard from the young widow and she fainted on her husband’s grave.

“Those close by her revived the widow and the coffin sank deeper and deeper, the metal spades swiftly at work, fresh earth thrown on the deceased, and in no time a small hill grows — a little mound covering up and finalizing the last scene of a historic tragedy.”