Barack Obama Reaches Out to Jewish ‘Family’ on Iran and Israel 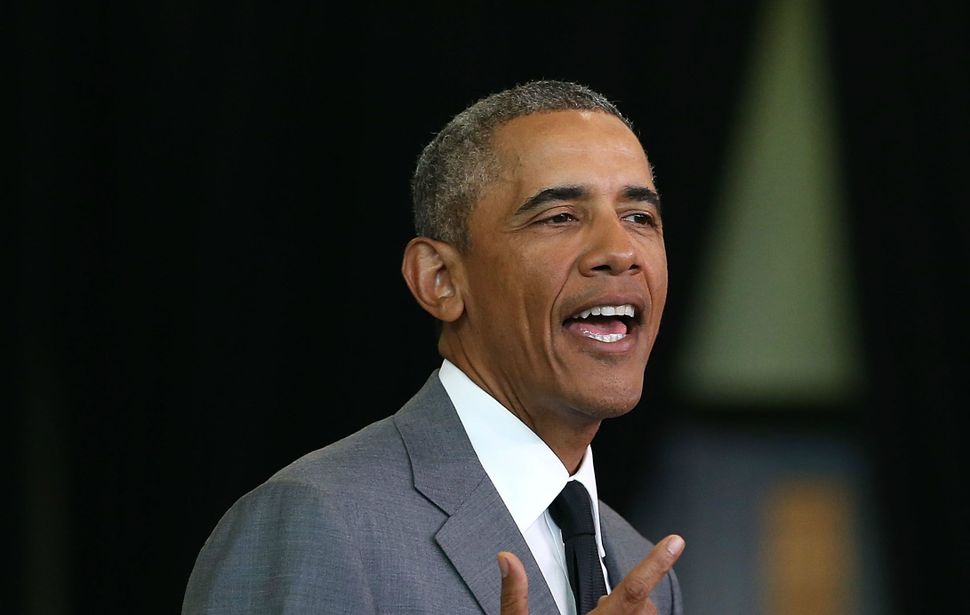 President Obama sought to reach out to Jews as “family” Friday as he made a dramatic new appeal for support of the nuclear deal with Iran — and vowed to repair the damaged relationship with Israel.

In an hour-long webcast address sponsored by the Jewish Federations of North America and the Conference of Presidents of Major American Jewish Organizations, Obama went beyond his previous talking points on the Iranian nuclear deal, stressing his view that disputes over the agreement, which will be brought to a vote in Congress next month, are no more than disagreements within the family.

“Like all families, sometimes there are going to be disagreements,” Obama said. “And sometimes people get angrier about disagreements in families than with folks that aren’t family.”

The president’s framing of the Iran debate, less feisty and more conciliatory than in previous speeches and statements, could suggest that Obama, now confident of his victory in the upcoming votes, is looking for ways to mend fences with supporters of Israel once the political ordeal is over. Obama expressed confidence that his Jewish supporters and friends, without whom, he said, “I wouldn’t be sitting here,” will remain close despite differences some have about the deal and will keep on meeting with him for rounds of golf and around the White House Passover seder table.

But Obama, while decrying the negative tone taken by both supporters and opponents of the deal, made clear he did not believe the blame rests equally on both sides. He took issue with harsh language, which Obama described as “appalling,” hurled at New York Jewish congressman Jerry Nadler following his decision to vote in favor of the Iran deal. “I would suggest that in terms of the tone of this debate, everybody keep in mind that we’re all pro-Israel,” Obama said.

The president also reached out to Israel and its leader Netanyahu, expressing his sympathy to the concerns of Israelis about the deal, while arguing that despite the understandable reluctance to negotiating with a country that supports terror groups attacking Israel and that has denied the Holocaust, cold calculations should lead them to support the deal.

Obama opened with a short presentation, laying out the main features of the Iran deal, followed by a lengthy questions-and-answers session conducted by the top lay leaders of the two host organizations. Addressing concerns of Jewish Americans about the future of the relations between the United States and Israel. The President argued that the bond between the two countries “isn’t political,” nor is it an “alliance of convenience,” but rather a historic bond that rests on generations of family ties, friendships and shared values.

Still, Obama rejected the notion that this close relationship means never speaking out about issues that are in dispute, saying that the idea of “no daylight” between the two counties “could be dangerous” for both nations.

Obama had little to offer in terms of the specifics of the nuclear plan, which had already been debated at length within the Jewish community. He repeated his assurance that the agreement blocks all pathways to a nuclear bomb, that sanctions can “snap back” if Iran does not live up to its end of the deal, and that even after strict limitations on Iran’s nuclear program are lifted after 15 years, America and its allies will still be better positioned to deny Iran a nuclear program than they are today.

The President did, however, direct some of his comments to Israeli and to American Jews involved in pro-Israel activity.

But keeping in mind the concerns raised by Netanyahu and by many Jewish Americans opposing the deal, Obama promised that the United States will continue to go after Iran’s support for Hezbollah and will counter its efforts to destabilize neighboring countries. He also tried to strike a positive tone, after months of public discord with Netanyahu, by assuring his viewers that once the dust settles, relations with Netanyahu can be restored in a “pretty quick” fashion. At that point, the U.S. will also be poised to offer Israel measures that will enhance its security.

Political analysts agree that the effort to block the deal, led by Congressional Republicans and Israel’s Netanyahu along with most of the major Jewish organizations, is doomed to fail.

Supporters of the agreement are already close to ensuring the Senate sustains a presidential veto on any measure to disapprove the deal and are now working to get the 40 senators needed to allow for a Democratic filibuster which will stop the legislation before even reaching a vote. House leaders are also confident they have more than a third of the votes in the bag.

Barack Obama Reaches Out to Jewish ‘Family’ on Iran and Israel