It’s Jew vs. Jew (Plus 5) in Race for Maryland Congressional Seat 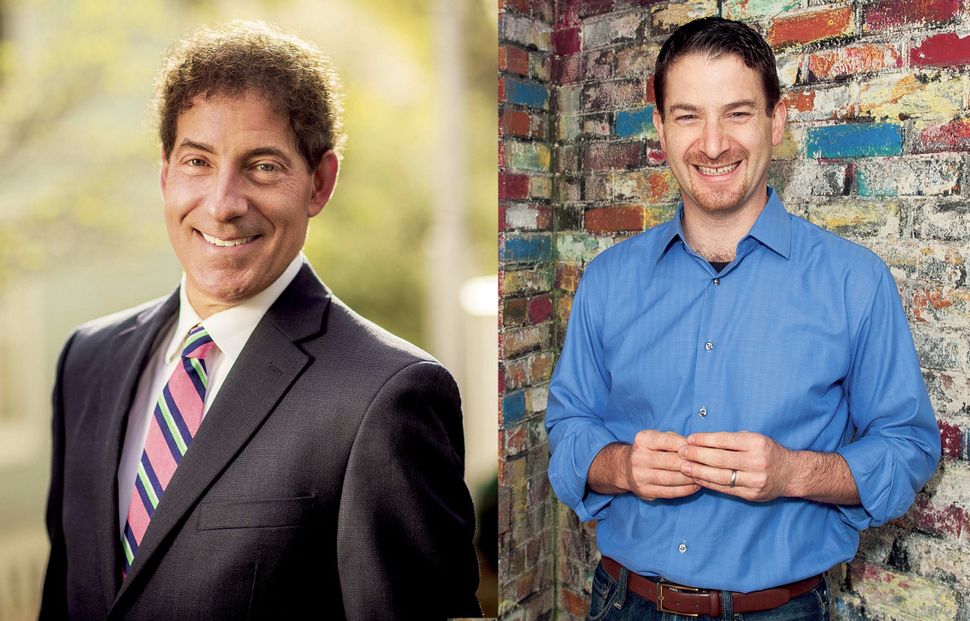 Two prominent progressive Jews are among the seven candidates joining the fray to win one of the rarest prizes available in Congress these days: an open seat in which the incumbent has chosen not to run.

Both Jamie Raskin, a Maryland state senator, and Joel Rubin, a former Obama administration official, boast deep Jewish roots and a strong commitment to a classically liberal agenda that broadly reflects the constituency they seek to represent. But in their bid for Maryland’s 8th Congressional District seat, Raskin and Rubin face not just each other, but also five other hopefuls, including the spouse of MSNBC’s “Hardball” host, Chris Matthews.

It’s a race that is drawing a lot of attention; among other things, it’s generally accepted that whoever wins the April Democratic primary will win the congressional seat itself in the Washington suburban district. The real battle will be one over the candidates’ liberal credentials and commitments.

“It’s hard to be too progressive on the Democratic side,” said David Lublin, a professor at the American University’s School of Public Affairs and an expert on local Maryland politics, about this district.

Raskin has been active in local politics for years, and has raised more money than other candidates, while Rubin is fresh in the race, seeking his first term as an elected official. The race is still wide open. But Lublin said that Raskin and Kathleen Matthews, a former local TV anchor who is married to the MSNBC political talk show host, are currently viewed as front-runners by virtue of their fundraising and visibility.

Maryland’s 8th District, which includes primarily Montgomery County and parts of Carroll and Frederick counties, has an estimated Jewish population of more than 75,000, about 10% of the electorate.

Rubin announced his candidacy October 5, joining an already crowded Democratic field. He stepped down several months ago from a top State Department position as deputy assistant secretary of state in charge of relations with the House of Representatives.

A former aide to the late Jewish New Jersey senator Frank Lautenberg, Rubin, 44, was among the founders of J Street and has since devoted much of his career to promoting a diplomatic solution to the Iranian nuclear crisis. “My work in the Obama administration was a culmination of seven years of experience ensuring the American public and the Jewish community are open to the idea of a diplomatic agreement with Iran,” he said in an October 6 interview.

Although the controversy over the nuclear deal with Iran split the Jewish community deeply, Rubin believes it is a “winning issue” for his campaign, one that will resonate well among voters in a district that is home to many federal government employees and civil servants who follow national issues closely.

Rubin, who grew up in what he describes as a “deeply Zionist family” in Pittsburgh, has crossed off many of the items on the American Jewish checklist, from Hebrew school, to years at Camp Ramah, Brandeis University and Hillel, to numerous trips to Israel. On his computer, he keeps a photo of his great-grandfather, alongside his grandmother, meeting with David Ben-Gurion, Israel’s first prime minister. “Everyone who knows me,” Rubin said, “knows that it is impossible to separate who I am from my Jewish heritage.”

Rubin is a member of the Reform synagogue Temple Sinai, just like Raskin, who entered the congressional race early on, shortly after incumbent Chris Van Hollen announced his plans to leave the House to run for the U.S. Senate seat opening up with the upcoming retirement of Senator Barbara Mikulski.

Raskin, 52, a law professor, comes from a bloodline of Jewish politicians. His maternal grandfather, Samuel Bellman, was the first Jew elected to the Minnesota state legislature, in 1935. Raskin grew up hearing his grandfather’s stories about the anti-Semitism he faced, being disinvited to caucus events that were held in hotels from which Jews were excluded. “In some sense, I modeled my career in public life after him, because he always put the needs of the people first,” Raskin told the Forward.

His progressive roots stem from his father, Marcus Raskin, who was an aide to President Kennedy and co-founder of the left-leaning Institute for Policy Studies. Other family members were active in Wisconsin Democratic politics and in labor unions.

A resident of Takoma Park, a suburb fondly referred to as the “People’s Republic of Takoma Park” for its liberal, post-hippie population, Raskin is focusing much of his message on environmental issues, vowing to promote a “green deal” in Congress that will lead America to make major investments in renewable energy. “Ours is the party of the liberal civilizing movement and we have to keep that direction of progressive change going,” he said.

Raskin supported the nuclear deal with Iran, calling it “imperfect” but saying it could dramatically reduce the threat posed by Iran. When asked in 2010 if he would support legislation that would divest state funds from Israel, Raskin said he was “totally opposed” to such moves, noting that while he had been involved in protests against South Africa in order to end the apartheid regime, he believes Israel’s situation is “completely different.”

More than in other congressional districts, money will play a major factor in this Maryland race. TV airtime in the metropolitan Washington area is among the most expensive in the nation, and experts estimate that a successful race will require anywhere between $1 million and $4 million. Raskin, as a state senator, already has a ground operation ready to mobilize, as well as access to heavy donors. But with Raskin’s and other candidates’ name recognition still low, Rubin believes he can find his way into the crowded pack and use his federal-level credentials to stand out.

It’s Jew vs. Jew (Plus 5) in Race for Maryland Congressional Seat