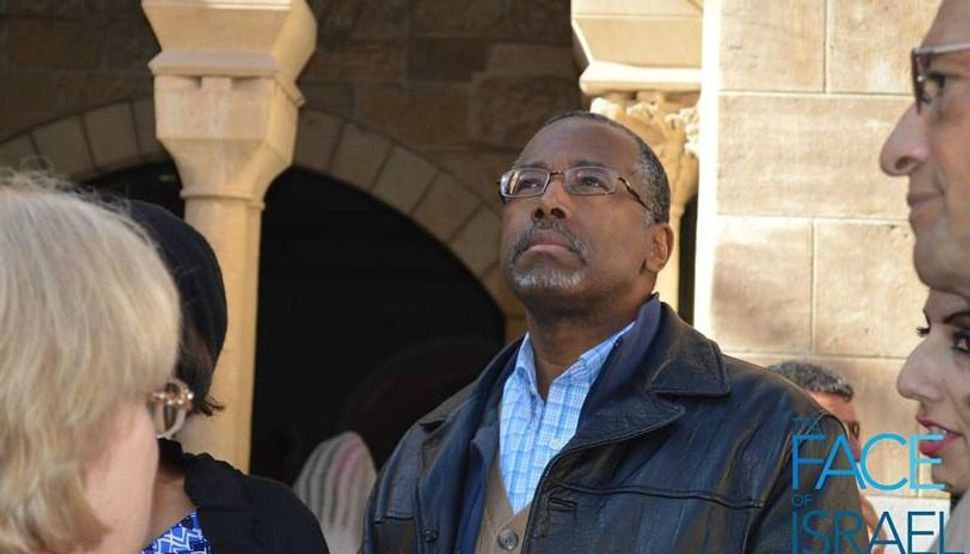 Image by Face of Israel

Republican presidential candidate Ben Carson visited Israel on a tour organized by a for-profit company that has since ceased most of its activity.

Ted Cruz took the trip on the dime of a hawkish advocacy group with neoconservative ties. Rand Paul had an anti-gay Christian group pay his way to Jerusalem.

No matter how they make the trip, presidential candidates have long understood that a pilgrimage to Israel is a must on their way to the Iowa caucuses, the New Hampshire primaries and, hopefully, their party’s nominating conventions. And most have no difficulty finding sponsors of their liking to pick up the tab and show them the Jewish state through their own prism.

For Republicans, a strong show of support and a set of photos with Israeli leaders and overlooking the country’s borders can also help open the door to major Jewish donors. Among their targets are Sheldon Adelson, who has yet to announce his choice in the crowded GOP primary race, and Paul Singer, who recently threw his support behind the Florida senator Marco Rubio. 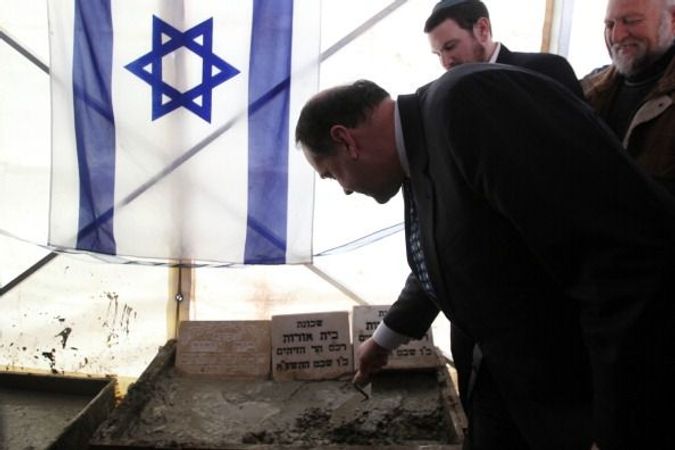 Many of these trips are paid for and organized by the American Israel Education Foundation, a sister organization of the American Israel Public Affairs Committee, the largest pro-Israel lobby in America. Just like Birthright Israel, which provides college students with a free trip to Israel to bolster their Jewish and pro-Israel identity, politicians have their own trips, with a much more impressive lineup of Israeli officials greeting them, and markedly better room and board. These trips pay dividends to both sides: Israel wins more understanding from America’s future leaders, and the visitors get to burnish their pro-Israel credentials.

“Just about everybody makes a visit to Israel; it’s a must,” said Laura Kam, president of a strategic consulting firm based in Jerusalem. “It plays to most Americans who are pro-Israel and to Jewish voters who punch above their weight in terms of voting and donations.”

Ben Carson, a latecomer to politics, ventured on his first trip to Israel last December. An outsider to politics who spent his professional life in an operating theater, Carson, a pediatric neurosurgeon, was not exposed to the sort of pro-Israel, Jewish and evangelical organizations that most commonly engage politicians early on in their careers and offer to take them to Israel. Alongside AIEF, which is the largest in the business, local Jewish federations and their affiliated community relations councils, national organizations and politically oriented Jewish groups sponsor trips to Israel.

Carson, who began to show interest in politics last year, skipped this process of early engagement with American Jewish groups. He took his December 2014 visit with The Face of Israel, a relatively unknown Israel-based organization. Unlike most groups taking American politicians to Israel, The Face of Israel is organized as a limited liability for-profit company, not as a not-for-profit organization.

The story of Carson’s visit to Israel is told through photos posted on The Face of Israel’s Facebook page: There, he is in one picture wearing a white yarmulke while visiting the Western Wall; in another, signing the Yad Vashem visitors’ book, and in a third, flying over Israel in a helicopter tour guided by a retired Israeli army general — a staple of every high-profile first visit to Israel ever since former president George W. Bush described how his helicopter tour with Ariel Sharon helped shape his views on Israel. But Carson was also taken to Neve Daniel, an exclusively Jewish settlement in the Gush Etzion bloc in the occupied West Bank. As a symbolic show of support for the West Bank settlements, which the international community views as illegal, it was a stop that set apart his trip from many visits organized by other groups.

The Face of Israel describes its mission as promoting Israel by reaching out to world public opinion leaders. Carson is the only American politician invited by the group. Other guests included a group of beauty pageant winners from across the United States, and European young political leaders. “We’re a Zionist organization and we explain why Israel is right,” said Amit Barak, who heads the group’s Israel operations. The organization’s unusual setup as a private for-profit company allows it to avoid many disclosures that not-for-profit organizations are obliged to follow. According to public records in Israel, the company’s shares are divided equally between Howard Weisband, an American-Israeli who had served in executive positions in Jewish federations and organizations, and Haim Aharon, an Israeli lawyer and former ambassador who has chaired the Jewish Agency for Israel’s immigration department.

But the organization, which was founded in 2010, is now barely active. According to Barak, the group laid off most of its staff, and the two part-time employees still remaining work solely on maintaining ties with foreign opinion leaders that had previously visited Israel through their program. “The company is undergoing cuts,” he said. “We are working on a very limited basis right now.”

As in so many other ways, Donald Trump, the other Republican outsider, demonstrated his willingness to break with political convention when it comes to visiting Israel. The Donald has made strong statements of support for Israel and has even released a video endorsing Benjamin Netanyahu in the 2013 elections. But he has skipped the mandatory visit to the Jewish state altogether.

Carly Fiorina made her debut trip to Israel shortly after she entered politics in 2010, when running for a U.S. Senate seat from California. Her trip, which her campaign described at the time as “private,” was organized and funded by the nor-for-profit Republican Jewish Coalition. A so-called 501(c)(4) organization under the IRS code, the coalition is exempt from taxes, but contributions to the group are not tax deductible for donors. 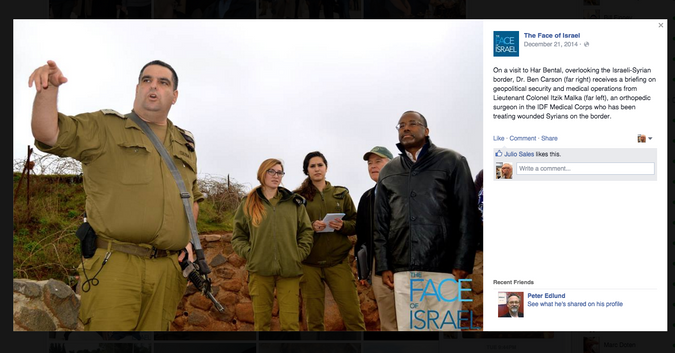 First Look: GOP presidential candidate Ben Carson tours the Golan in March during his first visit to Israel, sponsored by a for-profit group. Image by Facebook/ Face of Israel

Senator Rand Paul, a Kentucky libertarian, visited Israel in 2013 on a trip sponsored by the American Family Association, a group denounced by the Anti-Defamation League for its anti-gay and anti-Mormon rhetoric. Nevertheless, its status as a public charity exempts it from taxes and enables contributors to claim donations as tax deductions. Helping to fund the trip was New Jersey millionaire Richard “Kasriel” Roberts, who is among the top Orthodox Jewish donors to Republican candidates.

Ted Cruz, the Texas senator who often expresses strong views on Israel in Senate Foreign Relations Committee hearings, chose to visit the country last year on a trip funded by a group called Secure America Now. The conservative advocacy organization’s president and founder is Allen Roth, a longtime senior political aide to billionaire cosmetics heir and major Republican donor Ronald Lauder. In 2012, Lauder, who was a top supporter of Netanyahu before being eclipsed by Adelson, underwrote an effort to turn out American voters living in Israel, while a number of Republicans, including presidential nominee Mitt Romney, were casting doubt on Obama’s support for the Jewish state.

On its most recent publicly available tax return, Secure America Now describes its purpose as educating Americans about the security threats posed by Iran’s nuclear program and by “radical Islam.”

Whatever the priorities and connections of the groups that send them, almost all candidates share a similar agenda when visiting Israel: a mix of security-minded tours along the borders, some Yiddishkeit, or displays of empathy with Jewish religion and culture, and the mandatory photo opportunity at the Israeli prime minister’s office.

“They need to meet with the PM and get the photo-op to have themselves be seen as world leaders,” Kam told the Forward. “The Kotel visit is to pull at the heartstrings of the Jewish community. It shows a high level of support for the Jewish People in general.”

In that sense, former Arkansas governor Mike Huckabee stands out from the pack. Huckabee made his first of many visits to Israel 42 years ago, and has gone back numerous times as a politician, a religious leader and a talk radio host. Many of these trips were tours organized and led by Huckabee for Americans interested in Israel’s Christian religious sites.

Democratic presidential candidates have also made their visits to Israel, though some under different circumstances. Hillary Clinton, who is leading in the polls, visited Israel several times as first lady and later as a U.S. senator from New York. As secretary of state from 2009 to 2013 she frequently shuttled back and forth between Washington and Tel Aviv.

Bernie Sanders, the self-declared socialist candidate in the Democratic primary race, has visited Israel several times as a politically independent U.S. senator from Vermont. Sanders, who caucused with the Democrats, though until recently he was formally unaffiliated with either party, is the only politician who claims to have actually lived in Israel for several months. Sanders states that he worked in the 1960s as a volunteer on a kibbutz, though he now cannot recall its name. Efforts by several reporters have so far failed to discover which one.

Although some of the candidates on both sides have visited Israel on trips sponsored by smaller groups, most American politicians took their first trip to the country on a visit organized by AIEF. The group flies members of Congress on an educational visit to Israel regularly, at times on bipartisan delegations and at times in separate groups. Alongside members of Congress, AIEF sponsors visits for state legislators, student leaders and journalists.

According to the House of Representative’s Clerk’s Office, 120 members have reported going on trips to Israel this year. Of them, 104 went on AIEF-funded tours and five on trips sponsored by J Street Education Fund, an arm of the dovish pro-Israel lobby.

Congressional rules require the ethics committee’s approval prior to the trip and allow travel sponsored by not-for-profit organizations only, not by lobbyists.

“There is going to be an inherent advantage to countries — or groups that represent the interests of these countries — that can afford to fund these trips,” said Noah Bookbinder, executive director of Citizens for Responsibility and Ethics in Washington, a group working to increase accountability and limit the influence of money in government operations. “This doesn’t make these trips invalid, but it reflects a potential conflict.”