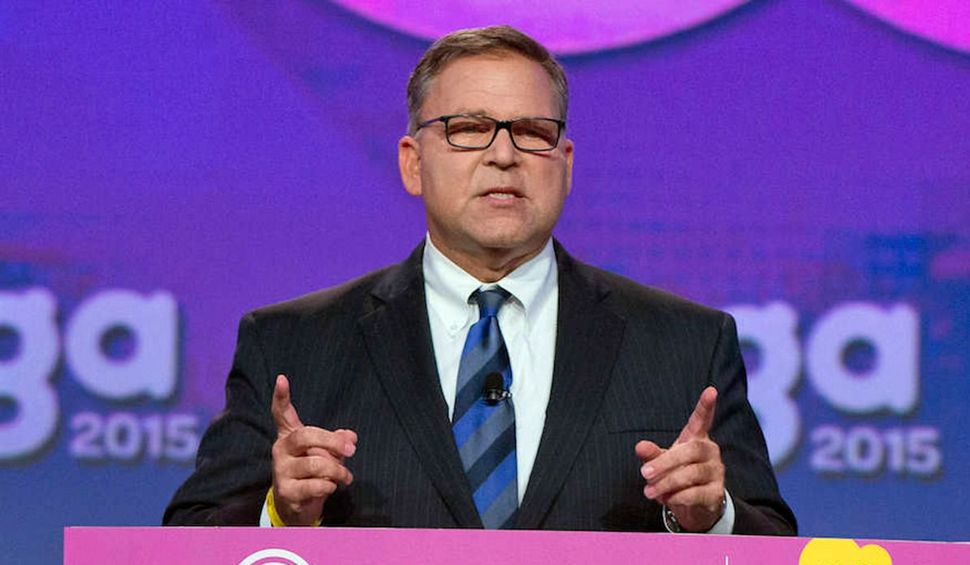 Within the past few years, a new top leader also took the helm at the Reform movement’s Religious Action Center. The American Jewish Joint Distribution Committee is actively searching for a new CEO and the American Jewish World Service is in the process of bidding farewell to Ruth Messinger, its long-serving top executive.

A sweeping generational change is surging through the top tiers of the Jewish communal world. And at the recent General Assembly of The Jewish Federations of North America, a huge yearly gathering of communal lay and professional leaders, the challenge of filling their ranks was high on the agenda.

Gali Cooks, executive director of Jewish Leadership Pipelines Alliance, a collaboration of Jewish foundations and organizations set up to support recruitment and development of leaders for Jewish not-for-profit groups, called it the “leadership gap.” It stems, she said, from the overall shift in career patterns from the baby-boom generation to younger Generation X rising leaders, and has affected the entire American organizational environment. Professionals no longer feel committed to one workplace, and job stability is no longer a driving factor when making career choices.

“The other problem,” she added, “is that we did not do enough to develop new leaders.”

According to a March 2014 report compiled by the group, 75%–90% of Jewish not-for-profit organizations will need to find new executive directors in the next five to seven years. The report estimates that in recent years, at least 50 Jewish organizations yearly have experienced a leadership change.

Filling these many vacant top spots, the report found, is becoming increasingly difficult.

Across the Jewish world, generational

transitions are already taking place on the ground. Fifty-four percent of federation executives have less than five years’ experience.

At the annual G.A. of the federations, which took place in Washington from November 8 to November 10, the programming reflected the challenge of recruiting and engaging this new and very different generation. Aspiring communal leaders were courted and pampered with a series of talks, sessions and one-on-one discussions aimed at making sure talented Jewish professionals see a future in communal institutions. With titles such as “Developing High Performance Leaders,” gatherings devoted to examining “characteristics of high-performance teams” and private federation career conversations, the federation network extended its hand to a population of upwardly mobile professionals once taken for granted.

“Jewish organizations are starting to acknowledge that the future of the community really lies in the understanding that people are the biggest asset,” Cooks said.

“There are different initiatives that are moving us forward, but I’ll never believe that we’re doing enough,” said JFNA’s president and CEO, Jerry Silverman. He noted that the federations’ umbrella organization is looking to develop new executives from inside the organization and to “ensure in a competitive sense that the Jewish industry is a great place to work for young people.”

Silverman first set off alarm bells about the leadership shortage during a 2011 speech in which he warned that an older cohort of leaders is phasing out and not enough young people are stepping up. “We have to make sure we have a plethora of Jewish leaders coming up,” he said at the time. “Smart, passionate Jewish leaders; it’s all about the ‘A’ players we put at the table.”

At the same gathering, Susan Libitzky, a federation activist and onetime federation professional from San Francisco, told the Forward: “We can’t get anyone to work for federation. The pay is too low. And so is the prestige.”

At the G.A., communal officials stressed that one way of reversing this trend was to make sure federations are attractive workplaces. A survey carried out by the Mandel Leadership Institute and presented to participants at a November 8 session found that federation employees are looking for a workplace that has a strong sense of mission and that gives them a sense of involvement and opportunities to develop. Monetary compensation ranked low on the list of priorities, as did other workplace perks.

This, said Mimi Kravetz, chief talent officer at Hillel International, fits her own experience as a human resources executive at Google. What attracted workers to the tech giant, she explained, weren’t its famous slides and scooters for grown-ups, or the free-food stands. It was its sense of contribution to the company and the openness of the top leaders that made Google a desirable workplace.

Federations and Jewish organizations were never considered fun workplaces to start with. Now they face the challenge of keeping top talent onboard while keeping in mind that the previous generation’s employment model of career-long service is no longer viable. Nowadays, workers expect to move through several careers during their professional lives.

Jewish Leadership Pipelines Alliance, which is now changing its name to Leading Edge, recently launched a program to provide new CEOs with mentoring, peer networking and coaching in their first year in office. “Most CEOs have 18 months before they are deemed a success or a failure,” Cooks said. “We know that this transition time can be magical, and we want to help.”

Other programs aim to engage donors and lay leaders to help fill the leadership gap and to improve groups’ organizational cultures, thereby making them more attractive.

UJA-Federation of New York is launching its own innovative program under the auspices of the Ruskay Institute for Jewish Professional Leadership. The program, carrying the name of the federation’s previous executive, has chosen 24 younger professionals, with four to nine years of experience, for intense training on the changing culture of the Jewish community and the way new leaders can address this new reality. “We recognize that there is a lot of wisdom in Jewish tradition, but we also understand that we need to think afresh,” said Alisa Rubin Kurshan, UJA’s executive vice president of community planning and agency resources.

Attracting new leaders for Jewish groups, several professionals involved in the process said, can be harder than in the general not-for-profit sector. Salaries, while competitive in major groups, are at times lower than in similar non-Jewish small organizations, and advancement opportunities are viewed as being more limited.

But there are also unique factors that help attract young leaders to the Jewish world. Birthright Israel, Kurshan said, is one of them. She noted that the free 10-day trip to Israel comes up time and again in job interviews as a formative program that led participants to seek a career in the Jewish world. “I’ve met so many extremely talented people with diverse stories who are all passionate about serving the Jewish community,” she said.

And if all programs aimed at attracting new blood to Jewish leadership positions fail, there is always the time-tested Jewish way of getting people through the door. “Baked goods,” said Scott Kaufman, CEO of the Jewish Federation of Metropolitan Detroit. “This is the one thing you have to share if you want people to come. Baked goods. You gain 15 pounds in your first six months at a Jewish federation.”