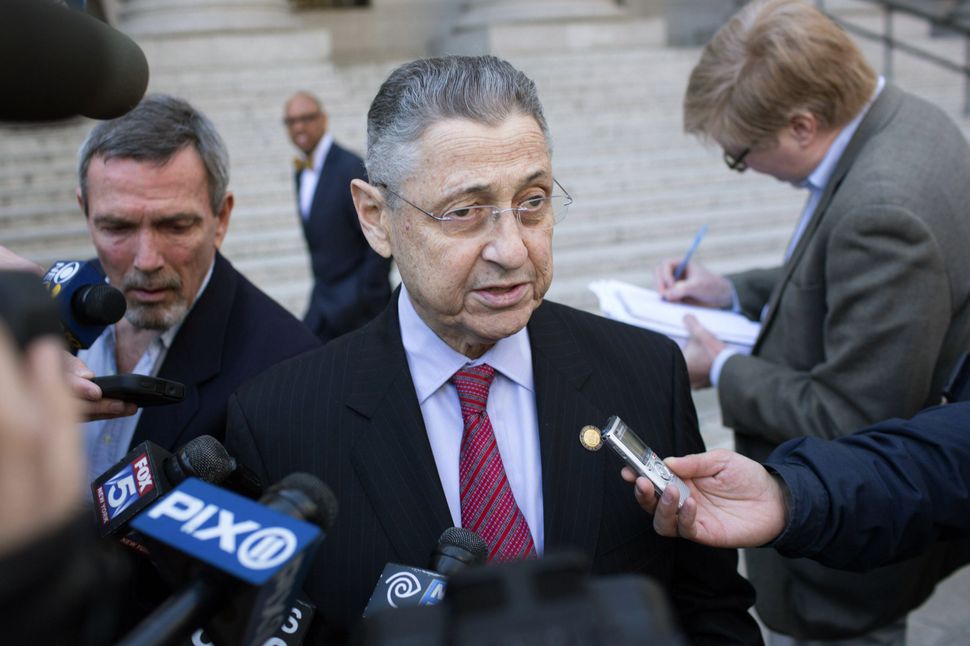 Sheldon Silver stepped into the path of an impatient bicyclist on the way out of the Thurgood Marshall United States Courthouse in lower Manhattan at the end of the first week of his criminal trial.

In court that day, Silver had heard an email read out calling him “the most powerful man in New York State.” But the former speaker of the New York State Assembly looked old and tired as he approached the photographers and reporters waiting for him at the bottom of the courthouse’s wide granite steps.

Throughout the long morning and afternoon in the small fourth-floor courtroom, Silver had seemed detached, as though this, the fourth day of the trial, was just another dull Assembly hearing, like countless others he had sat through during his nearly 40 years in Albany.

Entering at the start of the day, the graying pol put on a glad-handing show, joking with the courtroom artists and mouthing “Good morning” at the press section. During an afternoon break, he grinned at the small crowd as he walked toward the elevator. Yet when his attorneys approached the bench to consult privately with the judge and the prosecutors, leaving Silver at the defense table, he stood by himself in his pinstripe suit, looking very much alone.

At the day’s end, as Silver reached the foot of the courthouse steps, his attorney, Joel Cohen, hastened him across the sidewalk. Yet Silver couldn’t resist the microphones, and he appeared to be half-responding to questions tossed at him by the gaggle of photographers and reporters following him off the curb and onto the bike lane. There, the whole herd paused. A biker, riding north on the damp pavement, stopped short, blocked by the crowd, and yelled politely. So the photographers and reporters followed Cohen onto the road that circles Foley Square, where they paused again. Then the traffic light changed and the cars started coming, and the whole crew scrambled.

It was a less-than-dignified exit for the man whose voice, until this past January, was the only one that mattered in the New York State Assembly. Silver built a mighty political machine with a small clique of Orthodox Jewish men and women from the Lower East Side, political operators who learned to maneuver at the intersection of government and the not-for-profit sector, driving millions to Jewish organizations and molding the city around them.

Silver’s fraud trial, which began on November 2 and could stretch until mid-December, may undo all that. William Rapfogel, Silver’s lifelong friend and political ally, already sits in an upstate prison after pleading guilty last year to stealing more than $1 million from the Metropolitan Council on Jewish Poverty, a charity he ran that benefited heavily from state and city funds. A conviction could end Silver’s tenure in the Assembly, send him to prison and finally erode the massive power that accrued to the Grand Street crowd.

Testimony from an Assembly staff member named Victor E. Franco Jr., a prosecution witness, made clear the extent of the power that Silver had once wielded. Over and over again, as prosecutor Howard Master asked who controlled various massive pools of state money and who ultimately decided how they were distributed, the answer was the same: Sheldon Silver.

“The speaker was the ultimate decision maker,” Franco said of how an $8 million pool of funds designated for health care not-for-profits and hospitals was distributed, one of many such pools under Silver’s control. Not only were no grant applications required, neither were status reports.

“Typically, we never followed up on stuff like that,” Franco said.

In other words, when Silver decided he wanted some health care organization to receive some amount of money — in the case described in the trial, a total of half a million dollars — the group got it, no questions asked. The public wasn’t informed of who had received the money, or of who had decided how the money should be spent.

Sitting in the courtroom, you would hardly have known that the foundations of a political apparatus that had dominated an entire state were crumbling. For much of the day, the back-and-forth between the witness and the attorneys was over the nature of a friendship between two old Jews.

“He would sometimes give you a small gift, like handmade matzo?” asked Steven Molo, Silver’s lawyer, during the cross-examination of Robert Taub, 79, a key prosecution witness. Taub, a doctor, made referrals of patients suffering from mesothelioma to Silver; Silver drove the half-million in state health care described by Franco to a mesothelioma research center that Taub ran at Columbia University. Silver also helped Taub’s son get a job at a Jewish charity called Ohel.

Taub’s testimony began on the trial’s third day and stretched through much of the fourth. Dressed in a double-breasted suit and a bowtie, with a ring of graying hair around his bald pate, Taub looked like a caricature of a distinguished old professor. Ben Stein could play him in the movie. Taub sighed deeply during breaks in the questioning. He was there, largely, because of a mistake he made in August 2014, when two federal investigators came to his door at 6 a.m.

“I was terrified,” Taub told Molo of that encounter during the cross-examination.

Taub said that he spoke with the investigators in his living room while wearing his pajamas and his underwear. “I wanted it to be gone as quickly as possible,” he said.

Taub lied to the investigators, saying he had never referred any patients to Silver. Later, realizing that he had potentially committed a felony by lying, Taub reached out to prosecutors through an attorney to make a deal.

In his cross-examination of Taub, Molo seemed intent on suggesting to the jury that whatever benefits passed between the doctor and Silver were favors among friends, not quid-pro-quo swaps. To make the point, Molo attempted to establish that the men were friends. So Molo asked if Silver and Taub’s families had stayed at the same hotel over Passover one year (they had), and whether Taub had invited Silver to his daughter’s sheva brachot after her wedding (he had). Molo asked about Silver’s visits to Taub’s office at the Columbia University Medical Center and whether Taub and Silver would chat and have a cup of coffee.

Later, prosecutors asked their own questions about Silver and Taub’s relationship: Had Taub visited Silver’s house? No. Had they shared a meal? No. Had they watched sports together? No. “How many people would celebrate Passover at that same hotel?” asked the prosecutor, Andrew Goldstein.

That the fate of Silver, who could once fling a half-million dollars in state money in whichever direction he wanted, is being decided, in part, based on the nature of his friendship with an elderly doctor seemed incongruous. Among other things, it contrasted with the grandeur of the trial’s opening day, when the hearings debuted in the large ceremonial courtroom on the first floor of the court building packed with spectators. Now, there was instead the day-to-day picking away at the carapace of power around Silver, a far more mundane task.

The vast marble hallways of the Thurgood Marshall building were empty; there was no buzz, just silence. The smaller courtroom assigned to Judge Valerie E. Caproni had only two rows of seating open to members of the public and the press. The crowd was mostly reporters, lawyers and oddballs. No friends or family of Silver appeared to be present. Roughly 60 people sat in the courtroom itself, including the lawyers and the members of the jury; another handful watched over a video connection in a quiet overflow room next door. During a break in the trial in the morning, a few eager members of the public hung around the door, hoping to glance inside.

When the trial adjourned for the day, a black-hatted rabbi approached Silver and shook his hand. Asked later what he had told the former speaker, the rabbi, who identified himself only as Rabbi Gluck, said he had told him about a rabbi in Safed, the Israeli city known for its mystics, who could perform miracles in situations like Silver’s.