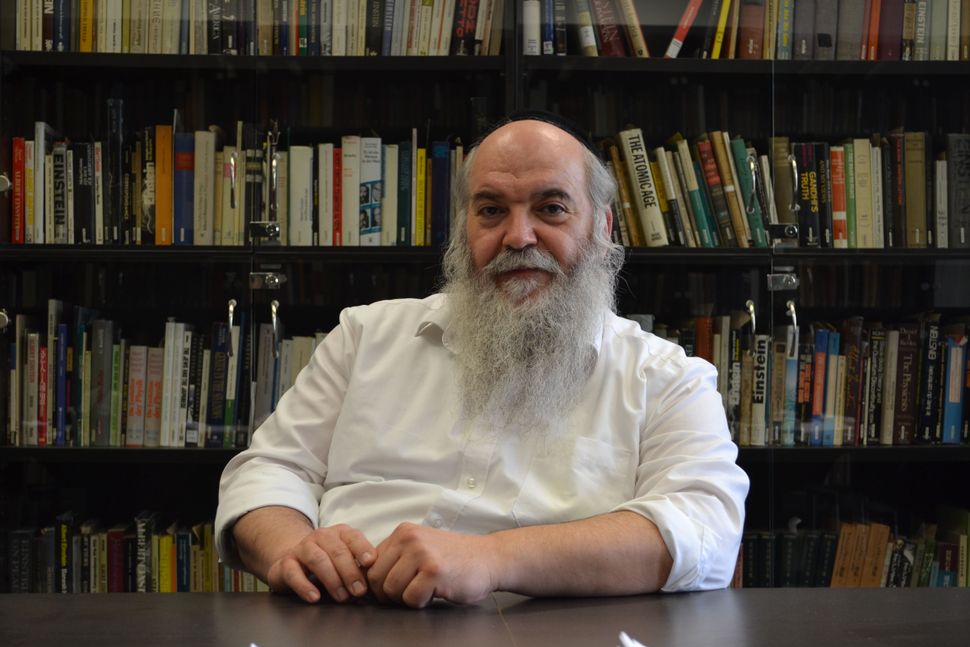 When Albert Einstein visited British Mandate Palestine in 1921, he was impressed by Jewish enterprise in construction and agriculture. But he had harsh words for ultra-Orthodox Jews he spotted praying at the Western Wall, calling them “dull-witted clansmen of our tribe.”

Sixty years after Einstein’s death, the German physicist could have never predicted that an ultra-Orthodox Israeli would be the gatekeeper of his written legacy.

Roni Grosz is the curator of The Albert Einstein Archives, at The Hebrew University of Jerusalem. A 52-year-old father of seven, he sports a white dress shirt, a long gray beard and a black-velvet skullcap. But Grosz has an unorthodox background for the Orthodox world. Originally from Vienna with a doctorate in literature and communications, he is fluent in French, Yiddish, Hebrew, German and English. He is well aware of how others perceive him as Einstein’s emissary.

“Here I am, an Orthodox Jew at the Einstein Archives,” he said in German-accented English. “It doesn’t make sense at all.”

Einstein helped found Hebrew University in 1925. A clear-eyed if hesitant Zionist, Einstein “couldn’t imagine a Jewish commonwealth without the search for knowledge as central to its very existence,” said Hanoch Gutfreund, the former president of the university, himself a physicist.

Einstein bequeathed his papers to Hebrew University in his will in 1950. When he died five years later, his secretary, Helen Dukas, and his friend Otto Nathan began organizing and acquiring his materials.

Today, the archive counts more than 80,000 items, including the original manuscript of Einstein’s theory of relativity, his correspondence with major luminaries of his time, such as Franklin Roosevelt and Sigmund Freud, family portraits and love letters to his first wife, Mileva Maric.

The archive is behind a wood-paneled door in a gray building on Hebrew University’s Givat Ram campus in central Jerusalem. A doll in Einstein’s likeness reading The New York Times is perched in a glass box outside the entrance. The newspaper is dated 1972, even though Einstein died in the ’50s. On the day that I visited, there was a student party on the quad. “Sorry for the noise,” Grosz said as he welcomed me inside. “I forgot we have a rock concert here on Wednesdays.”

Though Grosz has been the archive’s curator for 11 years, he says that students on campus don’t recognize him. With his Orthodox getup, he is often mistaken for a mashgiach, or kosher inspector who has come to check on the school’s cafeteria.

Grosz was raised in Vienna by secular Jewish parents. His father survived the Holocaust as a hidden child, “like Anne Frank,” and his mother fled to pre-state Israel, later returning to Vienna, where she met Grosz’s father. Grosz said that he was motivated to learn more about Judaism, eventually becoming Orthodox, when he watched his father struggle over the blessings at a Passover Seder. “I felt a huge responsibility resting on my shoulders. I really saw myself in the chain of generations, and I thought, ‘I can’t let this go.’”

Grosz became active in Vienna’s tiny Orthodox community. Meanwhile, he completed his doctorate at the University of Vienna. While a student, he helped Vienna’s Jewish community rebuild libraries that were destroyed during the Holocaust, cleaning and organizing piles of books that had been stored in cellars after the war. Eventually, the collection was placed on permanent loan to Jewish Museum Vienna, where Grosz became the head librarian.

Grosz and his wife, another newly Orthodox Jew, had long considered moving to Israel to raise their children in a traditionally observant Jewish setting. At the tail end of 1999, Grosz was offered a job at Ex Libris, an Israeli company that produces library management software.

A month later, with two young children in tow, the couple moved to Israel, settling in Kiryat Sanz, a Haredi neighborhood in northern Jerusalem. Today, Grosz’s wife works as a fitness trainer.

Grosz had no particular interest in Einstein when he took over the archives in 2004. A friend sent him the job listing for the position, noting 10 criteria for applicants. Grosz said he met nine of them, such as fluency in German and an archival degree, minus the background in physics.

When Grosz showed up for the interview, the hiring committee was surprised to find an ultra-Orthodox Jew at the door. “We all thought that he made a mistake, that he was looking for something else,” said Gutfreund, who was part of the committee. But Grosz’s perfect German and his background in library sciences made the group look beyond his appearance. He was hired unanimously.

Since taking the position, Grosz has developed the kind of excitability about Einstein that one would expect from a lifelong fan. He is in awe of the fact that Einstein achieved icon status in his lifetime, even as most of his enthusiasts had no understanding of his contributions to physics. Grosz said that he has picked up some basic knowledge of physics in his role, and consults with retired members of Hebrew University’s physics department on complex questions.

Today, Grosz helps to keep Einstein relevant to the public. Under his supervision, a large part of the archive was digitized in 2012. The archive also contracted New York-based Corbis Entertainment to create and manage Einstein’s Facebook page. It counts almost 17 million followers, mostly from India, Brazil and the United States.

Grosz says he sees no conflict between his ultra-Orthodox identity and his work at the archives, even as his career is highly unusual for Haredi Jerusalem. “Nobody in my neighborhood works for a university, forget about Einstein,” he said. “You know, ‘university’ is a dirty word.”

Most of Grosz’s neighbors were unaware of his job until the Haredi journal Bakehillah ran a front-page article about him. “That was like a big eye opener, and suddenly I was the talk of the neighborhood,” he said.

Yet, to Grosz’s surprise, his neighbors were supportive and curious about his work. Some said he was sanctifying God’s name by showing the world that Haredim are “not dumb people.” Others engaged him in conversation about how belief in the Torah squares with Einstein’s science. (Grosz said theoretical physics is so technical that it touches only “very lightly” on topics like the creation of the universe, and therefore does not conflict with the Torah.) Still others quietly asked him if he had any job openings at the archive.

But Grosz also discovered that many Haredim are misinformed about Einstein, believing that he became an Orthodox Jew in his later years. “I think this probably says more about the Haredim than about Einstein,” Grosz said. “They are looking to be vindicated by such an authority.”

Grosz dispels these rumors, explaining how Einstein typically demurred when he was invited to a synagogue or to a Passover Seder during his years in America. But he also explains how Einstein helped many Jewish scientists escape the Nazis, proving his devotion to his own people.

Grosz discovered a personal connection to one such scientist at the Einstein Archives. One day, while organizing some documents, he came across a photo of a woman he recognized. Marietta Blau was an acquaintance of his parents in Vienna. Grosz researched the provenance of the image, and learned that Blau was a talented physicist who had written to Einstein, asking him to help her flee Vienna when the Nazis came to power.

I followed Grosz from his office down the hallway to the archives’ library, which holds volumes from Einstein’s personal collection as well as books about Einstein. He pointed to a paper on the black conference room table: a copy of the 1938 letter Einstein had written on Blau’s behalf to the American Association of University Women to find her a job in the United States. In the letter, Einstein lauded Blau’s “outstanding original scientific work.” “I suppose that she could also fill a teaching position but I think that she should find some opportunity for doing research,” he wrote. The American connection never panned out, but Einstein helped her get to Norway and then to Mexico.

Grosz is familiar with Einstein’s views toward the ultra-Orthodox, and he is unbothered by them. He explains Einstein’s mentality the same way he explains his parents’ secularism to his children: “Grandma and Grandpa are nice people, but they don’t understand the importance of mitzvot; nobody explained it the right way and now they are too old to understand, and that’s it.”

The greatest scientist of our time disparaged ultra-Orthodox Jews, but it wasn’t his fault, at least according to Grosz: “So he didn’t know any better.”