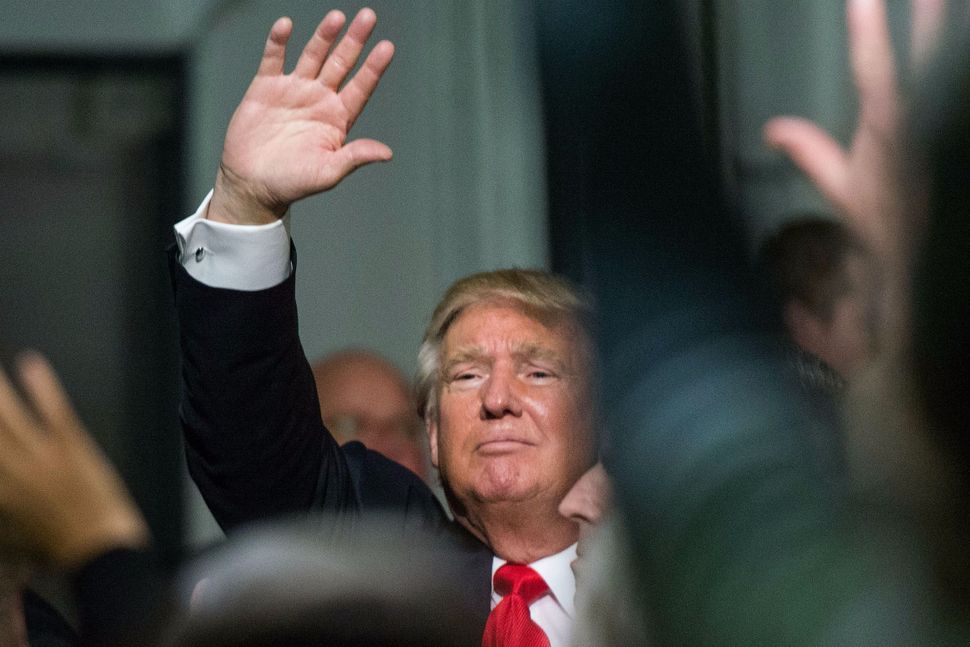 For the Republican Party, a tough job just got a little tougher thanks to Donald Trump.

For years, Republicans, backed by some influential donors, have carefully cultivated the vote of Jewish-Americans who regard the security of Israel their top concern. Less than a week ago, a bevy of presidential candidates stood before a group of Jewish conservatives in Washington, asking for their support and declaring their solidarity with the Jewish state.

But Trump’s proposal to bar the entry of all foreign Muslims into the United States has upended some of those efforts, prominent Republicans said. His planned visit to Israel at the end of December is being viewed with increasing concern.

“It’s unquestionably unhelpful. His comments are disgusting,” Norm Coleman, a former senator from Minnesota and a board member of the Republican Jewish Coalition, told Reuters.

“The Jewish community, collectively, has that institutional memory, and institutional scars from previous events in history where a group based solely on religion was persecuted,” said Lee Cowen, a Republican strategist, adding that Trump was damaging the party.

“They are very weary of somebody repeating the same kind of rhetoric but just changing the name of the religion.”

Earlier this week, Trump – the front-runner among Republicans seeking their party’s nomination ahead of the presidential election in November 2016 – called for prohibiting Muslims, including immigrants, students, and tourists, from entering the United States in the wake of the shootings in California by two Muslim radicals that killed 14.

Some Jewish Republicans, too, said they were done with Trump. Reuters spoke to five who as recently as Sunday were supporting the outspoken billionaire, but since then have been re-thinking.

“His position is a little overboard for my taste,” said one of them, Paul Cohen, 59, of Beaverton, Oregon, who retired as a manager from Intel seven years ago. “I am considering second choices, like Ted Cruz, which I wasn’t doing before.”

“It’s just one too many off-the-cuff remarks that are not well thought out,” Cohen said. “This just seems way over the top.”

In the 2008 presidential election, Barack Obama secured 78 percent of the Jewish vote. Four years later, the Republican challenger, Mitt Romney, attempted to drive a wedge between those voters and Obama by attacking the administration’s policies in the Middle East and suggesting he would be a more loyal partner to Israel and its conservative prime minister, Benjamin Netanyahu.

Obama ultimately secured 69 percent of the Jewish vote on his way to re-election. Still, Romney did better than any Republican contender in a quarter-century.

As part of his pitch, Romney released an ad that celebrated Israel’s religious tolerance. “Like the U.S., Israel respects the rights of people of all religions,” the ad said.

Trump’s proposal struck some in Israel as a clear departure from that history of tolerance.

“We Jews, who have been the victims of gross and hostile generalizations throughout our history, should be first out there to condemn it,” Michael Oren, the American-born former ambassador to the United States from Israel who has been critical of Obama, told the Times of Israel.

While some Israeli politicians urged Netanyahu to cancel a planned meeting with Trump, Elliot Abrams, who oversaw Middle East policy in the George W. Bush administration, said Netanyahu should treat Trump like any U.S. politician seeking an audience.

To not do so would signal “the kind of interference in American politics everyone complains about,” Abrams said. Even so, Abrams said Netanyahu should only meet with Trump in private, away from the television cameras.

Ironically, Trump is the only presidential candidate who lives, makes deals and hobnobs among some of the world’s most prominent Jewish power figures on the Upper East Side of Manhattan.

He is also the only Republican candidate with Jewish grandkids: his daughter, Ivanka, became Orthodox after marrying real estate scion Jared Kushner. The family keeps kosher, observes the Sabbath and attends the synagogue Congregation Kehilath Jeshurun.

Ivanka’s rabbi, Elie Weinstock, says he does not know Trump personally. Unlike his daughter, “He’s not a regular worshipper.”

But Weinstock added that, like many in his congregation, he disapproves of Trump’s recent pronouncements about banning Muslims from the United States.

“These statements are very out of line with Jewish values, with American values,” he said. “I’ve gotten some calls.”