Rage and a Non Sequitur? To protest against the immigration of Muslims and Syrian refugees, demonstrators in Wroclaw on November 18 burn an Orthodox Jew in effigy. Image by Reuters

When some 50,000 people turned out in Warsaw recently to protest a plan by Poland’s ruling party to pack the nation’s constitutional court, the hard right-wing political faction responded quickly with a counter-demonstration of its own. Its counter-protest featured, among other things, a placard that mocked those claiming to defend democracy as “the committee to defend Jewish-Communist wealth.”

At around the same time in Wroclaw, Poland’s fourth largest city, crowds at a parallel demonstration to support the recently elected Law and Justice party shouted, “Wroclaw is being de-Polanized as the Jews are buying up homes in the city.”

At another Wroclaw demonstration, held November 18 to protest a European Union plan that would see Poland admit some 7,000 Syrian refugees, demonstrators denounced the proposed immigrants as Islamists — and to somehow add to this point, they set fire to a previously prepared effigy of a Hasidic Jew holding the E.U. flag. 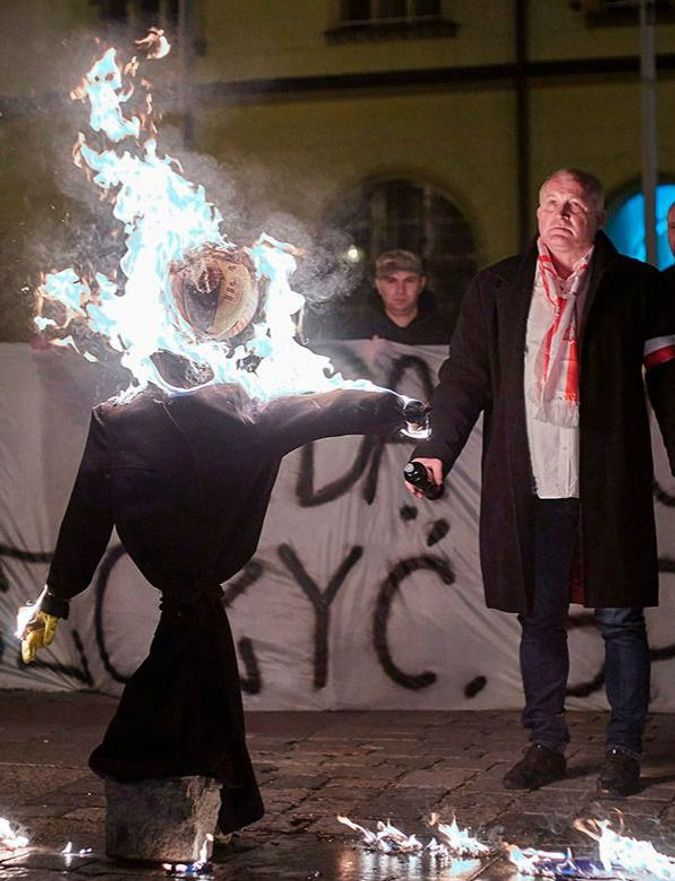 Rage and a Non Sequitur? To protest against the immigration of Muslims and Syrian refugees, demonstrators in Wroclaw on November 18 burn an Orthodox Jew in effigy. Image by Reuters

“God, Honor and Fatherland,” the crowd then chanted.

Since the October 25 elections that gave the strongly nationalist Law and Justice Party an absolute majority in parliament, Poland has been a nation in crisis. Like several other countries in Europe, the right-wing party’s rise back to power after eight years in opposition was fueled in part by anti-immigrant furor, but also anger with the corruption of the government led by the incumbent Civic Platform party. A backlash from rural Poles who feel left behind by the country’s free-market reforms also played a big role. But critics charge that Law and Justice is now using its absolute majority to implement anti-democratic measures they denounce as “Putinist.”

And amid all this, somehow, Jews have become a focus of ire among the party’s defenders in the country whose huge Jewish population was decimated in the Nazi Holocaust.

“This government harbors anti-Judaic sentiment which can easily become anti-Semitism,” said the Rev. John Pawlikowski, professor of social ethics and director of the Catholic-Jewish studies program at the Catholic Theological Union, in Chicago.

Among other things, Law and Justice, known also by its Polish acronym, PiS, has failed to denounce the effigy burning in Wroclaw. The party also has appointed a defense minister who’s made anti-Semitic comments and has, via its culture minister, Piotr Glinski, threatened to sue those it believes guilty of “defamation against Poland.” 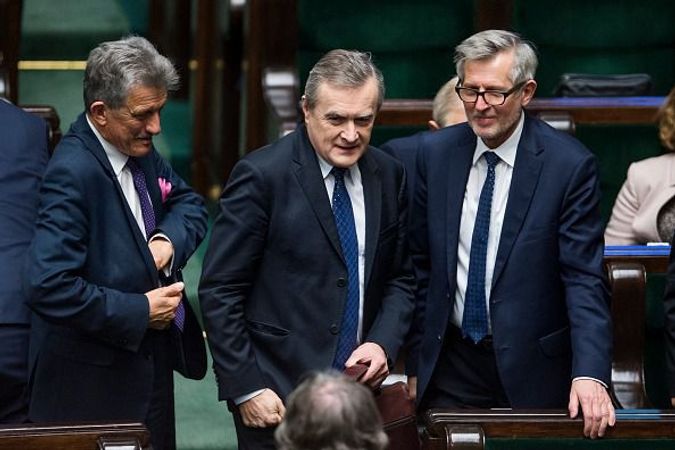 See You in Court: Piotr Glinski (center), Poland’s minister of culture, has threatened to sue those he believes guilty of defaming his country. Image by Getty Images

“It reminds me of the Communist takeover in the 1940s,” said Andrzej Zoll, a former ombudsman for the constitutional court.

David Harris, executive director of the American Jewish Committee, will soon visit Warsaw to discuss the current situation with members of the new government. In a telephone interview December 1, Harris told the Forward that any move away from the full throttle of democracy that Poland has experienced since 1989 would be a very disturbing development.

Harris cited AJC’s partnership with the Forum for Dialogue, the largest Polish nongovernmental organization dealing with Polish-Jewish relations, which has sponsored wide-ranging Polish-Jewish dialogue since 1996.

AJC has been involved in Poland for 26 years. “We will continue to remain involved with democratic forces there,” Harris said.

Many see the new government’s drumbeat for Polish patriotism as cause for concern.

Barbara Engelking, director of the Polish Center for Holocaust Research at Warsaw University, said she saw the form of national identity that PiS promotes as an immature and simplistic model that constitutes a setback in Polish thinking about the past.

Citing historical research in recent years that deals with Polish crimes against Jews, such as the 1941 massacre at Jedwabne and the murder of Jews elsewhere during the German occupation, Engelking said she had hoped this research would give the national discussion a deeper dimension that would force serious reflection and help build a mature, complex national identity with an awareness not just of Polish victimhood, but also of the crimes that Poles have committed against Jews.

Jan Zaryn, a PiS senator, disagrees. During a phone interview, he denied that nationalists were rewriting history. “We do not have to lie about our history, because it’s beautiful,” he said, citing the valor of the Polish underground during the German occupation and the loss of 3 million non-Jewish Polish lives under the Nazis, the same as the number of Polish Jews. Zaryn also denied that there is deeply rooted anti-Semitism in Poland.

Polish prosecutors are considering a libel suit against Jan Gross, a Polish-born Princeton University professor who recently wrote an opinion piece that appeared in the German newspaper Die Welt, in which he claimed Poles killed more Jews than they killed Germans during the German occupation. Gross is the author of several books about Polish atrocities during World War II, including “Neighbors: The Destruction of the Jewish Community in Jedwabne,” about the 1941 Polish massacre of Jews.

The Polish American Congress, representing 9.5 million Polish Americans, doubts that its countrymen murdered between 350 and 1,000 Jews, as generally estimated by historians, in Jedwabne then. Frank Milewski, who is in charge of documenting Holocaust information for the organization, said German bullet casings were found in the barn where the Jews were burned to death. He said no conclusions could be reached unless the bodies were exhumed. Frank Spula, president of PAC, declined comment.

In America, the Anti-Defamation League has expressed concerns about the government not taking the opportunity to distance itself from expressions of anti-Semitism and anti-Semitic acts. Foreign Minister Witold Waszczykowski responded to a call by the ADL on the government to condemn the burning in effigy of a Hasidic Jew at the November 18 Wroclaw protest by invoking “the Jewish lobby” and calling for Poland to create its own lobby and narratives.

At a November 17 conference in the Presidential Palace, called by President Andrzej Duda, representatives from Polish museums and other cultural institutions were told to galvanize Polish nationalism and to discard narratives that brought Poland shame. Glinski told the gathering that building a national identity was an important component in the PiS philosophy of government.

Notably, there was no E.U. flag in the conference room. According to Marcin Zyla, an editor at the Krakow-based liberal Catholic weekly Tygodnik Powszechny, the absence of the E.U. flag was a symbolic rebuke to the secular Western European community, which PiS sees as an existential threat to Catholic Poland.

“The push to create a bright image abroad is not new, but this government is promoting PiS policy much more brazenly and aggressively,” said Jan Grabowski, a Polish-born professor of history at the University of Ottawa, in Canada.

Polish xenophobia was very much evident during the November 18 demonstration in Wroclaw, when demonstrators demonized Muslim refugees, warning that the refugees were not welcome in Poland.

“Raped, beaten and murdered by the Islamic savages,” the crowd shouted. “Do you want it on our streets?” But what was the connection there between that and the burning in effigy of the Hasidic-looking Jew holding an E.U. flag, an action that Poland’s B’nai B’rith was quick to denounce?

“The Jew has always been portrayed in Polish folk culture as an eternal threat and a stranger,” said Piotr Pazinski, editor in chief of Midrasz, a Jewish cultural magazine in Warsaw. “Holding an E.U. flag fortifies their racist belief that Jews are orchestrating an E.U. plot to destroy white Catholic Poland.” 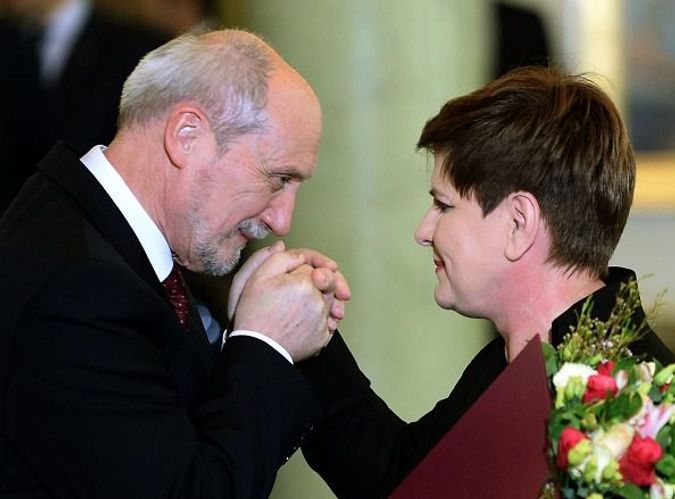 Powerful Pair: Poland’s new defense minister, Antoni Macierwicz (left) has suggested that the anti-Semitic Protocols of the Elders of Zion may be valid. Prime Minister Beata Szydio (right) has rebuffed demands to revoke his appointment. Image by Getty Images

So far there has been no official government denunciation of the Wroclaw incident.

“The silence of the government is deafening,” said Michael Schudrich, chief rabbi of Poland, although he believes the Wroclaw demonstration consisted of a small group of marginal people.

But some Jews outside Poland with years of philanthropic investment in the country are reluctant to stigmatize the new government. Sigmund Rolat, a Holocaust survivor and funder of Warsaw’s new Museum of the History of Polish Jews, which also receives government support, urged caution.

“Remember, everything is relative,” he said. “We know about the threat to Jews in Western Europe. By comparison, Poland is a safe haven for Jews. The mayor of Wroclaw has ordered an investigation of the incident, and they know who set the fire.”

Rolat has played a major role in the success of the annual Jewish Culture Festival in Krakow and is an honorary citizen of his hometown, Czestochowa, for his contributions to cultural life.

The museum’s director, Dariusz Stola, a history professor, stressed that he does not expect any pressure from the government to change the museum’s portrayal of Polish behavior during World War II. “The museum is a huge success,” Stola said.

Repeated efforts to reach philanthropist Tad Taube, whose foundation is a major supporter of Jewish life in Poland, were unsuccessful.

But the xenophobia and bigotry evident in the comments of government officials and in public behavior at pro-government rallies has left many observers pessimistic about the prospects for civil liberties and democratic values in Poland.

In an article in Foreign Affairs magazine, Mitchell Orenstein, a University of Pennsylvania history professor of Slavic studies, wrote “goodbye to gay rights, in-vitro fertilization, abortion in the case of potential harm to the mother, and other liberal policies.”

As for the future of the 10,000 members of Poland’s organized Jewish community (estimates of the total number of Jews in Poland beyond that core range up to 20,000), Konstanty Gebert, a columnist and veteran of the underground fight against communism, said: “If this democracy is curtailed, Jewish life will shrivel. We are too few to hunker down and weather the storm. Our future may well be on the line.”