After Terror Attack, Israel Funding for Arab Towns May Come With Strings Attached 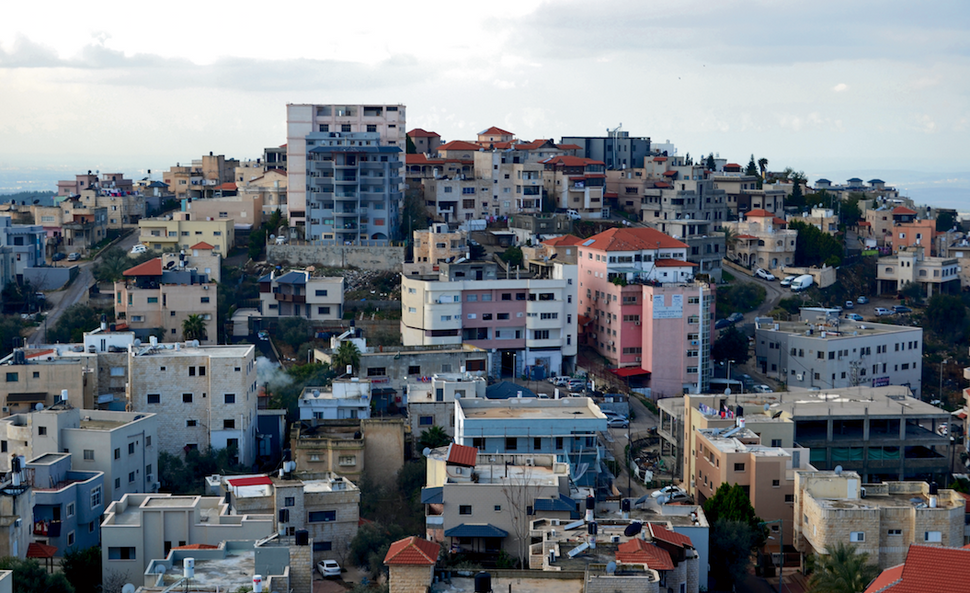 UMM AL FAHM — With some 50,000 residents, this northern town, the largest Muslim municipality in Israel, is a densely packed cacophony of blue, pink and white homes perched on a tangled maze of city streets. With no major industries in the city, most of the men work elsewhere in construction. There are no hospitals here. Public buses are a rare sight; the city received bus service just two years ago.

This contrasts sharply with Nahariya, another northern Israeli city of similar size, but this one Jewish. Connected to the rest of Israel through a gleaming coastal railroad, Nahariya is the home of several major Israel firms, like the Soglowek meat processing plant, which provide local employment. A large public hospital serving an estimated 500,000 residents across the Western Galilee also employs many locals. The town’s streets are laid out on a neat and orderly grid.

Umm al Fahm and Nahariya exemplify a persistent disparity in public resources between Jewish and Arab localities. Now this might be about to change. At the end of December, the Israeli government approved what some are calling a historic plan to redress a systemic neglect of Arab towns and villages. Estimates of the government sums to be invested range from $2 billion to $4 billion.

But following the killing of two Jews and an Arab Bedouin by an Israeli Arab man on New Year’s Day on the streets of Tel Aviv, those changes are now at risk. Since the murders, Knesset members have been seeking to tie the government funding initiative to a set of conditions with which Israeli Arabs would have to comply, purportedly to better integrate them into Israeli society.

“We are saying that if a local council doesn’t take steps for the good of the State of Israel, then it shouldn’t be able to receive funds from it,” Immigration Minister Ze’ev Elkin told Israel’s Channel 2. Prime Minister Benjamin Netanyahu has appointed Elkin to prepare a plan in response to the Tel Aviv shootings.

It’s a conundrum Arab Israelis have come up against before — mostly notably in the early 2000s, when then-prime minister Ariel Sharon said investing in Arab cities depended on the ideological cooperation of Israeli Arabs.

Today, as then, Arab leaders are crying foul on the proposal to constrain funds that they say are rightfully theirs as taxpaying citizens in order to redress historic inequities.

“It is making our rights conditional,” said Umm al Fahm resident Yousef Jabareen, a Knesset member from the Arab-Jewish leftist party Hadash, now part of the Joint List of Arab parties. “These are funds that are supposed to address past injustices.”

Should it be implemented, this plan is considered pathbreaking — in contrast with several other economic outlays in recent years — because it not only would give out more money to Arab towns and villages; it also would correct the way such funds are distributed to guarantee more equal financing in the future. The plan, spearheaded by the Ministry of Finance in consultation with Arab civil society groups, will change 15 budgetary formulas to increase funding for employment, industry, highways, infrastructure, public transportation, education, housing, public security and more, according to Sikkuy — The Association for the Advancement of Civic Equality.

That this plan was approved by the staunch right-winger Netanyahu was a great surprise to many. His endorsement of the proposal in December won widespread praise as a step toward redressing historical inequality.

Still, Arab leaders have withheld celebrating. Jafar Farah, head of the Mossawa Center for Arab rights, noted that the sum is just a fraction of the $8.2 billion his group estimates is needed to fully amend the disparity. Arab leaders are also holding their breath until they see it implemented, citing the lack of progress with similar proposals in past years.

An indirect reminder of those past promises stands at the entrance of Umm al Fahm itself, where sculptures in ornate Arabic script commemorate three local boys killed in demonstrations by the Israeli police at the start of the second intifada, in 2000. Their deaths, along with those of 10 other Arabs, provoked a sense of broader crisis, and not a little soul-searching, about the Israeli Arab community’s relationship to the state. In response, the government appointed an official commission led by High Court Justice Theodore Or to investigate the violent outbreak. The Or Commission, as it was called, found that one of the root causes was the government’s “neglectful and discriminatory” policies toward its Arab citizens.

“The state,” the commission found, “did not do enough or try hard enough to create equality for its Arab citizens or to uproot discriminatory or unjust phenomena.”

According to Farah, the Or Commission did not specify just how much funding was needed to rectify the historic neglect. But the ensuing years saw only minimal outreach to Israel’s Arab minority, which makes up 20% of the population. Among other things, Farah said, the government promised 4 billion shekels (about $1 billion in today’s terms) in 2000, but delivered only 2.5 billion shekels about eight years later.

In public comments one year after the release of his report, Or himself criticized the government for ignoring or failing to implement plans in response to the commission’s recommendations. He criticized in particular a government panel’s proposal to link more equal treatment of the Arab sector to a willingness by Israeli Arabs to perform national service in place of the army service most Israeli Jewish males do.

This lack of implementation could be traced largely to decisions taken by Sharon, under whose government Or issued his report. “The program’s success,” Sharon said at the time, “depends on the complete cooperation of the Arab sector and its leadership in a way that will create an ideological platform for real coexistence.”

Sharon security aide Reuven Gal, who drafted the government’s response to the Or Commission, told an audience at The Hebrew University of Jerusalem that the government’s strategy was “to ensure a friendly minority.”

In January I made an appointment to tour Umm al Fahm with Jabareen’s aid, Waseem Hosary. He asked me to call him when I entered town instead of giving me an address at which to meet him. “That’s part of the issue,” he said. “We don’t have any addresses.” The city was too disordered for street numbers. 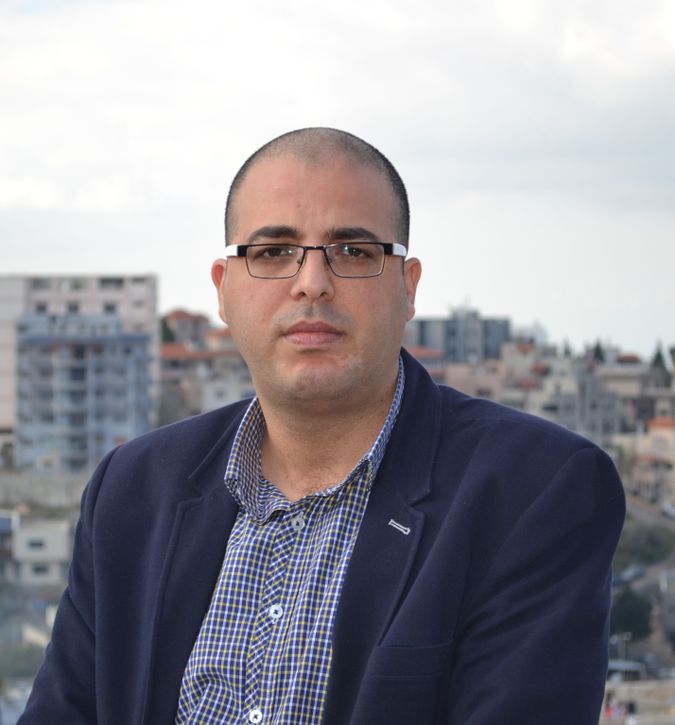 Hosary directed me to his office in a strip mall, and he drove me through the city’s haphazard patchwork of winding streets. Hosary explained that residents were forced to build on top of existing structures to accommodate the growing population. I pointed out some homes that looked like mansions, but Hosary said that their appearance was deceiving: Multiple generations lived inside.

“The government says you are rich because you have big houses, but maybe 20 people live in one house,” he said. Moreover, he explained, the financing plan wouldn’t actually help in this regard, because it doesn’t expand the municipal boundaries of Umm al Fahm. As it did with many Arab towns after the state’s establishment in 1948, Israel declared the lands around Umm al Fahm as state land, hemming in the city’s natural growth. According to Farah, the city limits have been expanded since then, but not enough to accommodate the population.

On a steep road we passed a police car. Next to it, an officer crouched by another vehicle; Hosary guessed that he was inspecting it for bullet holes. Umm al Fahm has been plagued in recent years by crime, exacerbated by the prevalence of illegal guns in the city. According to Hosary, there are nightly shootings in the dense neighborhoods of Umm al Fahm, not necessarily at people but at houses and cars. Occasionally the guns have been directed at people, too. He said there have been several unsolved murders in recent years.

For years, Arab leaders have been asking the government to bring in more policemen, but the calls have gone unanswered. Mudar Younis, mayor of Arara, the hometown of Tel Aviv gunman Nashat Melhem, said Arab Israelis had warned that illegal guns would be used outside their communities if access was not curtailed. He blamed the government for the problem in an interview on the Arab-Israeli Bokra website.

“We want them there,” Ayman Agbaria, a lecturer at Haifa University from Umm al Fahm, said of policemen. “Arabs want policemen and not homeland security. They want policemen in their streets, but not Shabak [Shin Bet]” — the Israeli security services — “in their homes and houses.”

Hosary took me to Ibn Sina, a hummus restaurant popular with Israeli Jews en route to weekend hikes in northern Israel. There we met Ahmad Mahameed, a 36-year-old waiter. Mahameed said he believed that poor education and the quality of the streets were the two biggest problems facing Umm al Fahm. He said that he was hopeful to hear about the government plan, but was now concerned that it would not come through. “I’m worried that what happened in Tel Aviv will affect the plan, and the government will cancel it,” he said.

Mahameed’s concerns are well founded. After the Tel Aviv shooting, Netanyahu pointed a finger at Israel’s Arab communities in an address outside the Dizengoff pub. He cited the lack of law enforcement in these towns as a factor in the violence, prompting critics to ponder just who was at fault for that lack of policing.

“I am not prepared to accept two States of Israel, a state of law for most of its citizens and a state within a state for some of them, in enclaves in which there is no law enforcement and in which there is Islamist incitement, rampant crime and illegal weapons that are frequently fired at such events as weddings,” Netanyahu proclaimed. “This era has ended.” He said that he would place more policemen in Arab communities, “and demand from all of them loyalty to the laws of the state.”

Soon after, the prime minister’s office set up a task force spearheaded by Elkin and by Likud Knesset member Yariv Levin to examine whether the funding plan should come with preconditions. According to media reports, those preconditions could be based on law enforcement, on the enforcement of planning and building codes, and on, controversially, the encouragement of Israeli Arab teens to perform national service. Israel’s Arab citizens typically do not serve in the army, but some perform national service.

Edan Ring, director of public relations at Sikkuy, said he believed that the discussion of preconditions was all bluster, and that the funding would go through as planned.

“We think it is a cover, to keep popular with the right-wing voters,” he said.

Even so, Arab-Israeli leaders are keeping vigilant about the new plan.

“For me, this was like too little, too late,” Agbaria said. “But it’s a positive step in the right direction. We need to make sure this plan will be implemented.”

After Terror Attack, Israel Funding for Arab Towns May Come With Strings Attached