WASHINGTON — In an election cycle dominated by mega-donors, Sheldon Adelson, the brash, pro-Israel Las Vegas casino mogul, has become the symbol of powerful billionaires courted by candidates for their game-changing financial support.

But out on the East Coast there is another, quieter Jewish mega-donor drawing attention among Republicans: Paul Singer, the New York hedge fund billionaire, philanthropist and political player who is betting on Marco Rubio as the candidate able to lead his party back to the White House.

Now, with Rubio’s strong third-place finish in the Iowa caucus, Singer’s early backing for the Florida senator looks more important than ever for the ballast it has given his bid—and the influence that the early backing is likely to give Singer.

Singer, in many ways, is the anti-Adelson. While the Las Vegas casino mogul is known for his blunt style, enormous contributions and single-issue pro-Israel agenda, Singer is described as calculated and methodical, mainstream in Republican terms, and with surprising liberal streaks lining his strong fiscal conservatism. He is also known for his caution in political giving.

Moreover, Singer is anything but a single-issue donor. In fact, some of the issues close to his heart can at times seem difficult to reconcile. But Singer manages to be both a major donor of a Republican Party shifting gradually toward the right and a prominent champion of gay and lesbian rights without losing his political sway.

“Every single presidential candidate sought out Paul’s support, including Donald Trump and including Ted Cruz, who tried many, many times to get his support,” said a source close to Singer who insisted on anonymity to preserve his relationship with him. “They all know very well where he stands on the issue, and that has not caused any problem.”

Singer grew up in Teaneck, New Jersey, one of three children in a Jewish family. After graduating from Harvard Law School he practiced law for several years before launching his career in finance by launching his own firm, Elliott Management, in 1977. He did so with an initial capital of only $1.3 million.

The first few years were tough, but Singer later said that losses he sustained before founding his own firm taught him to take a risk-averse course in his future investments, a policy he still adheres to many millions of dollars later.

With his closely trimmed white beard and thin wire glasses, Singer, 71, has become a legend in financial circles, credited with warning finance ministers of the seven largest economies in 2007 of the upcoming global meltdown. He pointed presciently then to the vulnerability of major banks.

Singer rarely speaks to the press, but feels at ease in closed-door briefings in which he presents his economic, and at times political, worldview. He lives on New York City’s Upper West Side in a luxury apartment building and also has a home in Aspen, Colorado. For fun, according to reports, Singer, who has been divorced since 1996, plays the piano in a rock ensemble with his two sons. He once even jammed onstage with Meat Loaf.

As a hedge fund manager, Singer specializes in distressed assets, buying companies in trouble and making them profitable. He was also a pioneer in buying up the debt of bankrupt nations at a discount and then getting them to pay up in full, or as near to in full as possible. This has included Argentina, where Singer and his Elliott Management subsidiaries refused to join almost all of the country’s other creditors in a restructuring plan that would have given them 30 cents on the dollar. Singer’s firm and two others demanded full repayment. When U.S. courts supported them, the firms’ efforts to find and seize Argentine assets around the world generated an ongoing legal clash between the financiers and Buenos Aires. At one point, Argentina’s then-president, Cristina Fernandez de Kirchner, compared Singer and his two fellow creditors, who are also Jewish, to Shylock, Shakespeare’s infamously anti-Semitic caricature of a Jewish creditor.

Another business dispute that reached the headlines involved South Korean giant Samsung last year. As tensions grew, an article in a newspaper sympathetic to Samsung owners noted that “Jewish money has long been known to be ruthless and merciless.” The company itself published on its website a cartoon depicting Singer as a vulture. Samsung later took down the cartoon after being condemned by several Jewish organizations.

Singer’s net worth value is estimated at $2.1 billion, making him, according to Forbes, the 327th richest person in America.

The billionaire investor’s political involvements mirror his activist style of doing business. Not only does he put up big money himself — as much as $17 million in the past 25 years — he also makes sure to engage other donors, bundle for his candidates and strictly screen politicians before putting his dollars behind their campaigns.

When making political decisions, the source close to Singer said, the New York billionaire is guided by two major concerns: national security, to which he brings a hawkish pro-Israel and neoconservative outlook, and pro-free-market economic policies. This mix, while representing the classic, old-time profile of Republican donors, has shifted in recent years as the power of socially conservative contributions increased.

“A big part of his concern on national security centers on America’s role in the world and how strongly it stands by its allies,” the source said, adding that Singer believes in the need for America to have “a more muscular role in the world.”

Singer is a board member of Commentary magazine, which has been home to many Jewish neoconservative thinkers, and is considered close to scholars Frederick and Kimberly Kagan, both known for their hawkish views and support of assertions of America’s military power globally. Singer is also a board member of the Republican Jewish Coalition and participates in many of the group’s political gatherings.

On economic issues, Singer is a fiscal conservative with a twist: He believes in market forces, but does not rule out stricter financial regulations. Still, he is opposed to the Dodd-Frank reform act, passed by Congress after the financial crash of 2008 and considered the flagship effort to rein in Wall Street excesses. Most of his criticism in recent years has been directed at the Federal Reserve’s zero interest policy, which, Singer argues, contributes only to economic inequality. 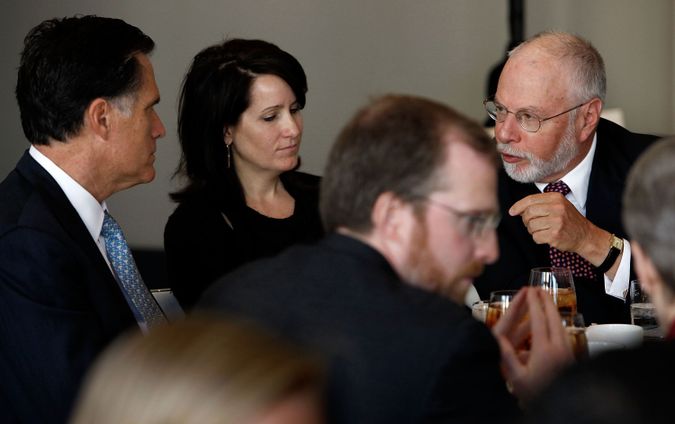 These principles led Singer to support former New York City mayor Rudy Giuliani in his failed 2008 presidential run. And now they have moved him to back the Florida senator Marco Rubio early on in his bid for the Republican nomination — another way he differs from Adelson, who so far has remained on the sidelines of the crowded GOP race.

In an October 2015 letter to top GOP donors, Singer said that, as president, Rubio “will make it clear to Israel’s adversaries that America stands shoulder to shoulder with the Jewish state.” He highlighted what he sees as the young senator’s ability to take on former secretary of state Hillary Clinton and win. “He is the best explainer of conservatism in public life today, and one of the best communicators the modern Republican Party has seen,” Singer wrote.

Singer backed Rubio in his first bid for Senate, going against many in the Republican establishment who supported the former Florida governor Charlie Crist.

A look through the list of philanthropic causes Singer supports provides a peek at his diverse interests. Alongside Jewish causes that include, among others, Boston’s Jewish federation, the teen leadership organization BBYO and Friends of the Israel Defense Forces, Singer supports a slew of educational programs. He also provides generous support to the Human Rights Campaign, the leading national organization fighting for lesbian, gay, bisexual and transgender rights.

Singer became immersed in gay rights issues following his gay son’s struggle to marry. He has since been an advocate for marriage equality and a key financial backer of LGBT rights organizations. In some cases, Singer has served as a bridge to conservatives and Republican donors for these groups, allowing them to connect to supporters on the right who had previously been beyond reach.

“It wasn’t just the money,” said Evan Wolfson, founder and president of Freedom to Marry. “Singer and his team were key strategic partners to win over conservatives and to use his leadership to bring in right-of-center funders.”

As the primary season begins in earnest with the Iowa caucuses, Singer intends to continue helping his candidate, Rubio, win over donors and voters. Singer, the source close to him said, has “real concerns” regarding the other candidates’ prospects of winning the general elections. This includes Donald Trump, the current leader of the GOP pack, who, in Singer’s eyes, “is not a Republican.”