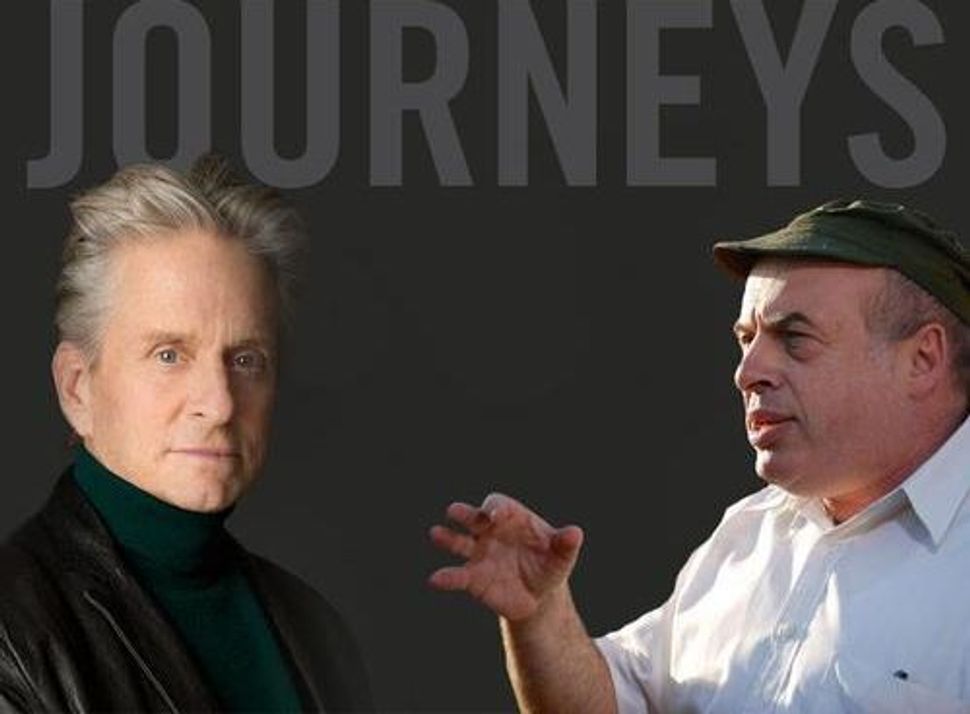 The choice of Douglas for the Genesis Prize, whose stated aim is to recognize excellence and achievement by an individual who can serve as a role model for the Jewish community and as an inspiration for the next generation of Jews, sparked surprise when it was announced in January 2015. The son of a Jewish actor Kirk Douglas a his non-Jewish, British wife, Douglas is himself married to the non-Jewish actress, Catherine Zeta Jones and has long identified as secular.

Yet, there he sat at Brown, in conversation for more than an hour with Sharansky, the former Soviet dissident turned Israeli leader, talking about both their personal Jewish lives and Israel issues.

“It’s sort of amazing that I’m sitting next to this gentleman [Sharansky] this evening,” Douglas said. Sharansky is chair of the Genesis selection committee and when he and Douglas met, they found a common interest in encouraging college-aged Jews, sparking the idea for the tour. 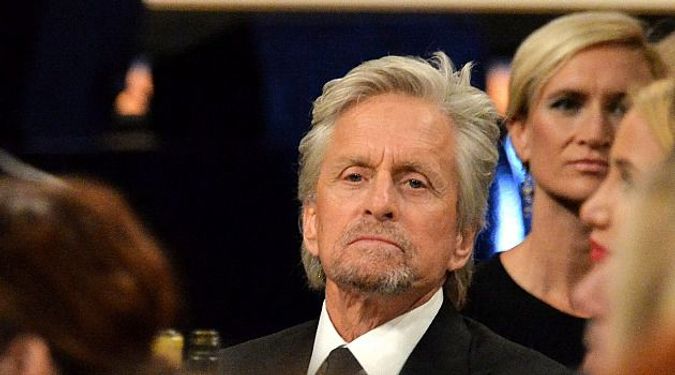 “Tonight is about Jewish journeys and people who have connected with Judaism in different ways,” said Eric Fingerhut, President and CEO of Hillel International, introducing the program. He referred to the week’s Torah portion, which includes the Ten Commandments and cited the rabbinic teaching that all Jews past, present and future were at the foot of Mt. Sinai when it was given. “We know that Michael Douglas and Natan Sharansky met at the foot of Mt. Sinai, but their paths from there have been remarkably different,” said Fingerhut.

About a quarter of those in the audience of about 500 were Brown students, with the rest from the Providence community. True to Brown’s reputation for liberalism and activism, about 20 students protested the event in the building’s lobby, holding signs criticizing Israel as an occupier and oppressor of Palestinians. During the event, the protesters chants could be heard in the hall, but none entered the hall and there were no disruptions.

Members of Students for Justice in Palestine at Brown wrote in a protest article in the Brown Daily Herald, “This is an affront to academic freedom: Brown students should not be exposed to propaganda campaigns executed by state powers, especially colonial state powers.”

Sharansky spoke to some of the protesters before the event, but said, “They don’t want to talk. They want to shout. It’s not about human rights, they want to destroy the state of Israel.”

Several of the Brown students who asked questions of Douglas and Sharansky were sharply, though respectfully, critical of Israel and of the Jewish Agency for Israel, which Sharansky heads, for their support of exclusively Jewish settlements in the Israeli-occupied West Bank. Sharansky denied that the Jewish Agency has encouraged any illegal settlements.

Douglas, who received the original $1 million prize and then another $1 million when a philanthropist matched the money, is giving away the money to support work promoting the inclusion of intermarried families in Jewish life.

“I was honored to receive the Genesis Prize last year,” Douglas said, “and it has encouraged me to deepen my commitment and belief that we must all be more inclusive in order that the Jewish faith and culture thrive.” The money is being split between projects being developed by Hillel and the Jewish Funders Network Matching Grant Initiative.

One of the Hillel projects, a “Jews of the University” Facebook page was inspired by a “Jews of Brown” Facebook program developed over the last two years through Brown RISD Hillel. In a format similar to the popular “Humans of New York” blog, the Facebook pages allow students to talk about their Jewish identities and connections.

The other two stops on the tour are at Stanford University February 2 and the University of California at Santa Barbara (where Douglas received his undergraduate degree) February 3.

Douglas said he spent much of his life with no connection to Judaism. He said his father, actor Kirk Douglas, had an Orthodox childhood but then fell away from Judaism and married someone not Jewish. Douglas said he got the message growing up that he wasn’t Jewish because his mother was not, and he had only occasional brushes with Judaism, including a teenage summer spent in Israel while his father made a movie in Israel in the mid-1960s based on the life of Jewish-American military officer David “Mickey” Marcus.

“Religion was not a part of my life,” Douglas said, until he remarried to Zeta-Jones in 2000 and their son, Dylan, independently developed an interest in Judaism. Dylan Douglas, he related, asked to have a bar mitzvah. “He brought a spirituality to our family,” Douglas said, with the family travelling to Israel together.

Douglas said he was surprised when the Genesis Foundation called to tell him that he would receive the prize and felt initially unworthy. But then he embraced the award.

“It was a cathartic moment for me,” said Douglas. “I didn’t realize how much I want to be accepted.” He added, “I’m secular. I am just happy to be part of the tribe. Jewish values are a beautiful way to conduct your life.”

Douglas and Sharansky questioned each other throughout the evening, and Sharansky at one point said to Douglas, “How about a bar mitzvah?” After the laughter of the audience died down, Douglas, 71, said, “I might do that,” though he quickly added that be might wait, according to some Jewish custom, until he is 83.