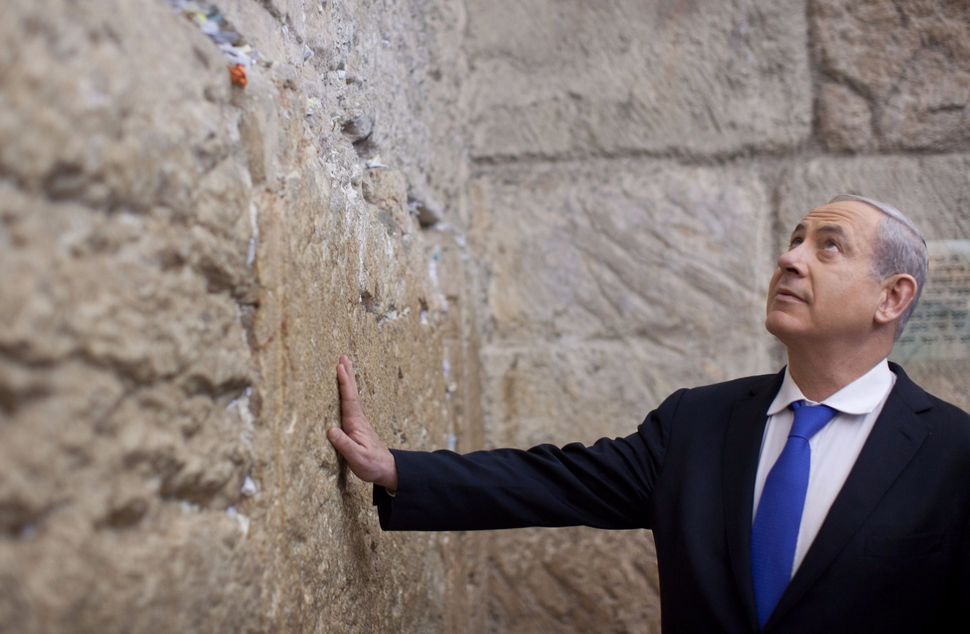 Natanyahu at Kotel Image by Getty

JERUSALEM — A chorus of non-Orthodox and Diaspora leaders praised the landmark interdenominational compromise on the Western Wall.

The compromise will expand the wall’s egalitarian section and place it under the authority of a pluralist committee, while solidifying haredi Orthodox control over the site’s traditional, Orthodox section. Women of the Wall, the women’s prayer group that holds monthly services in the Orthodox section, will move to the non-Orthodox section once the deal is implemented.

“If and when this transition is complete, the new section will make way for great change,” read a statement from the women’s group endorsing the change. “Women will pray at the Kotel as equals, as active participants and leaders in rituals, ceremonies and of course in reading from the Torah.”

The agreement was negotiated among Women of the Wall, the site’s haredi Orthodox leadership, the Jewish Agency for Israel, the Israeli government and the Reform and Conservative movements. All parties praised the decision as path breaking.

Speaking to JTA, Jewish Agency Chairman Natan Sharansky said the compromise ensured that “everybody wins in the end,” while Prime Minister Benjamin Netanyahu called the deal “a fair and creative solution.”

A poll by the Ruderman Family Foundation, released Sunday, found overwhelming Israeli support for accommodating non-Orthodox movements at the site. Four-fifths of Israeli Jews said “all Jews, including Reform and Conservative, should feel that the Western Wall belongs to them.”

The Israeli and American branches of both the Reform and Conservative movements also backed the deal. Rabbi Gilad Kariv, CEO of Israel’s Reform Movement, said in a statement that the compromise is “just the beginning of our efforts to ensure that the Jewish state of Israel is indeed a state where all forms of Judaism are practiced freely and without state prohibition.”

“The right to equality has received governmental recognition,” Hess said. “From now on, solutions to arguments on issues of religion and state will require recognition of the legal right to freedom of choice.”

The Jewish Federations of North America, which lobbied heavily for the compromise, said in a statement that it “sends a powerful message to Israelis and Jews across the Diaspora about the permanent value of Jewish pluralism and about what we can do when we work together.”

Rabbi Shmuel Rabinowitz, rabbi of the Western Wall and Holy Sites, said that he received the decision to approve the agreement “with a heavy heart and a sigh of relief.”

“Ever since the fringe and vociferous group of ‘Women of the Wall’ started its mass-media activity, the Western Wall went from being a unifying site to one of incessant quarrels. The chilul Hashem (defamation of G-d’s name) that this group and its supporters have caused is terrible, and it will take years to repair it,” he said. He added: “We must do everything to put this terrible chapter behind us.”

But not everyone lauded the deal. Haredi Orthodox Israeli lawmaker Moshe Gafni, who chairs the powerful Knesset Finance Committee, said he would not recognize the decision.

“Reform Jews are a group of clowns who stab the holy Torah,” Gafni said, according to Walla news. “There will never, ever be recognition for this group of clowns, not at the wall and not anywhere else.”**