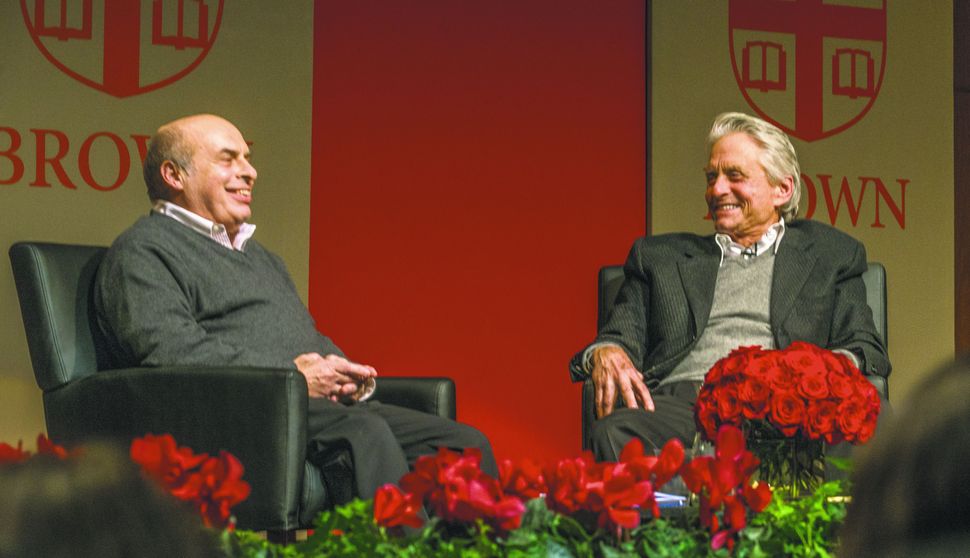 With a mother who wasn’t Jewish, along with his two non-Jewish wives, actor Michael Douglas’s newest part as a Jewish role model sounds at first like a case of nontraditional casting — or a serious case of chutzpah.

Appearing onstage in dialogue with Sharansky at Brown University here in Providence, at Stanford University in Palo Alto, California, and at the University of California at Santa Barbara posed a new kind of challenge for the man who played Gordon “Greed Is Good” Gekko in “Wall Street” and Jack T. Colton in “Romancing the Stone.” All three campuses, like many others in the United States, have experienced controversies involving Israel in recent years. At UCSB, student government proposals urging the university to boycott, divest from and sanction Israel were raised and defeated three years in a row.

The tour was sponsored and funded by Genesis and Hillel International, the on-campus Jewish organization, which has been both assailed and hailed in recent years for its insistence that groups backing BDS, as the Israel boycott movement is known, be barred from sponsoring events at Hillel centers, along with groups that reject Israel’s legitimacy as a Jewish state. The appearances by Douglas and Sharansky were billed as nonpolitical, but that did not stop protests by critics of Israel, who viewed them as an effort to boost the image of the Jewish state.

At Brown, about 20 protesters from Students for a Free Palestine and from other groups held signs and chanted for more than an hour in the lobby of the building where the event was held.

Sharansky spoke to some protesters before the event, who were chanting “Free, free Palestine” and holding signs with messages such as, “Criticizing apartheid is not anti-Semitism” and “Equal rights for Palestine.” Sharansky said later, from the stage: “They don’t want to talk. They want to shout. It’s not about human rights, they want to destroy the State of Israel.”

Despite the protests, the program got good reviews, though most of the audience were not the intended target.

At Brown, Jewish students made up only about a quarter of the 500 who came January 28, with the rest from the Providence community. At the Stanford event, held February 2, students were also a minority. At UCSB, from which Douglas graduated in 1968, a 300-seat auditorium was expected to be filled with about 100 Jewish students on February 3, with the rest coming from the broader community as the Forward went to press. Tickets for students were free at all three schools.

Douglas, who was never much identified with Judaism, received the Genesis Prize in January 2015 in a choice that some thought inspired but that left others at the time scratching their heads. But when Sharansky, who chaired the Genesis selection panel, met Douglas, the two men found that they shared an interest in encouraging a proud sense of identity among college-aged Jews, Hillel officials said. And from this, the idea for the tour was born.

In his introduction to the pair’s appearance at Brown, Hillel International’s president and CEO, Eric Fingerhut, stressed the nonpolitical. “Tonight is about Jewish journeys and people who have connected with Judaism in different ways,” he said. Fingerhut referred to the week’s Torah portion, which included the Ten Commandments, and cited the rabbinic teaching that all Jews past and present stood at the foot of Mount Sinai then. “We know that Michael Douglas and Natan Sharansky met at the foot of Mount Sinai, but their paths from there have been remarkably different,” he said.

Douglas then sat in conversation with Sharansky, talking with him about their respective personal Jewish lives, but also about Israel issues. Though Douglas generally kept his comments noncontroversial, when it came to the topic of Israel’s Jewish settlements in the occupied West Bank, he said: “This has been the one issue that has alienated more of Israel’s friends than any other.”

During the question-and-answer session at Brown, many queries came from students who were respectful but sharply critical of Israel. Among other things, they charged that Sharansky’s Jewish Agency was actively encouraging the expansion of the settlements, which are considered illegal by the international community.

One of those questioners, Samuel Hainbach, told Sharansky he was a supporter of the Jewish community and Israel, “but I have no love for the occupation.”

Sharansky denied that The Jewish Agency was encouraging the settlements — an answer contradicted, at least in the past, by the government’s own 2005 report on illegal settlement activity. It was also an answer that did not fully satisfy Hainbach, a sophomore from Chevy Chase, Maryland. Still, Hainbach said he appreciated the chance to talk to Sharansky and to have issues aired publicly. “I thought it was an impressive event,” he said.

Hainbach said he knew little about Douglas going into the program, and came out thinking that “he had an interesting story about how he reconnected with Judaism.”

Another attendee, sophomore Benjamin Gladstone of Brookline, Massachusetts, hadn’t known much about Douglas before the evening; he had never seen any of his movies. Sharansky was the draw for him as both a historical figure and an Israeli leader.

But Gladstone came out impressed by Douglas, too. “I really appreciated Michael Douglas liberalizing Jewish identity,” said Gladstone, who added that he was pleased to hear Douglas offer some challenge to Israel’s settlement policy.

Onstage, Douglas said he spent much of his life with no connection to Judaism. He said his father, born Issur Danielovitch and now 99, had an Orthodox childhood but then fell away from Judaism and married someone who was not Jewish. Douglas said he got the message growing up that he wasn’t Jewish because his mother was not, and he had only occasional brushes with Judaism.

“Religion was not a part of my life,” Douglas said, and this was the case until he married actress Catherine Zeta-Jones in 2000[. (An earlier marriage was also to a non-Jew.) Douglas said that their son, Dylan, independently developed an interest in Judaism.

Dylan asked to have a bar mitzvah and “brought a spirituality to our family,” Douglas said. After holding a bar mitzvah for Dylan in New York, he related, the family traveled to Israel together to continue the celebration.

Douglas said he was surprised when the Genesis Foundation called to tell him that he would receive the prize and felt unworthy at first. But then, he embraced the award. “It was a cathartic moment for me,” he said. “I didn’t realize how much I want to be accepted. I’m secular. I am just happy to be part of the tribe. Jewish values are a beautiful way to conduct your life.”

Some had questioned whether Douglas and Sharansky would be effective presenters to college students because of generation and culture gaps. Marshall Einhorn, executive director of Brown RISD Hillel, said the buzz among those who attended the program was favorable. Einhorn and Hillel officials at other schools involved in the tour said they were satisfied with the number of students in the audiences, even though most who attended the gatherings were older members from the general community.

Douglas, who received the $1 million Genesis Prize and then another $1 million when a philanthropist matched the money, is giving away the cash to support work promoting the inclusion of intermarried families in Jewish life.

The award money, he said, “has encouraged me to deepen my commitment and belief that we must all be more inclusive in order that the Jewish faith and culture thrive.” The money is being split between projects being developed by Hillel and the Jewish Funders Network Matching Grant Initiative.

One of the Hillel initiatives being funded by Douglas is a Facebook page project](An earlier marriage was also to a non-Jew.) titled “Jews of the University.” The project represents a global expansion of the “Jews of Brown” Facebook page, which allows students to talk about their Jewish identities and connections.

“There is not one definition of what being Jewish means,” said Rebecca Carol, the Brown 2015 graduate who created the Jews of Brown project. The project includes interviews with more than 200 students and is ongoing.