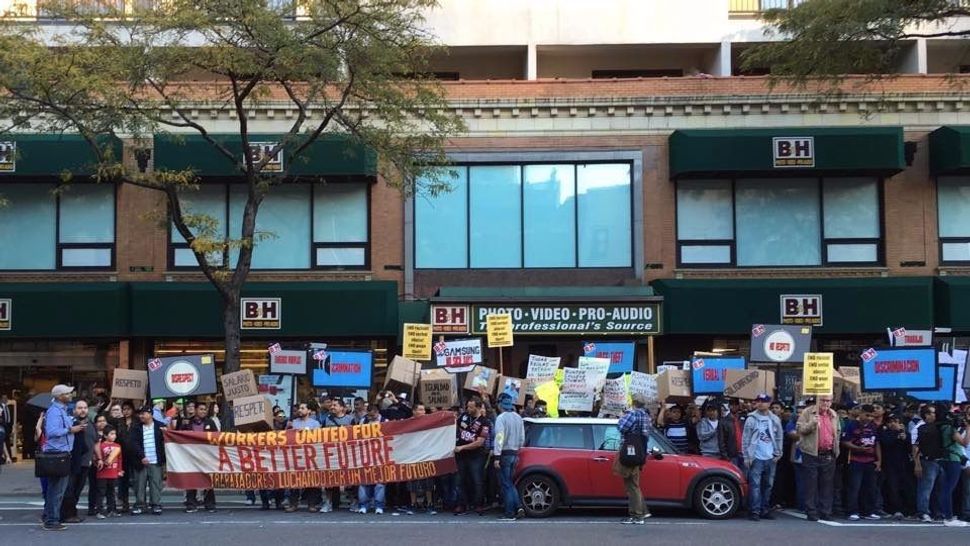 Hispanic workers at the company’s Brooklyn warehouse are forced to use dirty, often broken restrooms, while white workers have access to “superior” toilets, according to the complaint U.S. Department of Labor investigators filed February 24 with the DOL’s Office of Administrative Law Judges.

At the Brooklyn Navy Yard warehouse, DOL investigators charge, supervisors and managers are all white men, while entry-level workers are all Hispanic. Women, blacks, and Asians are never hired, and Hispanics are rarely promoted, and are underpaid compared to their white colleagues.

Workers at the same warehouse voted in November to join the United Steelworkers union, alleging that the company was subjecting them to unsafe working conditions and unfair hours.

B&H, known for its massive Manhattan camera store, is owned by Herman Schreiber, a member of the Satmar Hasidic community. The store’s staff is heavily ultra-Orthodox, and it is known for providing employment to ultra-Orthodox men from across the New York area.

A spokesman for B&H declined to comment. “Because this is an ongoing unresolved legal matter we are not able to reply at this time,” said Henry Posner, B&H’s director of corporate communications, in an email to the Forward.

The complaint charges that B&H violated an executive order barring federal contractors from employment discrimination based on race, color, sex, or national origin. It asks for retribution for affected workers, including repayment of lost wages, salary changes, and promotions. If the court sides with the investigators, and if B&H does not comply, it could lose what the government says is $46 million in federal contracts.

“Federal contractors’ workforces should reflect the diversity of the American people,” said Patricia Shiu, director of the U.S. Department of Labor’s Office of Federal Contract Compliance Programs, which brought the suit, in a statement. “B&H fell far short of this responsibility and created deplorable working conditions for employees at its Brooklyn warehouse.”

According to the complaint, B&H hired 101 people to work as entry-level laborers at its Brooklyn Navy Yard warehouse between January 2011 and January 2013. All were Hispanic men; none were black or Asian. Those Hispanic workers earn “significantly less” than white workers with the same job. They are promoted to higher-level positions at far lower rates than white workers.

It is not clear from the complaint whether those white laborers are ultra-Orthodox.

The complaint also charges that Hispanic workers were verbally abused because of their national origin.