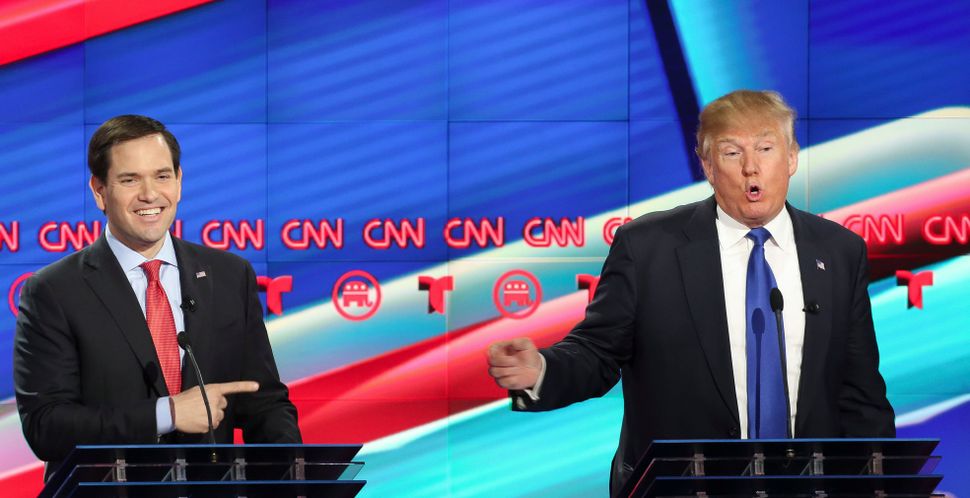 After appearing only as an extra in the nine previous engagements, Israel took center stage at the Republican debate Houston on Thursday night.

Cast for the first time in a leading role, Israel served as a litmus test to ascertain the devotion of the GOP candidates to cherished conservative principles but mainly as a baseball bat with which Ted Cruz and Marco Rubio repeatedly hammered Donald Trump for his Israel-apostasy.

Cruz has already filled the role of snarling bulldog, but Rubio had to undergo a true metamorphosis to transform himself from cute pussycat to roaring lion. The two U.S. senators functioned as a tag team of wrestlers, with Rubio smacking Trump early in the debate and Cruz bashing him towards the end: In the soap opera known as WWE, they might have dubbed the Cuban Crushers. They whipped out scandals and controversies from Trump’s past, mocked him for his role in the Apprentice, insulted and ridiculed him incessantly so that at certain moments it seemed as if Trump was losing his cool and the Teflon might finally be cracking.

One should always remember, however, that where Trump is concerned, your eyes and ears and years of experience can’t be trusted, and what seems to be a crushing blow to Trump can very well turn out to be a coup de grace to his rivals.

Rubio’s evolution from innocuous geek to a cold-blooded tormentor who could have found work in the basements of the CIA was nothing less than miraculous, but it does raise the question of why only now, five days before the decisive battles of Super Tuesday, and whether the onslaught won’t turn out to be too little too late. The polls show Trump with confident leads in a dozen of the states taking part in next Tuesday’s ballots and trailing Cruz by only single digits in his home state of Texas. If Trump sweeps them all, and even more so if he manages to take Texas as well, Thursday’s extraordinary slugfest will soon be forgotten.

The debate escalated at several points to a cacophony of shouting which upset many Americans but seemed par for the course for Israelis, who see much worse on their talk shows on a weekly basis. Trump called Cruz “a liar” and Rubio a “choke artist” but this time he got as good as he gave, and more so.

The dynamic duo raised various controversies and scandals from Trump’s past, accused him of crimes and misdemeanors and fraud and conspiracies and tax evasion and even slammed him for insisting that, notwithstanding his intention of revoking ObamaCare, he would not allow people to die in the streets if he was president. Judging by their scorn, it seems that Presidents Cruz and President Rubio would insist that people keep on dying in the streets just like before, because otherwise how will they ever learn their lesson.

A similar logic prevailed in their assault on Trump concerning Israel, which was fueled by his previous statement that he would remain “neutral” in order to try and broker a peace agreement between Israel and the Palestinians, which he now described only as “Israel’s neighbors.” They accused Trump of turning his back on Israel and were no less outraged at his peculiar insistence that “peace” should be pursued. Their concerted attack would have been rewarded with loud applause in the right wing flanks of the Likud and Jewish Home party. It places the two senators somewhere to the right of Benjamin Netanyahu and perhaps Naftali Bennett and Avigdor Lieberman. And it was slightly awkward for anyone who stands to their left.

Trump responded by declaring that he was “totally loyal” to Israel, blasting President Obama as the “most horrible President in history” for Israel, citing his march at the head of the Salute Israel Parade in Manhattan and even dusting off his Tree for Life citation from the Jewish National Fund. To his credit, however, Trump, who strangely seemed at times to be the only responsible adult on the podium, stuck to his guns. “As President, there’s nothing that I would rather do to bring peace to Israel and its neighbors generally, “he said. “And I think it serves no purpose to say that you have a good guy and a bad guy.”

Cruz lambasted Trump’s “neutrality” and linked to it “the left buying into this moral relativism that is often pitched in the media.” He blasted Trump for not rising up in Israel’s defense and touted his own courage in standing up for the Jewish State “when the heat was on.” Judging by his tone it sounded as if Cruz was about to portray his grueling tank battles in the Sinai in the Yom Kippur War or his skirmishes in the dark Hamas tunnels in Gaza, but it turns out that he was only referring to his call for the U.S. to resume flights to Israel, which had been suspended for a day or two during the 2014 Gaza War. Profiles in Courage indeed.

Cruz, who possibly has only had time to catch up on the history of U.S.-Israeli relations over the past few years, also lambasted Trump for supporting the 2004 presidential run of John Kerry, “the most anti-Israel Secretary of State in history.” It takes a special combination of arrogance and ignorance to describe Kerry as such, when he is in the company of Secretaries of State such as George Marshall, John Foster Dulles, William Rogers and many others. Even if one thinks that Kerry does not have Israel’s best interests at heart, which he does, it’s hard to rank him even among the top ten most anti-Israeli Secretaries of State ever.

Rubio described Trump’s neutrality as “anti-Israel,” mocked him by saying that a peace agreement “isn’t the same as real estate deal” and summed up the Palestinian situation thus: “Here’s what they do. They teach their four- year-old children that killing Jews is a glorious thing.” Peace, shmeace, he noted, was out of the question. If he ever lets go of his day job, the Government Press Office or the Samaria Settlers Council could surely use Rubio’s talents.

John Kasich made do with a short oath of allegiance to Israel and moved on from there to other topics, but Zen Master Ben Carson said that Israel was like America’s child. In the company of other children one tries not to show too much favoritism but family ties are bound to come through in the end. Later he went on to quote Hillel the Elder, “If not now when” and one hopes that he doesn’t leave the race too soon because what would we do without his calming effect and comic relief.

In any case, after all that it’s much easier to understand why Sheldon Adelson is finding it so hard to make up his mind.