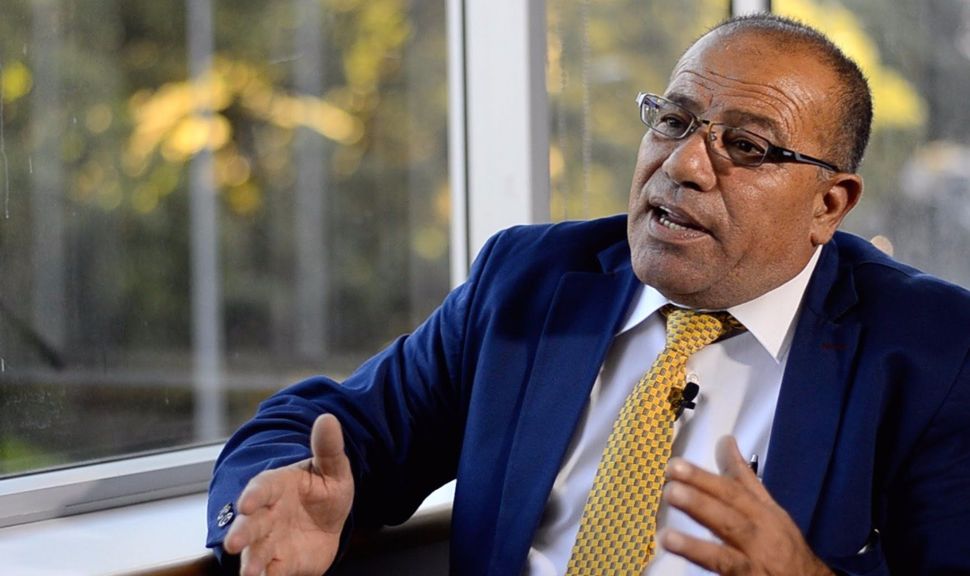 A Palestinian human rights activist’s tour of Chicago-area college campuses ended on a sour note this week, after he was heckled and threatened by students and anti-Israel protestors.

Bassem Eid, an East Jerusalem Palestinian who is the founder and director the Palestinian Human Rights Monitoring Group, cancelled his planned lecture at Northwestern University Hillel after experiencing unpleasant encounters with protestors at previous events he held at the University of Chicago and DePaul University that week.

Eid’s February 19 talk at the University of Chicago quickly turned contentious as members of the audience took issue with Eid’s opposition to boycotting Israel and with his focus on wrongdoings of the Palestinian Authority, not of Israel.

Eid was among the first researchers working with B’tselem, the Israeli group that documents human rights abuses in the occupied territories. In 1992 he was awarded the annual human rights award by the Association for Civil Rights in Israel, even as many Israelis on the right criticized him.

B’tselem focuses primarily, but not exclusively on human rights violations committed against Palestinians by the Israeli government and by Jewish settlers in the occupied West Bank. But Eid increasingly concentrated his work on torture and murders carried out by Palestinians against Palestinians. He eventually left B’tselem to start his own organization, the Palestinian Human Rights Monitoring Group, and has since been an outspoken critic of Hamas, an organization he accused of war crimes, and of the Palestinian Authority’s security apparatus.

Now, Eid finds himself a target of criticism from his fellow Palestinians. Word of the tense events at the University of Chicago and, the next day at DePaul, led organizers of Eid’s third planned talk, at Northwestern, to preemptively move the event into the Hillel building in order to ensure that only students carrying college ID could attend the event. But when Eid arrived, he noticed several of the hecklers from the previous events waiting to enter. After verbally engaging with them, he consulted with organizers and decided to cancel the talk. Eid said there was not sufficient security at the event to ensure he could carry out his talk safely. “I’m used to these things,” Eid told the Forward in a February 26 phone interview, “I’ve seen worse when I spoke in South Africa.” He said that as long as there is sufficient security to keep what he called “BDS thugs” in check, he’d be willing to talk anywhere, using an acronym for the movement to boycott, divest from and sanction Israel. “The whole idea of BDS is not to let you talk.”

It is not clear whether the hecklers were supporters of BDS or associated with any pro-BDS organization. “To me, it speaks to an unfortunate environment where you have serial protestors who make speakers feel unsafe,” said Michael Simon, director of Hillel at Northwestern.

Eid’s presentation, with its shift away from the Israeli occupation, also disturbed the dovish Israeli lobby, J Street.

J StreetU, the group’s campus organization, initially agreed to co-sponsor Eid’s lecture at Northwestern. But after hearing from students who attended his talk at the University of Chicago, the group withdrew its co-sponsorship. “We found some of the things he said troubling and not in line with our core values,” said Jacqueline Soria, co-president of Northwestern J StreetU. She noted Eid’s comment that Americans do not have a role in solving the Israeli – Palestinian conflict, which runs counter to J Street’s agenda of encouraging U.S. government involvement. Eid, she said, also “spoke exclusively about Palestinian responsibility” without talking Israel’s role.

Despite withdrawing their sponsorship, J StreetU still called on its members to attend the Northwestern event, which eventually was canceled.

Eid vowed to keep spreading his message despite the unwelcoming response he met with at some of the campus events. “This is very important for me, because I want to expose all the mistakes we the Palestinians have done in this conflict,” he said. “If we won’t solve our problems, this will ruin our lives for generations to come.”