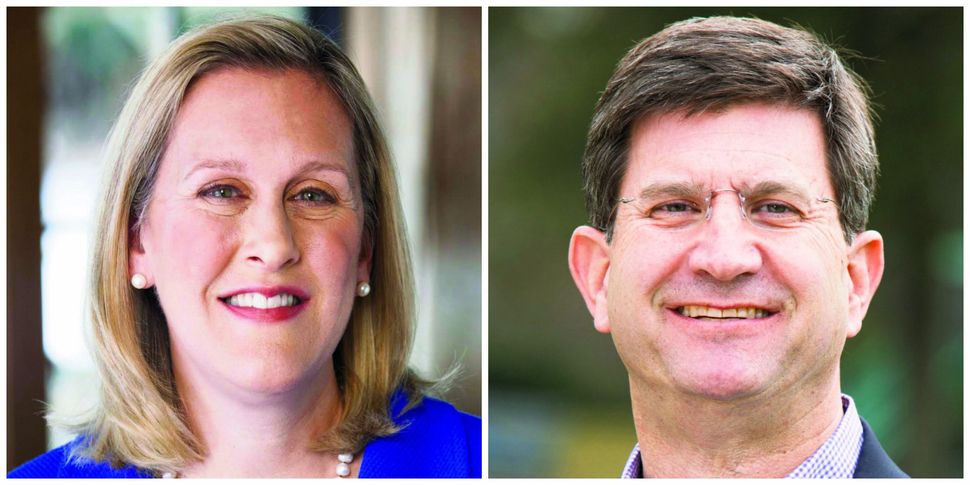 The aftershocks of the Iran nuclear deal, which tore the American Jewish community in two last summer, still ripple politically amid the tranquil, willow-lined boulevards of Chicago’s upscale northwest suburbs.

Two Jewish candidates for Congress with almost identical political profiles — except for their positions on the Iran deal — are running against each other in the March 15 Democratic primary in Illinois’s strongly Jewish 10th Congressional District. And though Brad Schneider and Nancy Rotering are not using the opposing stands they took on the Iran deal against each other, the contrast is playing out powerfully among their supporters.

“The differences between Rotering and Schneider over the Iran nuclear deal have surfaced as the main issue between the two Democrats,” wrote Lynn Sweet, the Chicago Sun Times’ longtime Washington bureau chief last September,

The primacy of the matter came to the fore most notably when Abner Mikva, a former federal appeals judge, revered Chicago liberal icon and one-time member of Congress representing the same 10th Congressional District, abruptly switched his endorsement from Schneider to Rotering in September. In doing so, Mikva explicitly cited Schneider’s opposition to the Iran deal and Rotering’s support for it.

”When you first asked for my support, you assured me that you would not be dominated by AIPAC’s and [Israeli Prime Minister] Benjamin Netanyahu’s view on Iran,” Mikva wrote in an open letter, referring to the American Israel Public Affairs Committee, the Washington-based Israel lobby. “I signed on to your campaign in good faith, but have since been compelled to reconsider.”

Representative Jan Schakowsky, who represents the district south of the 10th, was a strong Schneider supporter two years ago, when he made a previous run for Congress. Schakowsky’s name was on an initial list of Schneider supporters for this run, too, but she quietly removed her name from the roster after Schneider announced his opposition to the Iran deal last fall. Asked if Schneider’s opposition to the deal was the reason, a spokesperson for Schakowsky declined to comment.

Rotering is also endorsed by Illinois Senator Dick Durbin, who provides the narration for and appears on camera in the Rotering TV commercial now running in heavy rotation throughout the district. He cites her support for the Iran deal as one of his main reasons for backing her.

Schneider’s endorsement list includes a long list of local, state and federal officeholders, including Congressional Minority Leader Nancy Pelosi of California and Representative Steny Hoyer of Maryland, the House’s second-ranking Democrat. Notably, their support for him comes despite the fact that both supported the Iran deal.

He also collected endorsements from JACPAC, a pro-Israel political action committee that also stresses support for abortion rights and separation between religion and state, and the National Jewish Democratic Council.

A small business consultant and lifelong AIPAC member, Schneider served a single term in Congress from 2013 to 2015, but was then defeated by the incumbent, Bob Dold, a moderate Republican. Rotering is mayor of Highland Park, one of the centers of Jewish culture in the district, and a member of both J Street, the dovish Israel lobby, and AIPAC. She also touts her membership in Hadassah, the National Council of Jewish Women and JACPAC, where she served on the steering committee. Both candidates are 54.

“I had a lot of concerns and you can’t trust Iran,” said Rotering, in an interview with the Forward. “But when you boiled it down, the options were nothing without the deal or an ability to extend Iran’s breakout time — which has already begun to happen — while monitoring what they’re doing.”

Schneider who, unlike some more hard-line Republicans, does not advocate tearing up the deal now and renegotiating a new one, said, “There’s no disagreement that the physics of the deal were sound, that it blocks Iran’s pathway to a plutonium weapon. I was concerned about gaps that I think make it difficult for [international monitors] to police and enforce the deal, and it doesn’t address Iran’s access to next-generation centrifuges and a heavy water reactor 15 years from now.”

The 10th Congressional District’s Jewish population is estimated to be about 11% to 12%, but Jewish voter turnout is typically much higher, anywhere from 15% to 20% of the electorate, according to longtime Jewish activists.

“The Democratic vote index in the district is generally more than 55%,” said Lauren Beth Gash, a Democratic State Central Committee representative from the 10th district and former state legislator. “A Democrat should hold this seat.”

Schneider finds it difficult to identify an issue besides the Iran deal on which he and Rotering disagree. Both endorse Hillary Clinton for president, support Democratic economic growth models and environmental policies and are solidly in favor of women’s reproductive rights.

Gun control is a high priority for both candidates. Rotering spearheaded Highland Park’s assault weapon ban, which made national news when the Supreme Court declined to consider a challenge to it last December. Schneider was named after a relative who was killed by a gunman, and the first speech he delivered in Congress was on gun control.

Still, Schneider may have crossed some important lines in some Democrats’ minds. He lost the support of several Democratic community groups when they discovered he had contributed to the House campaigns of Republican Mark Kirk, who is now a senator, but used to represent the 10th. Though he wasn’t in office when Netanyahu spoke to Congress in March 2015, Schneider found his way to the House floor for the speech, which was orchestrated — to protest from Democrats — by the House’s GOP leadership in violation of long-standing protocol that calls for the White House’s involvement in arranging such an address.

At least through late February, both campaigns have been careful not to publicly demonize the other, which could disable the primary victor in the general election against Dold. Schneider doesn’t question Rotering’s pro-Israel bona fides, and she declines to question his desire for diplomatic solutions to the various Middle East puzzles.

No public polling is available. The winner will likely be determined by which candidate is more successful at getting supporters to the polls.