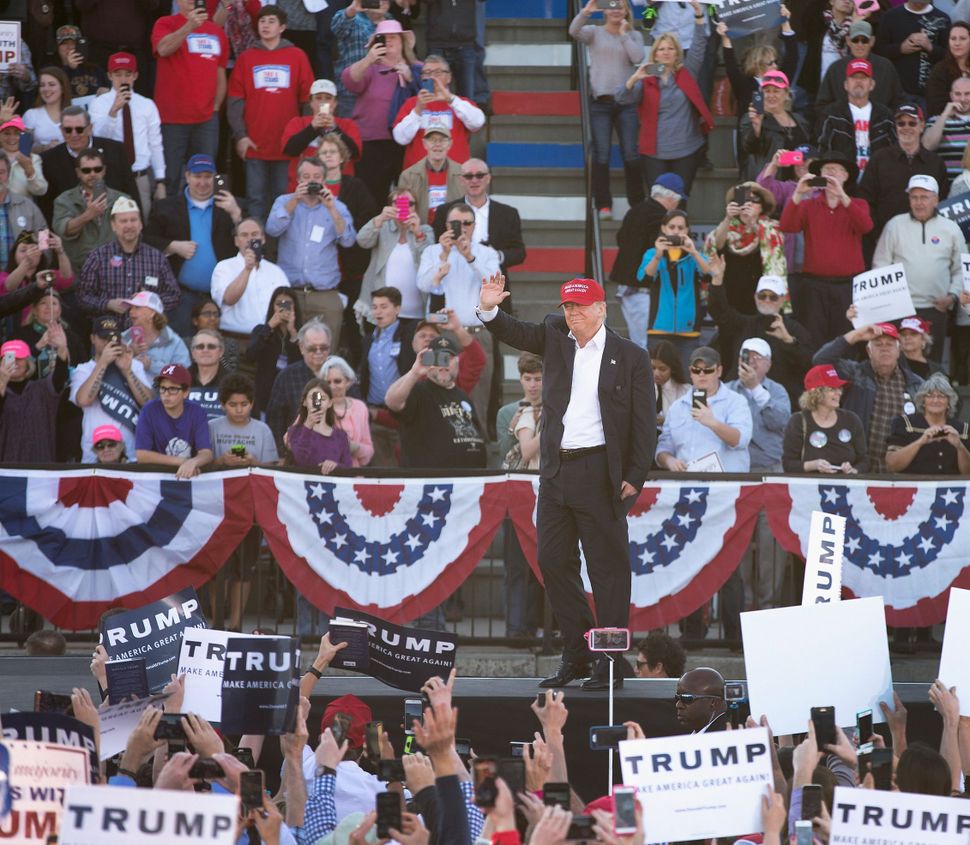 As Donald Trump’s campaign surges to front-runner status on shock value in America, his bombast is familiar to a certain type of Israeli.

“He’s a no-bullshitter,” said Doron Mizrachi, owner of a South Tel Aviv restaurant that sells bourekas, or Middle Eastern puff pastries. Mizrachi concedes that customers in this left-wing neighborhood sometimes bristle at his unabashedly right-wing politics: “I’m like Donald Trump,” he explained. “I say the facts.”

Trump’s bluster may, in fact, often obscure his shifting and hard-to-pin-down stances on many issues, like whether he welcomed or disavowed the support of Ku Klux Klan grand wizard David Duke. But this dedication to perceived “straight talk” is embedded in mainstream Israeli Jewish culture.

There is even a name for it. Israelis pride themselves on speaking dugri. Adopted into Hebrew from Arabic, the term means to speak bluntly, even if it comes at the expense of the listener’s feelings. (In Arabic the word connotes truthfulness.)

Trump’s style is also one of “dugri,” said Yaron Ezrahi, a professor emeritus of political science at The Hebrew University of Jerusalem. The Republican candidate’s campaign, built on the politics of the impolitic, like his rants against Mexicans and Muslims, appeals to fed up Americans. His popularity rests in part on the perception that he is willing to say what other politicians won’t.

“People in America are tired of this bullshit political correctness,” said Yosef Kayman, a real estate broker in Tel Aviv, one of many Israelis who are watching the spectacle of Trump’s campaign with something like approval. 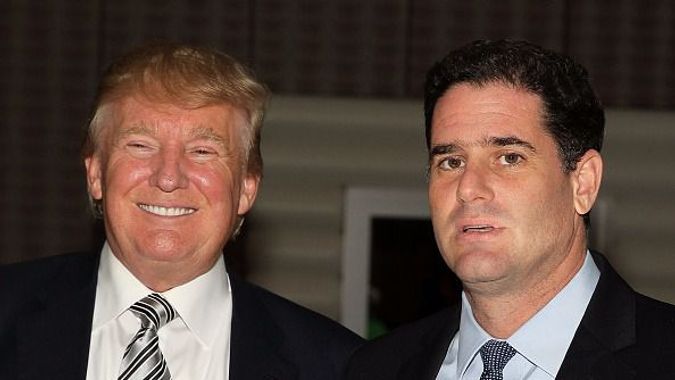 “This is the problem with Trump,” Ezrahi said. “He is speaking aggressively and too many Americans understand it as sincerity.”

Though Israelis might understand Trump’s style, it doesn’t mean that they agree with him. An Israeli opinion poll by the Rafi Smith Polling Institute, released in early February, indicated that 14% of respondents support Trump while 41% back Hillary Clinton.

A fuller picture of Israeli opinion has yet to emerge — most Israeli pollsters conduct their surveys after the primary election. But anecdotal evidence suggests that Israelis don’t know what to make of Trump. This unfamiliarity has bred fascination with the candidate. According to Eytan Gilboa, a scholar of U.S.-Israel relations at Bar-Ilan University, Trump dominates the Israel news media’s vigorous coverage of the U.S. election. In contrast to Clinton — whom Israelis know well from her days as first lady and then secretary of state — Trump is exotic, a topic of countless op-eds in the Hebrew press.

“Israelis are puzzled by him,” said Uri Dromi, a former Yitzhak Rabin spokesman and the head of the Jerusalem Press Club. According to Dromi, Trump obliterates two important stereotypes that Israelis hold about American presidential hopefuls: that they are bred in the American political system, and that they are famously politically correct. Given Trump’s popularity, Israelis are grappling with what his candidacy says about America.

“This is something that says there are deep undercurrents in America which we don’t understand,” Dromi said. “You know, people are so fed up with the system and by the government that they are willing to embrace either Donald Trump on the one hand or Bernie Sanders on the other hand,” he said, referring to the Vermont senator, a democratic socialist, running against Clinton. These two candidates, both outside the Washington political elite, are “rocking the boat,” said Dromi.

But if Israelis looked closely at Trump they would find a lot to dislike, said Gilboa. Trump’s scorn of immigrants and refugees harkens back to the closed borders against European Jews fleeing the Holocaust, he said. Trump also mocked Senator John McCain for having been a prisoner of war. By contrast, prisoners of war are considered heroes in Israeli culture, and Israel has paid dearly to release them from their captors, Gilboa said.

Though Trump has had a few high-profile political moments with the Israeli public — he stumped for Israeli Prime Minister Benjamin Netanyahu in a video ahead of the 2013 election — he is known to Israelis for his business background. A spinoff of Trump’s show “The Apprentice,” in which contestants audition to lead one of Trump’s companies, aired on Israeli television as “The Ambassador.” Trump has also made several overtures to invest in Israeli real estate. He planned a Trump Tower in the Tel Aviv suburb Ramat Gan that would have been the largest tower in Israel. But Trump ducked out of the project in 2007 when the site was sold to Azorim, a development and construction company.

The mayor of Netanya, Miriam Feirberg-Ikar, also courted Trump to build a luxury hotel on the city’s seafront. Michael Dezer, an Israeli developer in New York, flew to Israel twice to scope out the property, the mayor said. She recounted that Dezer introduced her to Trump at a party in Palm Beach, Florida, and that Trump said he would be “happy” to build his first project in Israel. Though the deal was far from inked, Feirberg-Ikar widely promoted the plan in the Israeli press as suicide bombers hit the city in the early 2000s, during the second intifada. “We are praying that Trump will have the honor of saving Netanya,” she said, according to the Israel Today website. In the end, the mayor said, the landowner sold the property to someone else.

The fact that Trump is a relatively unfamiliar candidate to Israelis also poses a dilemma for Netanyahu. With the Republican field in an uproar over Trump’s unexpected success as a populist crusader, Netanyahu, like his wealthy American supporter, Sheldon Adelson, is unclear about whom to throw his weight behind. The prime minister has been known to assiduously court Republican candidates. When Mitt Romney visited Israel during his 2012 presidential race against Barack Obama, Netanyahu’s effusive welcome for the candidate sparked charges that he was effectively endorsing him.

Trump himself has sparked widespread concern among prominent Republican Jews for stating that he would be “neutral” in his approach to mediating between Israel and the Palestinians, even as he has declared himself a strong supporter of Israel.

Nevertheless, some on Israel’s political right find Trump a palatable option, Ezrahi said, and can even posit how a Trump presidency could improve Israel’s standing in the West by comparison. After all, the Israeli political landscape is full of figures known for their Trump-style brazenness, such as Likud ministers Miri Regev, who called asylum seekers from Eritrea and Sudan a “cancer,” and Ayelet Shaked, who posted an article on her Facebook page referring to Palestinian children as “little snakes.”

“If America elects a person who advocates discrimination and condescension and even resentment toward minorities, maybe we won’t be so criticized by the West,” Ezrahi said, explaining right wing thinking on Trump.

Writing in Yediot Aharonot, columnist Nahum Barnea compared Trump to Oren Hazan, a Likud lawmaker accused of dabbling in prostitution, gambling and hard drugs. “He is a rude, quick-tempered man who is addicted to the noise he manufactures as if it were a drug,” Barnea wrote.

It’s a comparison that Hazan has apparently embraced. In an interview with the anti-Zionist website Mondoweiss, Hazan said he believes that Trump is supportive of the politically explosive issue of Jewish prayer on the Temple Mount, a Muslim holy site currently off limits to Jewish worship. “I don’t know why, but I trust him,” Hazan said. Referring to himself, Hazan boasted, “People tell me a lot that Trump is the American version of Oren.”