Even though Peter Jaffe had never been to Israel, the Maryland lawyer felt a kinship with the people there, imagining a nation state full of “New York Jews.” That changed as soon as he set foot in the Holy Land.

“After I was there, I found out that we’re much less similar,” he said.

It’s not uncommon for American Jews to visit Israel only to find that their notion of the Jewish state is completely upended. Life in the diaspora and life inside Israel have forged two very different types of Jews. And those huge differences are now quantifiable, thanks to a study from the Pew Research Center, released on March 8.

That study compares new findings on Israelis with a survey on American Jewish identity that Pew conducted in 2013.

Among the key findings are that Israelis are, very broadly speaking, more religious, more right wing, less educated and more pessimistic about the chances for peace with their Palestinian neighbors. Unsurprisingly, given their Jewish majority state, they tend to socialize with and marry other Jews. American Jews, on the other hand are, in general, more secular, more liberal, better educated and more hopeful about peace. They are much more likely to socialize with and marry non-Jews.

Steven M. Cohen, a research professor of Jewish social policy at Hebrew Union College-Jewish Institute of Religion, in New York, and an adviser on the Pew study, said that the differences, especially the political ones, come down to context. 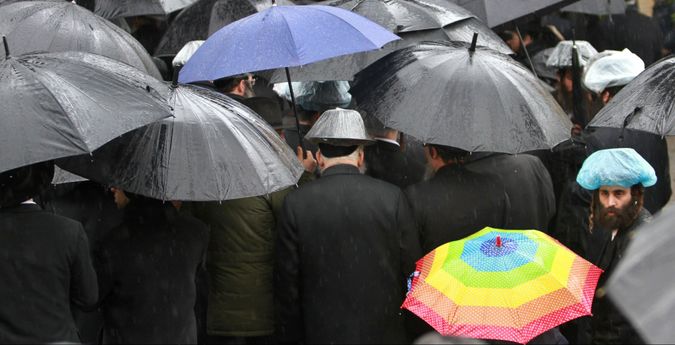 Pew, which conducted its new Israeli survey via in-person interviews between October 2014 and May 2015, polled 5,601 Israeli adults over the age of 18, including 3,789 Israeli Jews. The margin of error for questions directed exclusively to Israeli Jews is plus or minus 2.9%.

These questions included several about religion, and the results show that Israelis are on the whole more devout than Americans. About one in five Israelis is Orthodox; 9% identify as Haredi, or ultra-Orthodox and 13% are Dati, meaning simply Orthodox.

Among American Jews, one in 10 is Orthodox; 6% identify as Haredi and 3% are Modern Orthodox, an identity similar to Dati in Israel.

When it comes to non-Orthodox Judaism, most American Jews affiliate through institutional streams, such as Reform and Conservative Judaism, or none at all, and many live secular lifestyles. Israelis, the Pew study found, see themselves as members of one of four distinct tribes: in addition to Dati’im and Haredim, there are Hilonim, or secular Jews, and Masortim, or traditional Jews. These identities immerse the members of each group in vastly different, largely separate universes. 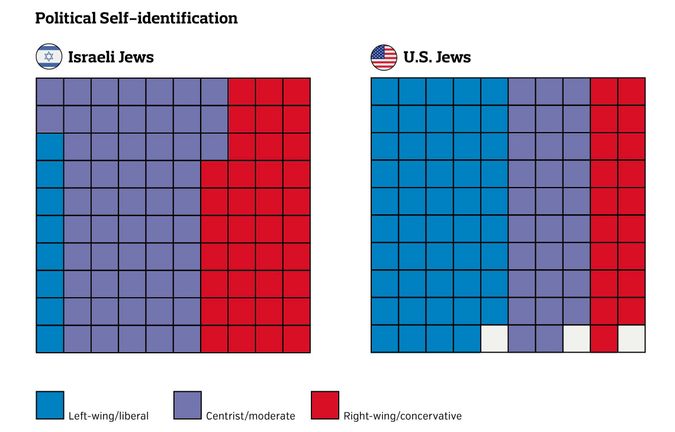 “What happens is people find their people,” said Chava Moscovits, who lives in the exclusively Orthodox settlement of Beit El. “People tend to want to be near the people that resemble themselves.”

Israeli Jews are also more likely to engage in religious rituals than U.S. Jews are, even when they identify as secular. A third of Hilonim keep kosher, for instance, while just 22% of American Jews overall do this. At the same time, Hilonim look much less religious in other aspects. Just 2% say religion is important in their lives, and 60% say they never go to synagogue. “Virtually all Jewish subgroups in the U.S. are more religious than Hilonim by these measures,” the report noted.

Eran Raviv, a 39-year-old program director at an Israeli not-for-profit group, identifies as secular. He’s not sure he believes in God, and he goes to synagogue four times a year, typically when he is spending the weekend with an Orthodox friend. Yet he marks the Sabbath with a Kiddush, or ritual prayer over wine and food before dinner. “I could say that I’m not practicing almost all the mitzvahs” — that is, Jewish commandments — “but I do have a strong relationship to Judaism,” Raviv said.

Part of the reason, the study suggests, that Israeli Jews — even Hilonim, by some standards — are more traditionally observant is the simple fact that Judaism permeates civic life in Israel. Grocery stores and public transportation close down on the Sabbath, most food is kosher and Jewish holidays are national holidays. American Jews must go out of their way to be observant, by contrast.

When it comes to politics, Israeli Jews and Americans are also very different from each other, especially regarding the most controversial issues facing the Jewish state. In the 2013 Pew study, American Jews demonstrated more optimism about the chances for peace, with 61% saying that they believed a two-state solution to Israel’s conflict with the Palestinians could come to pass. Contrast that with just 43% of Israeli Jews who feel this way.

Israeli and American Jews also diverge in their attitudes toward Israel’s settlement enterprise on the Israeli-occupied West Bank. Forty-two percent of Israeli Jews say that the exclusively Jewish settlements, which the international community views as illegal, help Israeli security. That is a view shared by just 17% of American Jews.

Moscovitz, who identifies as Dati Leumi, or nationalist religious, says there is no doubt in her mind that settlements strengthen security. “Everywhere that Jews live is an entity of Jewish life,” she said, and Jewish life “gives security.”

Moscovitz also illustrates another Pew finding: that 52% of Israelis feel that the American government is not supportive enough of Israel, while 31% are satisfied with the level of the support. America “should support Israel no matter what,” Moscovitz said. “We should not be harassed into making agreements with Arabs.” In America, those numbers are roughly flipped; as of 2013, 31% of American Jews believed their government could support Israel more strongly, while 54% were satisfied with the level of support.

Gil Hasidim, a 39-year-old in Tel Aviv, went so far as to say that the gap between rich and poor must be bridged before the country can deal with the situation with the Palestinians. “The Palestinian problem is the second problem, in my opinion,” he said.

“It seems that Americans are looking at Israel through the security perspective and are either less exposed to or less aware of the economic burden on people,” said Tamar Hermann, an adviser on the study and an Israeli professor of political science at the Open University of Israel. American Jews don’t seem to get the “sense of frustration” on the part of young Israelis trying to gain an economic foothold in their country.

Another striking finding had to do with education levels. Fifty-eight percent of American Jews have a college degree, compared with 29% of Israeli Jews who do.

“American Jews are a tiny socioeconomic elite in America and in Israel they are the full spectrum of the population,” explained Alan Cooperman, director of religion research at Pew. “I think the difference between the majority population and the tiny minority population may be responsible for the difference of what it means to be Jewish in both countries.”

“I think it is very interesting that Israeli Jews and American Jews feel this connection, given the significant differences between the communities,” said Neha Sahgal, a senior researcher with Pew.

But Cohen warns that the differences between the two groups could have long-term consequences that warm feelings alone can’t change. “The conditions of the two communities are such that they are driving the two Jewish communities in two different directions,” he said. “This means there will be less of an automatic relationship and increasing difficulties to understand each other.”