48% of Israeli Jews Back ‘Expulsion’ or ‘Transfer’ of Arabs, New Pew Survey Says

Almost half of all Israeli Jews are in favor of transferring or expelling the state’s Arab population, a major U.S. survey of Israeli public opinion has found.

The Israelis polled were not responding to an Israeli government policy proposal, but rather the broad concept of transfer and expulsion. Forty-eight percent of Israeli Jews strongly agree or agree with the idea while 46% strongly disagree or disagree.

“[Jewish] Israelis are feeling, at the time we took this survey at least, quite divided about the long-term prospects for living together with the non-Jewish population,” said Alan Cooperman, director of religion research at Pew. According to the report, Jews constitute about 81% of the country’s population; non-Jews, the vast majority Arabs, constitute 19%. There are 8.4 million people living in Israel total.

Cooperman said the alarming data point should be taken in the context of other findings in the report, such as the fact that 45% of Israeli Jews say that a Palestinian state cannot exist alongside Israel, while 43% believe that one can.

In its question about expulsion or transfer, the survey did not specify whether the Arabs in question are Arab citizens of Israel or whether they include East Jerusalem residents and stateless West Bank and Gaza Palestinians. Palestinian residents of predominantly Arab East Jerusalem, which Israel won control of in the 1967 Six Day War, have been granted certain residency rights but have, by and large, rejected an offer of citizenship. The international community has also not recognized the state’s annexation of that sector of the city to Israel proper. Palestinian residents of the West Bank, which Israel also won control of in 1967, live under military occupation. The study did not look at whether the respondents consider Israel to include the territories it captured in the 1967 war; nor did it state or ask respondents to what territory Arabs should be transferred.

However, Tamar Hermann, a professor at The Open University of Israel who advised on the study, offered insight into how the question, which has been asked on other occasions, is likely to be understood in the context Israeli political culture.

Typically,Hermanns aid, Israelis understand the transfer of Arabs as applying to Arab citizens of Israel. The word “transfer” in this context means “forceful expulsion,” she said, “putting them on trucks and sending them away” across the Jordan River, to Jordan.

According to Cooperman, the study was not conducted during a particularly volatile time in Israel or the Palestinian territories. The polling, which was conducted in person, took place in a relatively “calm” period between the fall of 2014 and the spring of 2015. Researchers deliberately waited until after the 2014 Hamas-Israel war ended so that the immediate conflict would not bias their findings. The reporting also took place before the current spate of Palestinian stabbing attacks.

The transfer question, along with several other questions on the survey, was asked only of Israeli Jews. The margin of error for these questions was plus or minus 2.9%. For the broader survey, Pew researchers conducted 5,601 face-to-face interviews with Israeli adults over the age of 18 between October 2014 and May 2015. The sample for the broader survey included Jews, Muslims, Christians and Druze. East Jerusalem Palestinians were also included in the survey, but not Palestinians on the West Bank. The questions for Jews only were put to 3,789 Israeli Jews. 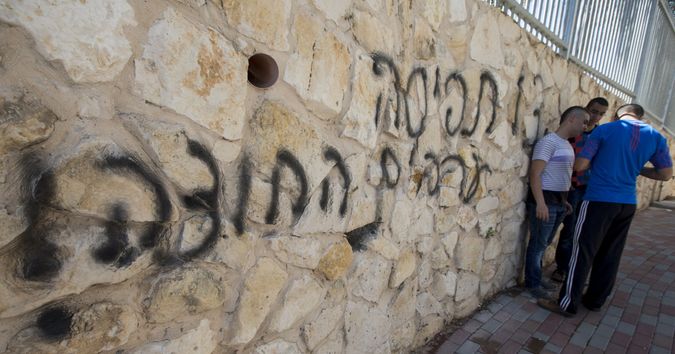 Graffiti in Hebrew calls for Arabs to be forced out of Israel. Image by Getty Images

Israeli opinion on transfer correlates with religious identity. Those who identify as “dati’im,” or Orthodox, tend to prefer transfer more than other groups. Seventy-one percent of dati’im agree that Arabs should be transferred or expelled from Israel. “Hilonim,” or secular Jews, feel differently, with 58% disagreeing with the idea. “But even among these self-described secular Israeli Jews,” the study noted, “about one-third (36%) favor the expulsion of Arabs from the country.”

It correlates with where the respondents live, but only to a degree. Settlers in the occupied West Bank, which includes land that Palestinians claim as part of a future state, favor transfer at about the same rate as Israelis who live inside Israel proper. The difference is that some of them feel more intensely about it; 27% of settlers strongly agree with transfer, compared to 20% of other Jews who strongly agree.

The topic has a long history in Israel, which is why it was included in the wide-ranging report. According to the research of historian Benny Morris, early Zionist leaders, including founding father David Ben-Gurion, advocated for the transfer of Palestinians from the Jewish state. In Israel’s founding war, some 700,000 Palestinians fled or were expelled by Jewish forces. But intense debate still seethes among historians on whether the exodus was due to a plan designed before or during the war by Zionist leaders, or whether it was an unintended result of the war. Government policy set soon afterward barred these Palestinians from returning.

More recently, Knesset Member Avigdor Lieberman raised the specter of a kind of transfer with his plan to swap Arab population centers inside Israel for Jewish settlements in the West Bank. His proposal did not entail the physical transfer of people, but would mean that Arab-Israeli citizens of Israel would be forcibly stripped of their citizenship and transferred instead into the jurisdiction of a Palestinian entity of some kind.

Critics argue that such a move would violate the United Nations’ Universal Declaration of Human Rights, to which Israel is a signatory. The declaration states that “no one shall be arbitrarily deprived of his nationality.” In surveys, most Israeli Arabs have rejected the concept.

The question of transfer has been studied before in Israel, the Pew report noted, but with different results. Over the past 13 years, a University of Haifa study has asked whether Arab citizens should leave Israel with proper compensation. In 2015, 32% of Israelis agreed with the statement and 64% disagreed. Meanwhile, a 2015 poll in the newspaper Maariv asked whether Israeli Jews support “voluntary transfer” of Palestinians from the West Bank. Fifty-eight percent of Jews were in favor, while 26% opposed it.

Hermann said that her own research with the Israel Democracy Institute also contradicts Pew’s findings. IDI’s Peace Index project asks if the government should “encourage immigration of Arabs out of the country.” According to Hermann, last year 55% of Israeli Jews disagreed and 37% agreed.

According to Steven M. Cohen, a research professor of Jewish social policy at Hebrew Union College-Jewish Institute of Religion, and an adviser on the Pew study, in addition to the implications inside Israel, the new data on transfer could further alienate American Jews from the Jewish state.

“American Jews project their view of the world on Israelis and when you have something so intolerant and anti-democratic, it runs counter to the American Jewish ethos,” he said.

48% of Israeli Jews Back ‘Expulsion’ or ‘Transfer’ of Arabs, New Pew Survey Says