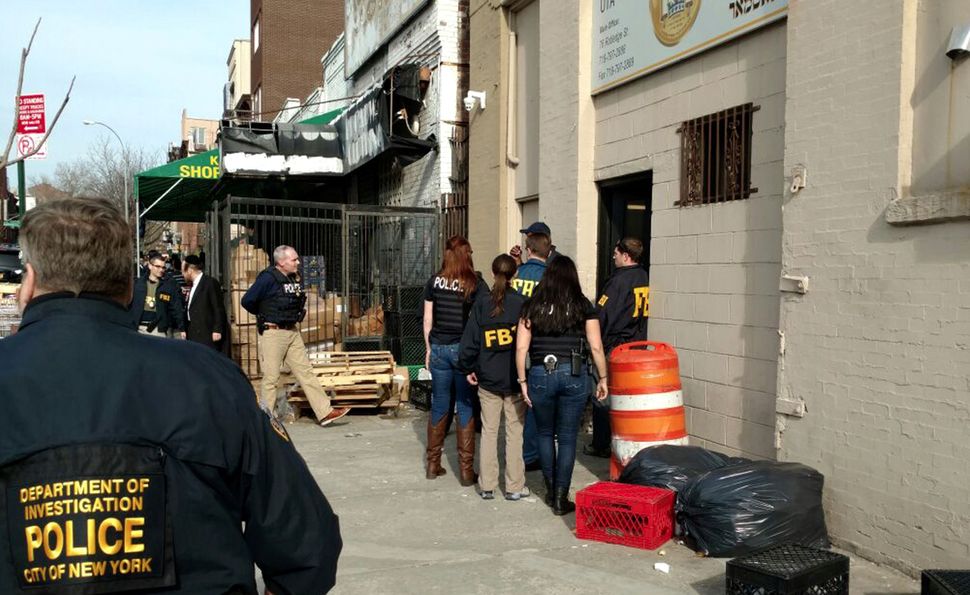 Federal raids last week of yeshivas in Brooklyn and in Rockland and Orange Counties in New York have set Hasidic communities on edge, as concern spreads about a possible government crackdown on Orthodox exploitation of the federal E-Rate technology subsidy program.

Now, the Forward has learned that Hasidic leaders believe that the Federal Bureau of Investigation could also be engaged in a second probe into Orthodox schools’ exploitation of another key federal program.

A person who works in the ultra-Orthodox schools in Williamsburg, Brooklyn told the Forward that school leaders at the Central United Talmudical Academy in Williamsburg are claiming that the March 16 raids on their facility were focused on funds provided by the National School Lunch Program, which subsidizes food for low-income students, and not on E-Rate.

That means the Federal Bureau of Investigation could be engaged in two separate probes into fraudulent use of federal funds by Orthodox yeshivas.

Investigators tracking spending of National School Lunch Program funds had paid a surprise visit Central UTA two weeks earlier, the person who works in the Williamsburg ultra-Orthodox schools said. That inspection had caused other Williamsburg Hasidic schools to exercise caution in recent weeks in how they spend their NSLP funds.

On the afternoon of March 16, FBI agents, accompanied by agents from New York City’s Department of Investigation, visited Central UTA’s administrative offices on Rutledge Street in Williamsburg. Central UTA is affiliated with the followers of Aron Teitelbaum, the Satmar grand rabbi based in Kiryas Joel, the Hasidic village in upstate New York. It is a distinct entity from United Talmudical Academy, the similarly-named Satmar school system affiliated with Zalman Teitelbaum, Aron Teitelbaum’s Williamsburg-based brother and rival.

Michael Tobman, a spokesperson for the followers of Aron Teitelbaum, declined to comment on the raid. “We cannot confirm any subjects or areas of investigation, and have no comment beyond that,” Tobman said.

Hasidic schools, which serve low-income populations, can be eligible for large cash payments for school food programs. In 2011 and 2012, Satmar school systems linked to both Satmar groups received a total of $14.7 million in federal and state NSLP reimbursements. The Buffalo City School District, by comparison, received $12.4 million during that year.

The Rockland County raids, which also took place on March 16, as did those in Brooklyn were part of an investigation into ultra-Orthodox schools’ use of E-Rate, according to the Journal News, a regional newspaper. E-Rate, which is administered by a semi-governmental not-for-profit acting under the auspices Federal Communications Commission, provides subsidies to schools and libraries for Internet and telephone connectivity. The $2 billion annual program has been plagued with fraud over its two-decade existence.

A spokesperson for the FBI told the Forward that the Brooklyn and Rockland County raids were not connected. The NSLP probe has not been previously reported. Hasidic yeshivas receive millions of dollars each year from both E-Rate and the NSLP.

A spokesperson for New York City’s Department of investigations, which investigates corruption in city agencies and in groups that receive city funds, also declined to comment, citing an ongoing investigation.

The National School Lunch Program is one of a number of federal programs administered the United States Department of Agriculture that provide free or reduced-price meals to low-income students. Schools qualify for the program based on the incomes of their students’ families, and can receive bulk food and cash subsidies paid with a mix of state and federal funds.

While little information is available about a possible NSLP investigation, it seems that the reported E-Rate investigation has been in progress for a number of years. The E-Rate consulting group E-Rate Central noted in a post on March 21 that at least one vendor targeted in the Rockland County raids has been essentially cut off from E-Rate funds since the 2012 fiscal year.

The Forward was the first to report in 2013 on ultra-Orthodox exploitation of the E-Rate program. The Forward wrote in February 2013 that Orthodox institutions had claimed to be libraries to earn eligibility for E-Rate funds, and had received disproportionally high payouts from the program. In April 2013, the Forward reported that the ultra-Orthodox town of Lakewood, New Jersey, had received more in E-Rate funds than any other municipality on the state.