Women of the Wall Image by Getty 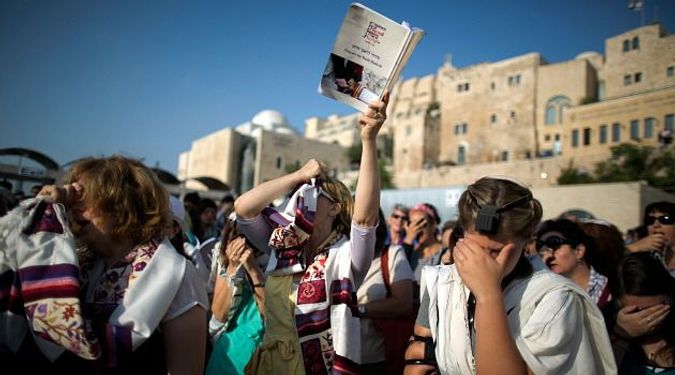 The historic compromise that would have created an egalitarian prayer section at the holy Western Wall has been compromised.

Under intense pressure from his ultra-Orthodox coalition partners, Israeli Prime Minister Benjamin Netanyahu said Sunday that “several difficulties arose” with the painstakingly-negotiated deal and that new talks will be held.

The difficulties? It comes down to modern day politics and ancient patriarchal power that refuses to change with the times — and believes it has the final say on what it means to be a Jew, Reform and Conservative critics say.

Bibi has in recent weeks come under intense pressure from the right, whose leaders have said they vigorously oppose the deal the government negotiated in January and agreed to by Western Wall Rabbi Shmuel Rabinowitz.

That deal would have created a separate mixed prayer section at the Kotel. The rabbi’s own constituency was furious and Rabinowitz recently flip-flopped on the deal. He asked Orthodox politicians to get the deal nixed and even sought to cancel a 2013 court order that let Women of the Wall activists to pray in the main Orthodox section of the wall.

Further complicating the deal was the defiant refusal of Minister of Religious Affairs David Azoulay to implement the compromise.

Netanyahu issued the following statement Sunday: “Approximately two months ago, the Cabinet decided to implement of the advisory committee on prayer arrangements at the Western Wall. Since then, several difficulties have arisen. We are working to resolve them.I would like to reiterate my commitment to resolve the issue of prayer arrangements at the Western Wall in the aforesaid direction.”

David Sharan, the head of Bibi’s bureau Chief, has been tapped to preside over a new round of talks.

Sharan will “coordinate discussions on this issue with the various elements and to present – within 60 days – a recommendation on the steps necessary to resolve the difficulties, according to the solution that has been proposed,” Netanyahu said.

Reform and Conservative Jewish leaders and activists from Women of the Wall are crying foul and threatening to go to court if the negotiated egalitarian prayer pact is watered down.

“This would be a nightmare scenario from a Jewish and Zionist perspective. It would even be a strategic, fatal and unprecedented blow to the status of Israel as the state of the Jewish people,” said Yizhar Hess, the head of the Conservative movement in Israel.

“We call on the prime minister to make clear to his ultra-Orthodox partners that the unity of the Jewish people and the connection between the state of Israel and world Jewry cannot be held captive to street battles within the ultra-Orthodox community,” he said, “and to take a clear and public stand against the continued incitement of ultra-Orthodox politicians against millions of Reform Jews.”