The City University of New York’s efforts to deal with charges and countercharges about anti-Semitism and free speech on campus regarding Israel will soon face a daunting new challenge: On April 15, the school system’s graduate student council will vote on a resolution to boycott Israeli academic institutions.

Hamad Sindhi, co-chair for communications at CUNY’s Doctoral Students’ Council, said that no copies of the resolution would be made available to the public prior to the vote. But a purported version of the resolution on the conservative website Legal Insurrection lists numerous allegations of human rights violations by Israel against Palestinians in the occupied territories the Jewish state controls and concludes by endorsing a boycott of Israeli colleges and universities “as long as the Israeli state continues to violate Palestinian rights under international law.”

The vote, announced by the council April 4, is sure to intensify the controversy currently embroiling the largest urban university system in the country. According to the Jerusalem Post, a similar resolution the DSC considered in 2014 garnered 31 votes in favor of a boycott and 25 against but fell short of the super-majority required under the council’s rules.

The looming vote comes as New York politicians move to address allegations of anti-Semitism at some of the schools’ largest campuses, with some drafting legislation to monitor campus bias while others call for the outright ban of a pro-Palestinian campus group.

In the latter group, New York State Assemblyman Dov Hikind reaffirmed his condemnation of Students for Justice in Palestine, which has come under fire following allegations of anti-Semitism from the right-leaning pro-Israel group Zionist Organization of America. SJP, a registered student group on several CUNY campuses, is a prominent voice in the movement to boycott, divestment from and sanction Israel, or BDS, and has some 100 chapters on campuses nationwide. Like all such registered student groups, it receives a small amount of funding from student fees. 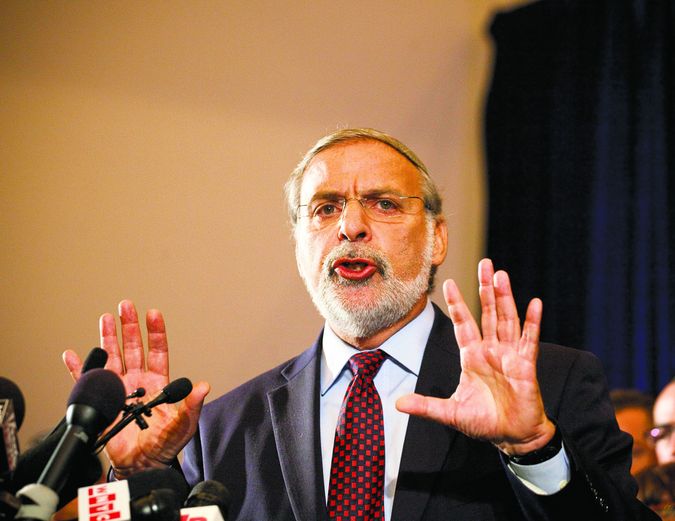 “They should be dismissed immediately,” Hikind told the Forward about SJP. “They’re getting my tax dollars and being funded by the university,” Earlier, Hikind rallied 34 other New York City and New York State lawmakers to sign a sternly worded letter March 29 to CUNY about SJP, which he believes encourages “violence against Jews.” The letter demanded that SJP be suspended as a student group from all CUNY campuses.

CUNY has brought in independent investigators to look into allegations of anti-Semitism within SJP, which stem from a 14-page memo ZOA sent to the CUNY board on February 24. But Hikind said he didn’t “have much faith” in the process. “This is a way to encourage those involved in investigating [the group to] carry it out honestly,” he said.

‘It’s a disgrace that legislators… are calling for CUNY to violate students’ First Amendment rights.’

In its memo, ZOA alleges that SJP is largely responsible for multiple episodes of anti-Semitism on CUNY campuses. A recent Forward investigation into ZOA’s allegations found a more complex and somewhat murkier scene.

It is clear that some Jewish students on CUNY campuses have experienced verbal hostility and threatening gestures from other students on campus, who describe themselves as opposed to Zionism but not to Jews. There are also reports of swastikas and other anti-Semitic symbols and messages on some CUNY campuses.

But it was not clear that the anti-Semitism was as sweeping as ZOA alleged, or that SJP — which has Jewish members and has partnered with leftist Jewish groups — could be held responsible for the incidents that ZOA described.

Meanwhile, the New York City Council’s Jewish Caucus is moving forward with its own legislation to address reports of campus anti-Semitism.

New York Democrat Mark Levine is involved in drafting a bill that would require CUNY to track and monitor anti-Semitism and other incidents of bias on campus. Fellow Democrat Chaim Deutsch is serving as the bill’s lead sponsor.

“It’s going to allow for a much more informed conversation about the state of anti-Semitic incidents, and every kind of biased incident, including Islamophobia and every other form of hate,” Levine said.

Levine admitted there has been some concern from his constituents, who feared the bill could stifle campus dialogue surrounding the Israeli-Palestinian conflict.

“My response to that is that I’m a fierce defender of academic freedom, and if there’s anywhere where we should be able to have difficult discussions on contentious issues, it’s in an academic setting,” Levine said. “But having a policy discussion, no matter how robust, is not the same as the kind of vicious personal attacks that some Jewish students at CUNY have been subjected to, and that’s the kind of behavior that we shouldn’t tolerate on any CUNY campus.”

SJP and its defenders are pushing back.

SJP representatives have condemned anti-Semitism on campus. An SJP leader, Nerdeen Kiswani, conceded that “people can use the Palestinian cause to spread their own hatred,” but she said that SJP as a group “stands against any form of racism.”

“It’s a disgrace that legislators who are sworn to uphold the U.S. Constitution are calling for CUNY to violate students’ First Amendment rights in order to protect Israel from criticism,” said Radhika Sainath, a lawyer for Palestine Legal, which provides legal advice to SJP.

CUNY has declined to reveal details about its ongoing investigation into SJP, and did not respond immediately to comment on Hikind’s public letter.