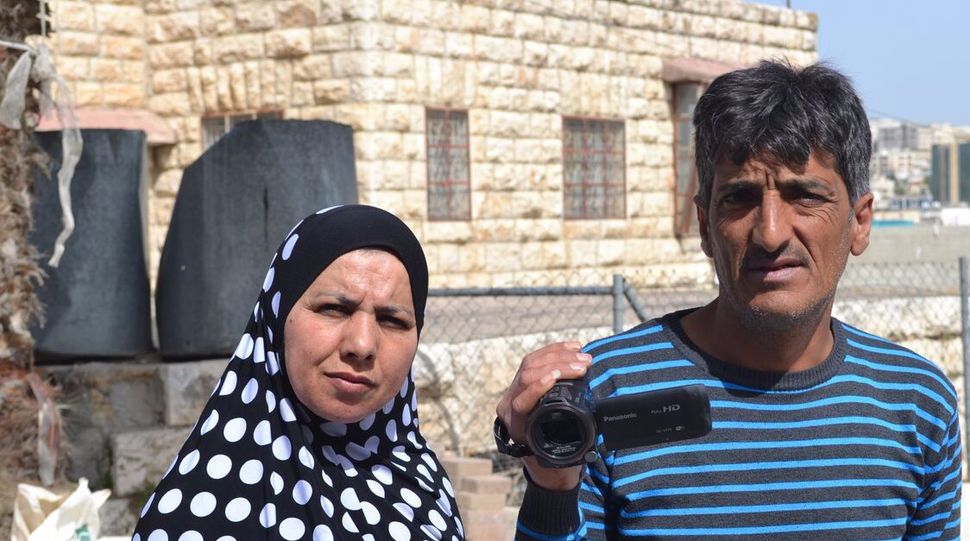 Imad and Fayzeh Abu Shamsiyeh heard the gunshots reverberate at close range as they were sitting on the porch of their Hebron home, drinking coffee.

Quickly, Imad Abu Shamsiyeh went to check on the construction workers who were renovating a section of their home. None of them were hurt. Then, rather than duck inside until the trouble passed over, Abu Shamsiyeh did the opposite: He grabbed his Panasonic flip camera and, with his wife, walked up a nearby hill in the direction of the shots.

It was March 24, and though he didn’t know it at the moment, Abu Shamsiyeh, a volunteer with the Israeli rights group B’Tselem, had walked into the tense aftermath of an attack. Two Palestinian men, Abd al-Fatah al-Sharif, 21, and Ramzi al-Qasrawi, 20, had stabbed an Israeli soldier. They were lying immobilized on the ground, surrounded by Israeli soldiers and medical personnel. Abu Shamsiyeh began filming, while his wife tried to approach one of the Palestinian men to offer medical help.

Soldiers told them to leave the area, so Abu Shamsiyeh retreated to the roof of a neighbor’s home and kept filming. He watched as ambulances arrived and gave medical aid to a soldier, leaving the two Palestinian men on the ground. Then, he said, “I heard a soldier preparing to shoot.” He was terrified that the soldier was going to shoot him for filming, but he kept his camera calmly trained on the scene so that “it was all well-documented.” Instead, the soldier pointed his gun at al-Sharif and shot him dead.

“At that moment I was panic stricken,” Abu Shamsiyeh said. “As a human being, I could not take it.” He went back to his home and, crying, downloaded the film onto his computer to make a copy. Watching the footage, it was clear to him that al-Sharif had been shot in the head. “That is when I realized I had taken a picture of a drastic, huge situation, which the whole world must see.”

He sent the footage to B’Tselem, which verified the names of the people involved and other details. B’Tselem distributed it to the Israeli press over the WhatsApp messaging service. And before long, Abu Shamsiyeh’s footage was being viewed all over the world. It has become one of the most viral clips in the current wave of violence between Israelis and Palestinians, characterized by the proliferation of the on-the-scene video clips of the attacks and their aftermath.

The incident has far-reaching implications. The soldier shooter, who was actually an army medic, is in the custody of the Israel Defense Forces, facing manslaughter charges. (Israel-based journalists are prevented from naming the soldier because of a government gag order.) According to The Jerusalem Post, he told family members, after his arrest by military police, that he feared al-Sharif was wearing an explosive vest and might detonate it. But the initial internal IDF investigation has found that the soldier acted on his own accord. His conduct, the investigation found, “contradicts” the IDF’s ethical code.

Palestinians and human rights groups, on the other hand, contend that Israeli soldiers execute Palestinian attackers frequently without due process, regardless of whether or not they continue to pose a threat.

“One soldier appears to briefly speak with another soldier, raises his assault rifle, walks toward al-Sharif and, after two other soldiers step back out of the way, shoots al-Sharif in the head,” Human Rights Watch noted in its report on the video. Another video that circulated on social media, HRW said, shows a soldier casually walking over afterward to “push al-Qasrawi’s body with his foot to roll it over.”

According to HRW, “the open and casual way” the soldier shoots the prone al-Sharif “suggests a dangerous climate of impunity.”

Abu Shamsiyeh agrees. “The soldier is a victim of the policy of the state,” he said. “Had the policy not been to shoot all the time, this soldier would not have dared to shoot. That is why the video became viral.”

Meanwhile, many Israelis have rallied around the soldier, whose family said he has been “lynched” in the media. A Channel 2 poll showed that 57% of Israelis opposed the arrest and investigation of the soldier, while the social media conversation has been overwhelmingly supportive of him. 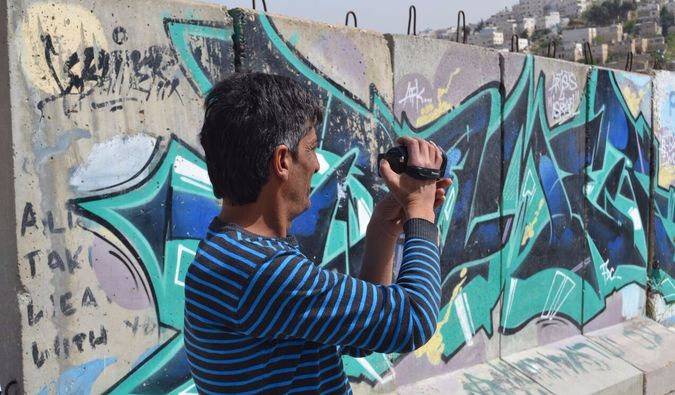 Israeli rage at the soldier’s treatment has, among other things, been directed at the 46-year-old Abu Shamsiyeh. He lives in Tel Rumeida, a hilly Palestinian neighborhood of Hebron on a street flanked by military checkpoints. Tel Rumeida is also home to some of the most extreme settlers, like Baruch Marzel, a Boston-born Israeli politician and onetime associate of Rabbi Meir Kahane, the former anti-Arab Knesset member who was assassinated in 1990.

Abu Shamsiyeh told HRW that after the shooting, when soldiers noticed that he and several journalists were gathered on the roof above the scene, “They pointed their guns at us and screamed at us to get down.” According to the HRW report, after the video got out, Abu Shamsiyeh was asked to give a statement to the military police in Hebron. The interrogator, he told the human rights group, sought to intimidate him into saying he did not film the shooting. “Who is going to protect you and your family from right-wing Israelis?” he recalled the interrogator saying. “Remember, you live in [Tel Rumeida], surrounded by Israeli settlers. Who will be able to protect you there?”

Indeed, Abu Shamsiyeh told the Forward that the harassment started just hours after his footage went viral, when he received a phone call in Arabic: “You and your family will be burned if you do not depart Tel Rumeida.” The next night, a “huge number” of settlers came to the gate outside Abu Shamsiyeh’s home, shouting insults such as “dog” and “son of a bitch.” He said that the Israeli military moved them away, but later that night they came back and “started pounding with their feet on my roof.” Soldiers intervened again. The harassment has occurred online, too. Shamsiyeh’s photograph was posted to Facebook with the word “wanted” and his phone number. The poster urged Jews to call him to tell him “how much we love him.” B’Tselem reported the image to Facebook, which removed it.

Abu Shamsiyeh said he had complained to the Israeli forces about his treatment at the hands of settlers. But the response has been inadequate, he complained: “I told them, ‘I hold you accountable for the safety of myself and my children and my family.’” Under international law, the IDF is obligated to protect the residents of the occupied territory under its control.

Abu Shamsiyeh and his wife said that they and their children have endured harassment from settlers since they moved to Tel Rumeida in 2009. The home there belonged to Abu Shamsiyeh’s family, but had been abandoned since 1996, when his uncle, fed up with the tension in Tel Rumeida, left Hebron for Ramallah. Worried that settlers would take over the empty home, Abu Shamsiyeh’s family convened a meeting and decided someone had to move back in. At the time, Abu Shamsiyeh, a secular-oriented Muslim cobbler with five children, was feeling squeezed by the high rent in Hebron’s Old City. “I immediately volunteered. I said, ‘I am not afraid, and I will go and protect our house,’” he said.

Abu Shamsiyeh visited the house and saw that a short concrete wall had been built on one side of it, shielding it from the street. A soldier was standing on the roof. He and the solider talked, and Abu Shamsiyeh learned that the roof had been declared an IDF position. But the home itself was still habitable. Soon after, Abu Shamsiyeh and his wife moved their belongings in by cart, since, he said, Palestinian cars are not allowed on the street. (An IDF spokesperson said that “restricted movement” in Tel Rumeida was due to “multiple terror attacks” in the area, and added that the restrictions don’t apply to permanent residents. The spokesman also said that Abu Shamsiyeh has use of his roof, despite its status as an IDF position.)

In 2010, the couple’s 13-year-old daughter, Madelen, was pursued by five Jewish men on her way to school, Abu Shamsiyeh said. They threw a stone at her face, drawing blood and knocking her unconscious. A Palestinian field worker from B’Tselem came to the hospital to gather testimony from the family. “That is when they asked me would you like to document what his going on here in a voluntary way,” Abu Shamsieyh said. He was given a camera and a plastic card that identified him as a B’Tselem volunteer.

B’Tselem’s camera project began in Tel Rumeida three years earlier, when the organization gave a camera to Abu Shamsiyeh’s young neighbor, Rajaa Abu ‘Ayeshah. Her first video depicted a settler peering through a cage that her family had erected outside its home for protection, and calling Abu ‘Ayeshah a “whore.” Since then, the organization has gathered thousands of hours of tape from Palestinian volunteers, documenting human rights abuses in the occupied territories. The footage is used by the media and also as evidence in court proceedings.

When Abu Shamsiyeh picked up his B’Tselem video camera, he was channeling his teenage ambition to be a professional photographer. He had abandoned that path after a botched inoculation left him with a limp and his peers mocked him, saying his crooked posture would make him take tilted photos. Photography became a hobby instead. “He took millions of pictures of our daughter,” Fayzeh Abu Shamsiyeh said.

It wasn’t long before Abu Shamsiyeh and his wife became celebrities in the neighborhood and in greater Hebron for their camera skills. “We have become well known for our documentation skills, and whoever is having trouble with the settlers calls us if a clash erupts,” he said. He attended B’Tselem trainings and learned about human rights law.

But Abu Shamsiyeh also saw limitations in working with an Israeli-run organization. “I have to tell you, frankly, that some Palestinians do not like to work with Israeli organizations, even if they are as good as B’Tselem,” he said. He initiated his own camera project, called the Human Rights Defenders, to provide a Palestinian alternative, and distributed several cameras throughout the neighborhood. The March 24 footage was actually captured on a Human Rights Defenders camera.

Meanwhile, he has kept volunteering with B’Tselem. “I feel indebted to B’Tselem,” he said, explaining why he sent the March 24 footage to the organization first.

Abu Shamsiyeh said that the camera is a “weapon” and can defuse a tense situation. He believes that when soldiers see him filming, they act less harshly with Palestinians, for fear that their actions will be broadcast across the world.

But lately Abu Shamsiyeh has been concerned that the camera has marked him as a target. Two weeks after the he made the famous clip, he walked with his wife to the spot where al-Sharif was killed, video camera in hand. She pointed to a dark spot on the asphalt — the Palestinian assailant’s bloodstain, she said. Just then, a group of soldiers passed on foot. Fayzeh Abu Shamsiyeh grabbed her husband’s camera, admonishing him not to film them. She was worried that they might turn on him next, she said.