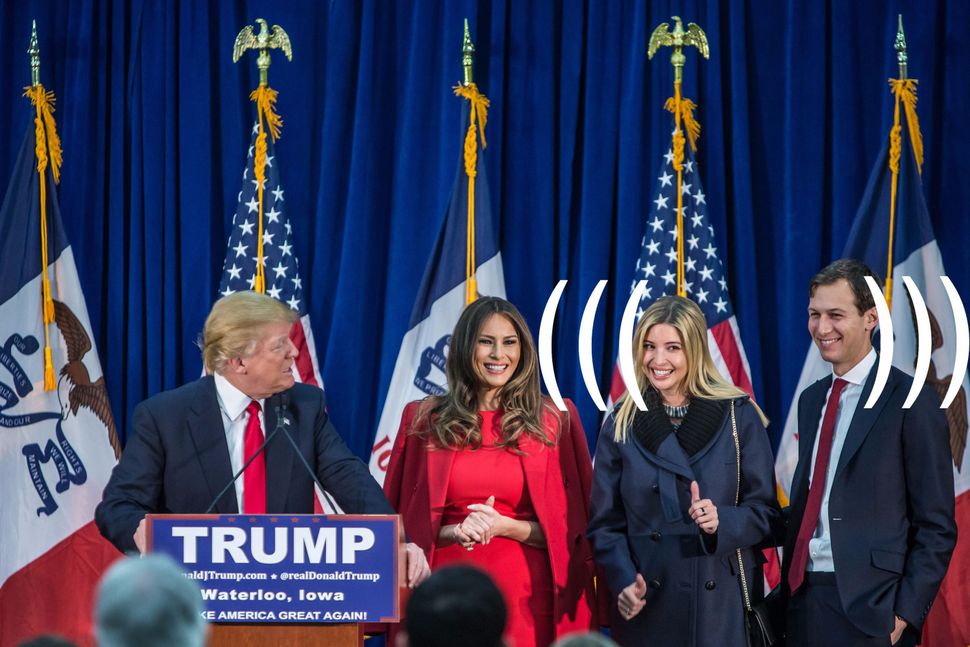 One of my daughters is Jewish!

The developer of the Google Chrome extension Coincidence Detector, which identifies Jewish individuals and organizations by putting triple parentheses around their names, pulled the application last night after several news reports exposed it to the general public.

A Forward reporter was exploring the extension on her laptop in order to better write about it at around midnight eastern time when Coincidence Detector disappeared from her browser and Google’s app store.

The name “Coincidence Detector” reminds its users that Jews are involved in many facets of public life. It also replaces Israel with the words “Our Closest Ally.”

Google’s press office declined to comment on the record regarding specific applications and extensions, but a staffer on the Google Store’s customer service line said the developer of the application had pulled it because it had been “used to track a certain race.” Mic.com, which published the first report about the application, said Google took the extension down because it violated its policies against hate speech.

Google’s Developer Program Policies prohibit apps that “contain materials that threaten, harass, or bully other users” and “content advocating against groups of people based on their race or ethnic origin, religion, disability, gender, age, veteran status, or sexual orientation/gender identity,” but the Coincidence Detector was available long enough to be downloaded by 2,500 users.

This use of technology to target Jews on the Internet reflects a broader trend.

As the Anti-Defamation League reported in May, “there are legions of anony­mous Twit­ter users who are exploit­ing the Inter­net to carry out these anti-Semitic cam­paigns against Jew­ish jour­nal­ists. While white suprema­cists used to pro­mote their anti-Jewish pro­pa­ganda on extrem­ist forums and ran­dom web­sites, they are now able to main­stream their hate on sites used by mil­lions of peo­ple and eas­ily recruit oth­ers to join in their efforts.”

Last night, the name of the application’s developer listed on the Google Store changed from “altrightmedia” to “TheRightStuff.” A twitter user with the same pseudonym as the latter developer took to social media to suggest that Jews forced Google to remove the application:

They can shut it down on google, but the last laugh will be ours. The coincidence detector is written in to the core code of @urbit_ #NRx

I mean, one would almost be lead to conclude that Jews are hysterical, unhinged, paranoid and vindictive. That can’t be it though can it?

When asked for their policy on hate speech deletion, the Twitter press office pointed to their Hateful Conduct Policy, which prohibits tweets that “promote violence against or directly attack or threaten other people on the basis of race, ethnicity, national origin, sexual orientation, gender, gender identity, religious affiliation, age, disability, or disease.” The policy adds that Twitter also prohibits “accounts whose primary purpose is inciting harm towards others on the basis of these categories.” When asked how incidents of possible anti-Semitism on Twitter are handled, or whether anti-Semitic tweets and users violated their Harassment Policy through the “targeted abuse or harassment of others,” Twitter sent a press release on the establishment of their Trust & Safety Council from February of this year, and referred other questions to the Anti-Defamation League, with whom they said they have a “safety partnership.”

The Anti-Defamation League press office could not be reached for comment.

As the website of “Mr. Right” also explains, he’s responsible for the podcast The Daily Shoah, a deeply anti-Semitic podcast which Mic magazine credited with establishing the habit of putting Jewish names in parentheses as far back as 2014.

The Right Stuff also announced via Twitter that although the Coincidence Detector extension is down for now, the underlying code is safe:

I’m just glad that our server that scrapes the net for Jewish names and adds them to a central database is still secure.

• How Donald Trump Became the Darling of White Supremacists