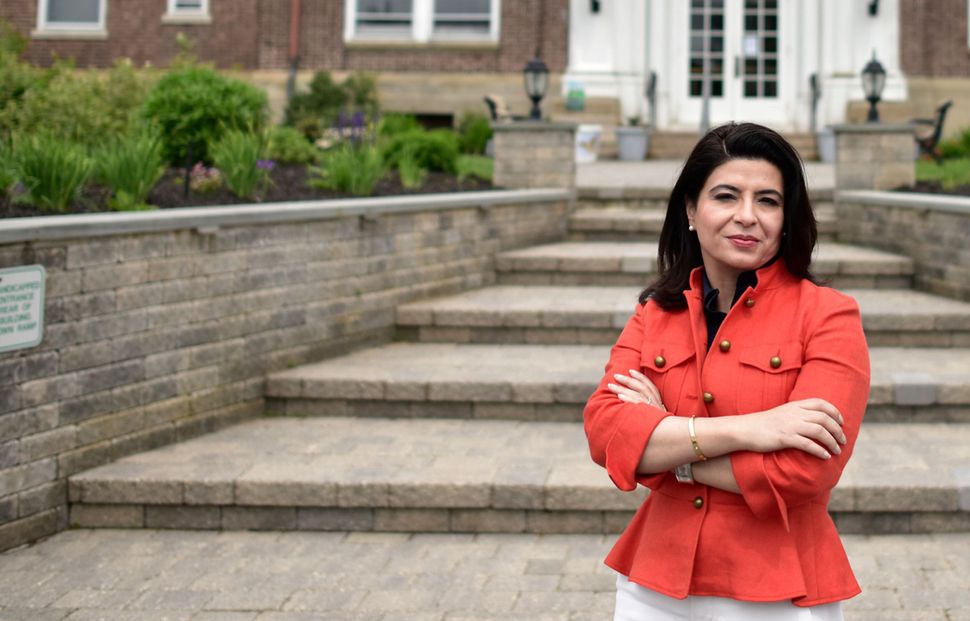 Anna Kaplan is a Jewish Iranian refugee who has been living in America for almost four decades. She’s a councilwoman in Long Island, New York and on June 28 will run against five other candidates in the Democratic primary to determine who will face Jack Martins, the Republican candidates, this fall, when voters decide who will represent New York’s third congressional district.

The current representative is Steve Israel, a Democrat, who will be retiring this year after 16 years. The most prominent candidate is Tom Suozzi, the former Nassau County executive. Kaplan is among Suozzi’s main opponents.

Kaplan, who’s got the endorsement of the state chapter of the National Organization for Women, would be the first Iranian American in Congress.

A refugee herself, she has said that Donald Trump’s rise — and his anti-immigrant rhetoric — hits especially close to home. She even recently found herself on the receiving end of anti-Semitic Twitter attacks, lobbed at her by what she says are Trump supporters.

Here are five things to know about Kaplan ahead of tomorrow’s primaries. She could not be reached immediately for comment.

1. Growing up in Iran she experienced anti-Semitism — and fled after the revolution.

Kaplan, in an interview with the website Lenny, said, “I think Iranian people are wonderful people, but there was anti-Semitism.” Growing up, she said, she encountered religious prejudice. Even as a young girl, it was clear to her that her family was treated differently because they were Jewish.

She was born Anna Monahemi in the small city of Tabriz. She grew up in the capital Tehran. At 13, the Iranian revolution erupted and Kaplan fled the country. Her family ultimately settled in Jamaica Estates, Queens. Kaplan attended the Stern College for Women at Yeshiva University and Benjamin Cardozo School of Law.

2. Like many other Jews, she’s been targeted by ‘Trump bullies’ online.

As a political refugee, Kaplan has said that she sees the rise of Donald Trump — and his threatening rhetoric towards some immigrants — as personally troubling. “If Donald Trump was in the White House and I was in Iran, and I wanted to come here, I might not be able to,” Kaplan said. “When we start excluding certain groups, I think it’s a very wrong path.”

Kaplan was recently attacked online by what she calls Trump bullies. The online furor prompted her to make a video response, posted online with the hashtag #Iwillnotrun. She fled the Iranian revolution, a representative from her campaign explained, so she would not “run away” in the face of political bullying in America.

As a Jewish refugee, I fled Iran. So @realDonaldTrump bullies have targeted my campaign of inclusion…#IwillNotRun https://t.co/fWeYjWLTv7

Last year’s much-discussed Iran nuclear deal t; Kaplan opposed it. Kaplan said that as much as she loves the Iranian people, many of her constituents did not think it was the best deal. But now that the deal has been reached, she noted, “We need to make sure that every part of that agreement, every condition, is being met.”

4. She wants to ban assault weapons.

On the heels of a mass shooting in Orlando, Florida, Kaplan launched a six-point legislative initiative to reduce gun violence.

“Unfortunately, there is a predictable pattern after every horrific shooting,” Kaplan said to the news site The Island Now. “There’s wall-to-wall media coverage… and for a moment it seems like something will be done. But inevitability the cameras move on to the next story, the nation’s attention is averted and politician do nothing.”

Kaplan had an international upbringing. As a result, she speaks a handful of languages — including Farsi, Aramaic, and Turkish.