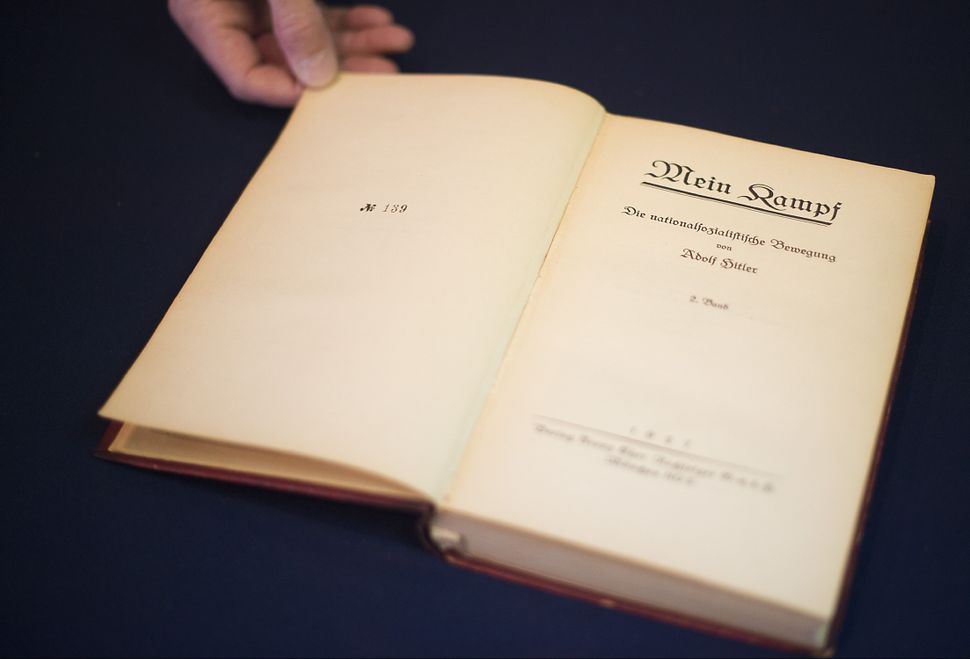 A German edition of “Mein Kampf.” Image by Getty

Jewish Family & Children’s Service, which is based in Waltham, Massachusetts, and serves the Boston metro area, will receive the reportedly tens of thousands of dollars generated each year by the book’s sales.

The Boston-based publisher, Houghton Mifflin Harcourt, originally planned to donate the money to a wider array of local non-profits, hoping to fund organizations that support tolerance in general, and are not directly related to Holocaust awareness or caring for survivors. But the Boston Jewish community, as well as the Anti-Defamation League, criticized the move.

“Holocaust education and Holocaust awareness should be at the top of the list for these profits,” Robert Trestan, director of the New England office of the Anti-Defamation League, told the Boston Globe. “Number two would be anti-bias education.”

The status of Holocaust survivors is a major source of controversy in Israel, where an estimated 40,000 survivors live below the poverty line, representing 30% of all Israeli survivors. A 2015 report found that Israeli survivors are on average 83 years old, and that a third live alone.

Germany has come under fire in recent years for not allocating an appropriate amount of funding to care for the survivors who still live there. The government has in recent years imposed a 25-hour-per-week cap on in-home care.

On June 8 the House of Representatives overwhelmingly passed a resolution urging Germany to increase its funding for care of Holocaust survivors.

Houghton Mifflin has had the publishing rights to “Mein Kampf” since 1933, when it released the first American edition of the book, translating the title to “My Battle.” At the outbreak of World War II the U.S. government seized royalties from the book.

A German publishing firm released an extensively annotated edition of the book earlier this year. The book, which was banned in Germany for seventy years, reached the number two spot on the German newspaper Der Spiegel’s nonfiction bestseller list.