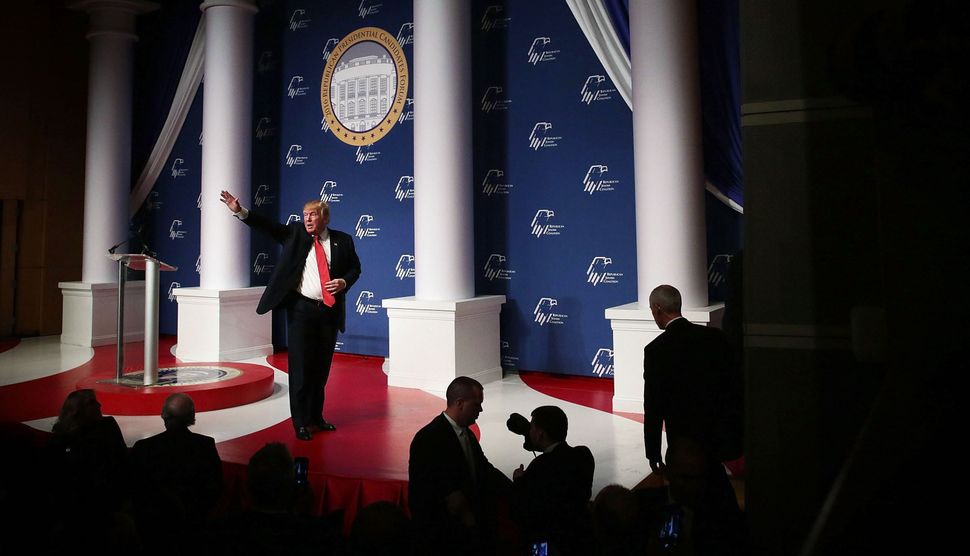 Lew Eisenberg, a New Jersey investor and longtime political fundraiser, serves as finance chair of Trump Victory, the main fundraising arm of the Trump campaign. He holds the same position for the Republican National Committee.

However, he has yet to make any personal contributions to the Trump campaign. Nor was he active in the pro-Trump camp during the primaries.

Lots of Jewish Republicans share Eisenberg’s seeming ambivalence toward Trump. They are entering the party’s convention July 18–21 in dire shape: Donations from Jewish donors, once a mainstay of Republican fundraising, are at an all-time low; major Jewish activists have turned their back on the party’s presumptive nominee, and a growing number of high-profile Jewish Republicans plan to boycott the Cleveland convention, preferring to stay home rather than attend the crowning of Trump as the party’s nominee.

“It would not be surprising if Hillary Clinton gets 90% of the Jewish vote,” one columnist wrote on July 11. Jewish Republican columnist Jennifer Rubin, voicing the anxiety of many longtime Jewish GOP backers, made this estimate — not some giddy Jewish Democrat awash in schadenfraude while watching the troubles of rival Republicans.

Rubin’s prediction hints at a possible reversal of fortune for the Republican Jewish Coalition, a 40,000-member organization that has claimed success in its longstanding project of flipping Jews — a demographic known as stalwart Democrats — to its side. The group has seen growth in recent elections, raising the Republican share of Jewish votes from a low of 11% in George H.W. Bush’s 1992 re-election bid up to 30% in the 2012 election cycle, where a perception of tension between President Obama and the Israeli prime minister helped shift some Jewish voters to the side of challenger Mitt Romney.

Donald Trump’s recent “Star of David” incident, in which he defended social media imagery sourced from an anti-Semitic website, his latest expressions of admiration to former Iraqi dictator Saddam Hussein’s counter-terrorism techniques, and the candidate’s general refusal to moderate his rhetoric have pushed some Jewish Republicans to conclude that the GOP’s presumptive nominee has reached the forever alienated Jewish voters and donors.

And so Republican Jewish donors find themselves in the delicate situation of standing between their community and a presidential candidate opposed vociferously by large swaths of his potential Jewish constituency.

“I’m doing my best to help the overall effort, but working hard for Trump is not something I can do,” said a longtime Jewish donor who asked not to be identified out of concern of showing discord among Republican donors. “I’m not the only one,” he added, “Jewish donors aren’t running” to Trump’s aid.

The numbers are striking.

A Wall Street Journal analysis of campaign donations made by board members of the RJC, all major GOP contributors, found that through the month of May they’ve given only $5,400 to Trump. In the previous election cycle, RJC board members were responsible for $16.5 million of Romney’s war chest.

Not all RJC board members are sitting out this election cycle. Some have taken on an active role in funding Trump’s presidential run, though so far they, too, have done so mainly in words and less by actually writing checks.

Sheldon Adelson, the Las Vegas casino billionaire, has promised, reportedly, to provide Trump with up to $100 million for his campaign, though so far no such donation has showed up on federal filings.

“We let all our board members make their own decisions with their contributions,” said Mark McNulty, spokesman of the RJC, in response to questions on the RJC board’s low fundraising numbers for Trump.

The group’s board is split in its attitude toward Trump, with top donor Adelson siding with the New York real estate developer and reality TV impresario, while board member Paul Singer, another Republican Jewish mega-donor, is leading the anti-Trump camp.

In between there are many board members who simply can’t decide, or are reluctant to take action on behalf of the Republican nominee.

“I have not made up my mind who to vote for, because I’d like to learn more,” RJC board member and donor Ken Bialkin said. A former chair of the Conference of Presidents of Major American Jewish Organizations and the current leader of the America-Israel Friendship League, Bialkin has had a chance to meet with Trump’s advisers on Israel and does not share the “neverTrump” sentiment some Jewish Republicans hold. But Bialkin is not yet prepared to pick sides, or to open his checkbook. Trump, he fears, “doesn’t have the base of knowledge that makes you say, ‘I have no problem.’”

For some, the solution has been to turn away from the presidential race altogether. “A lot of us are focusing our efforts on House and Senate races,” an RJC board member said. “If we don’t win the White House, it’s important to at least keep the House and maybe also the Senate.”

The RJC, too, is, thus far, speaking as little as possible about Trump and has focused instead on attacking his rival. The group ran advertisements going after Clinton following the FBI report on her handling of classified information, and had attacked the Democratic Party for considering a more pro-Palestinian platform language, which was later rejected. It is also involved in local House and Senate races.

But Trump rarely shows up in the group’s public appeal.

“The RJC will play its traditional role in the 2016 election of promoting a Republican Party that supports a strong U.S.-Israel relationship and also a foreign policy that is robust and seeks worldwide peace through strength,” McNulty said. “We look forward to working with our elected partners in the House and Senate and maintaining our majorities in order to put the best foot forward on the world stage.” But the spokesman did not mention Trump by name, even after being asked repeatedly by the Forward about the candidate. The RJC also declined to make any comments regarding possible anti-Semitism in the Trump campaign following the Star of David ad.

The group intends to hold receptions and fundraising events on the sidelines of the Cleveland convention, but it is not clear if these events, all closed to press coverage, will focus on Trump’s race to the White House or on congressional races.

The group may also may find that some of its guests at these events are no-shows. Several top Jewish Republicans have already announced their intention to skip the convention, an event that is usually viewed as a must for political players.

“Just didn’t have any compelling reason to go,” RJC board member and major donor Fred Zeidman told Jewish Insider. His son Jay Zeiden, another key Jewish GOP activist, added, “It is sad that so many people who spoke out against Trump are now willing to support him just because he’s the nominee.” Several other former Jewish Bush advisers and fundraisers have already announced that they have other plans for that week.

Others are actively trying to sway Jewish Republicans away from Trump. Like Rubin, leading the charge on Twitter is Dan Senor, a former Bush administration adviser who took issue with “leading Jewish Republicans who have recently signed on for large fundraising roles” with the Trump campaign. “During each controversy they hide, which is depressing enough,” Senor tweeted after the “Star of David” controversy broke. “But that they remain silent after this latest incident is inexplicable.”

“I’ve heard a lot of Jews saying terrible things about Trump,” said Bialkin, still firmly on the fence. “I’m not sure. Him speaking up for Israel gives me a good feeling, but it’s not a guarantee.”

And what about Rubin’s 90% estimate?

A top Jewish donor said she might not be that far off the mark.

“I hope she’s wrong,” he said, “but frankly, Trump has not given anyone a warm and fuzzy feeling that would make them want to switch to our side.”