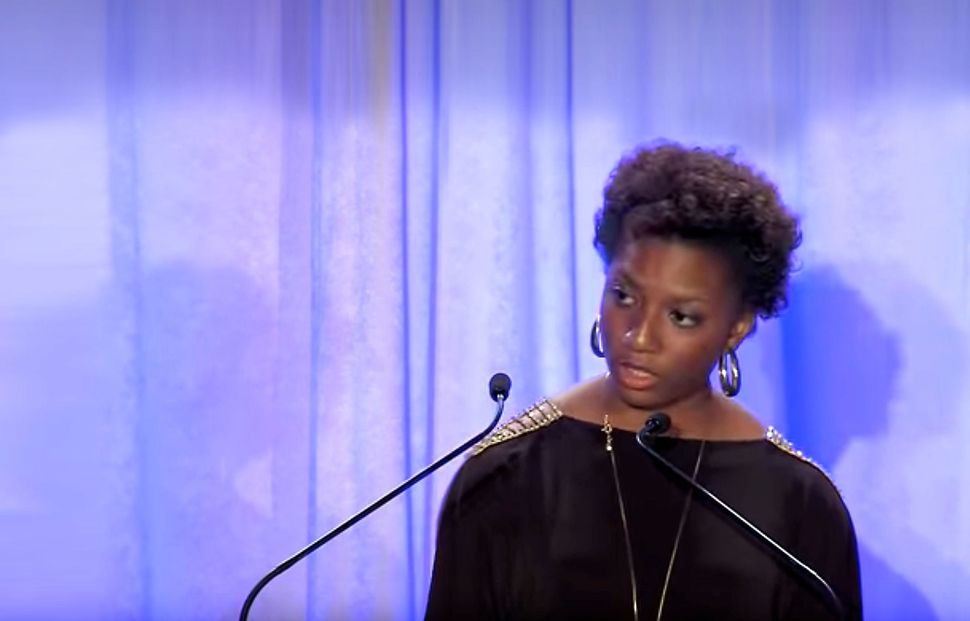 A prominent African-American Zionist used social media to ‏blast a campus group for drawing parallels between racial violence in this country and the occupation of Palestinian lands by the Israeli military.

“I’m just like, wait a minute SJP. Let’s be real,” Chloé Simone Valdary said in the brief video, posted on both her Facebook and Twitter feeds on July 12. “The majority of people in your organization are Arabs. Let’s be real. Today Arabs still engaged in the African slave trade. I’m just putting it out there.”

“Don’t act like you have solidarity with my people,” Valdery said, adding: “You need to stay in your lane.”

In recent years pro-Israel groups like the American Israel Public Affairs Committee have intensified outreach to non-Jewish and African American communities, in an effort to built a wider base of support. Valdery has collaborated with both AIPAC and the Zionist Organization of America. In 2014, Tablet Magazine heralded Valdary as an “African American firebrand” who “wants to ignite a Zionist renaissance.”

The Arab slave trade across the Sahara is among the oldest slave trades in history. Forms of slavery continue today in countries like Mauritania and Sudan; in Sudan, for example, following the 1983 civil war large numbers of ethnic Dinka, Nuer and Nuba were captured, enslaved or exploited in other ways by Afro-Arabs from the north.

Valdary also mentioned Hamas and an Ethiopian Israeli who has been held hostage by the Palestinian political group for two years.

“Legitimately, there are Ethiopian Israelis in Gaza today that are still held by Hamas. Where you at, fam? You going to talk about that? That doesn’t really fit into your narrative?” Valdary said.

Valdary was responding to a post from last week from the New York University branch of SJP. In that post, SJP was reacting to the killing of two African-Americans by police officers that sent shockwaves across the country — prompting a deep and probing national conversation about the racial politics of policing in America.

“What this means is that Palestinians must stand with out black comrades,” the post read, “Palestinian liberation and black liberation go together.” 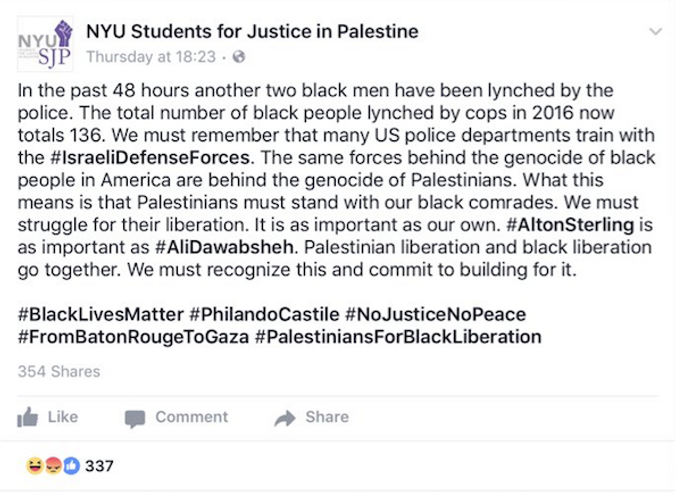 The “sordid history of American violence towards black people far predates the founding of the state of Israel in 1948,” he wrote. SJP, Rosenberg wrote, was erasing “the American history of predatory conduct towards blacks and instead exporting culpability to a scapegoat.”

Rosenberg also called SJP’s use of the word “genocide” “libelous and offensive.”

Valdery has sparred with SJP in the past — criticizing the student group for drawing parallels between America’s history of racial violence towards blacks and the Israeli-Palestinian conflict.

Here, as in most of her other criticisms of pro-Palestinian groups, she evoked an earlier era of black activism — often seen as the “golden age” of black and Jewish relations.

“When we marched and we preached, we spoke with a rhetoric that was very much rooted in Jewish texts and in Jewish identity,” Valdery said. “You don’t know the role that Israel as an idea, as a symbol, played [not only] in our community as a collective but in Dr. King’s speeches.”