A ‘Need to Rebel’ Led Her #OffTheDerech — and Into Bushwick 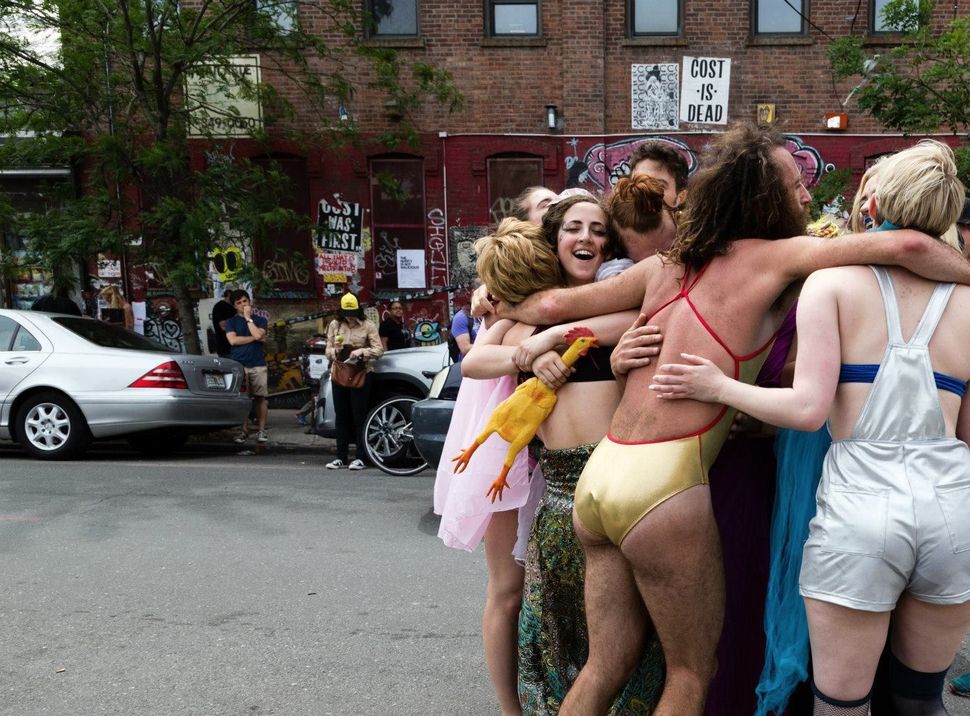 Stephanie Guedalia and friends in a performance piece in Bushwick last year. Image by Facebook

Stephanie Guedalia’s wake-up call came six years ago on Shavuot, in the spring, when Jews celebrate the receiving of the Torah from Mount Sinai. She was studying at a Modern Orthodox seminary in Jerusalem after high school, and decided to go to a talk given by a rabbi from Orayta, a men-only yeshiva that encourages students to question every aspect of Jewish faith.

Guedalia could certainly relate. Though she had grown up in a Modern Orthodox community in Boston, and attended the Maimonides School, a co-ed day school, she had never been shy about voicing her doubts and points of disagreement with religious strictures and idiosyncrasies. Her boldness came, she felt, from her passion for Judaism.

“I’m a huge Talmud nerd, and I loved debating with my teachers in that way,” she said. “I didn’t see doubts as, ‘Oh no, I’m being bad.’ I felt like I was being intellectually honest.”

After the rabbi’s talk, Guedalia went to ask him why Orayta didn’t have a program for women. The rabbi scoffed.

“He was like, ‘Do you have a giant sum of money for building a new building in the old city?’” she said. That attitude, she felt, clearly left no room for women: they prioritized the needs of men to the point that they would sooner build a whole new building than make room for female students.

Being rejected from a chance to study with other curious, unconvinced young adults, Guedalia said, was painful. She had never encountered such blatant indifference to the need for educational opportunities for women.

“It didn’t even cross their minds to make a girls program,” she said. “It was really, really scarring. I never had a way to think through and find that community.”

Stephanie Guedalia, 23, now counts herself as part of a different community: Jews who have left Orthodox Judaism, or gone “off the derech,” using the Hebrew word for path. This group was the subject of a recent survey—the first of its kind in giving insight into why these individuals left their communities, what their greatest challenges were once they left, and—for over 95% of them—how they have maintained their Jewish identity. Guedalia is part of the 37% of Modern Orthodox women who took the survey who said that the role of women in their community was a reason they decided to leave. Like over a third of respondents, she now does not affiliate with any particular Jewish movement.

Guedalia came to realize that she had grown up in one of the most liberal, feminist Modern Orthodox communities in the country. The shock of what much of the Modern Orthodox world expected of her, as a woman, came only after leaving that community, in which the education of women was such a high priority.

“Not that they should have prepared me,” she said. “Thank God that I was shocked. Thank God it didn’t become normalized in my head as something I should expect.”

Guedalia was excited to expand her ideas about what spirituality and religious practice could mean, and pushed the staff at the seminary to help her. At the end of the year, the rabbi at her seminary offered his diagnosis: Guedalia just had “a need to rebel.”

“This isn’t a need to rebel,” Guedalia remembers feeling. “This is a need to have genuine discussions about who I am and the kind of life I want to lead.”

That first disaffection in Jerusalem led down a path of serious questioning. It led to a utopian “Rainbow Gathering” in the Golan Heights, traveling through France and Spain and finally to New York University, in the philosophy department.

Even after leaving the seminary in Jerusalem and going to college in New York, Guedalia said that she continued to be frum, or observant—just in case.

“I made a Pascal’s wager,” she said, referring to the theory of the 17th century philosopher that each person bets his or her life on whether or not God exists. A successful bet, so the theory goes, would be to live as though God is real—if so, you will earn a place in Heaven, and if not, then at least you have lived a principled life. For Guedalia, this logic seemed sound—but only briefly.

“I realized, sorry Pascal, it’s not a fifty-fifty chance, there are a bunch of religions that are mutually exclusive,” she said. How, she felt, could she be sure that she was making the right choice of religion—or if it even made sense to choose at all?

“Where my search led was to, ‘No one knows what’s true, and I’m gonna find what’s meaningful to me,’” she said.

Through her burgeoning interest in performance art and theater studies Guedalia came to find a community that is engaged in the broad cultural discussions that she found lacking in the world of Orthodox Judaism. She transferred from the philosophy department to the Tisch School of the Arts at NYU, and realized that though she loved Talmud, strict religious observance might not gel with her new life as an artist.

“I want to be in a larger conversation,” she said. “I want to do my weird performance art stuff, and that will probably mean performing on Shabbat.”

She now lives in Brooklyn and makes her living as an art model and theatrical performer, where she is known by several names, including Squid and Stevphe (pronounced Steve). On the side—and to connect with Judaism in a way she never did as a kid—she teaches Hebrew school at the Romemu Jewish community. Though even a year ago Guedalia had little hope of finding the right community, she now feels she has, in Brooklyn’s latest artistic vanguard.

“I feel like I found my place. It’s in this house in Bushwick.”

A ‘Need to Rebel’ Led Her #OffTheDerech — and Into Bushwick