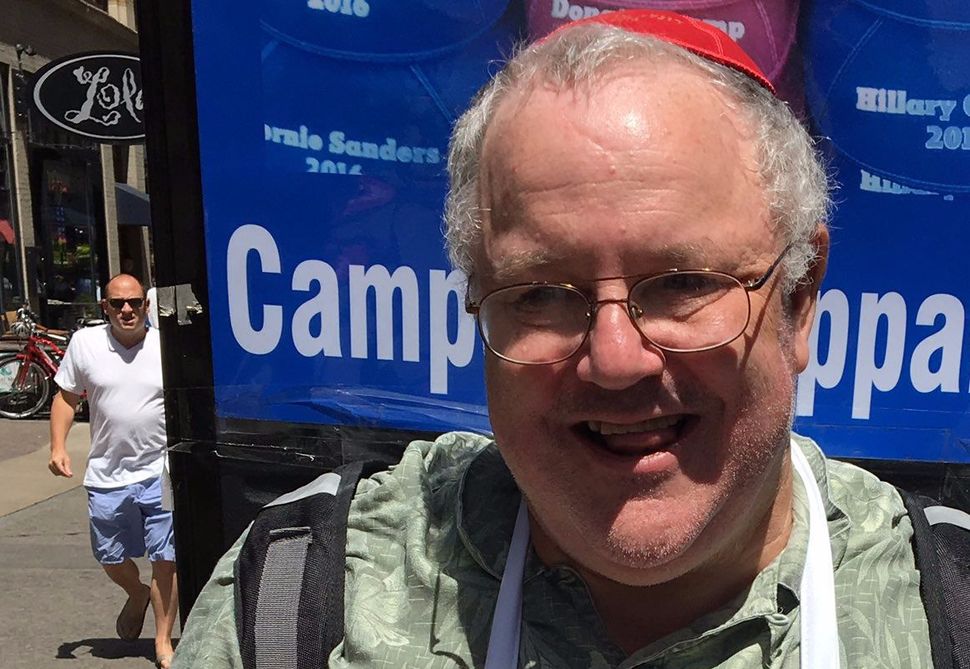 Marc Daniels, better known as “The Kippah Guy,” isn’t at the Republican National Convention this week in Cleveland for politics.

On the street near the Quicken Loans Arena, he sells yarmulkes in both Democrat blue and Republican red emblazoned with the names of the party candidates in Hebrew and English.

Instead, what matters to Daniels is the message he prints underneath, a message that he’s been hounding presidential candidates like Hillary Clinton and Donald Trump with since the Iowa caucuses in February: sow seeds of peace and weed out hate.

Daniels first developed his idea for a peace movement after a visit to the Dachau concentration camp, where he realized the need for a vision “positive as the Nazi and Hitler was negative.” Obsessed with gardening — along with Kabbalah, which he studied for years in Israel — the imagery for his campaign was born. Now, he only needed a vehicle for his message.

His first run-in with a presidential hopeful was with Donald Trump at an event in Burlington, Iowa, in October where he asked the Donald to put up or shut up on his support for Israel — and sign Daniels’ kippah.

Vendors showing up in Cleveland ahead of convention. Marc sells Trump yarmulkes, says Trump signed one at a rally. pic.twitter.com/k90jHvykr1

By no means is Daniels a Trump loyalist, however. At a Jeb Bush rally, Daniels shouted “Trump is a putz!” in response to the Trump’s recent remarks toward Muslims.

“I knew people would start tweeting about it,” he told the Forward. “I said he’s a putz because he has greatness within him and he’s wasting it.”

In fact, Clinton enthusiastically responded to Daniels’ message, announcing it to a crowd at an event.

“Thank you. Thank you so much,” she says in the video of the event, “I love that. It’s a great mission he’s on, to weed out hate. I think that’s especially appropriate here in Iowa. We’ve got to do everything we can to weed out hate and to plant understanding and more love and kindness.”

Daniels told the JTA in April that Trump and Bernie Sanders supporters were the biggest buyers of his head coverings, though he didn’t know why.