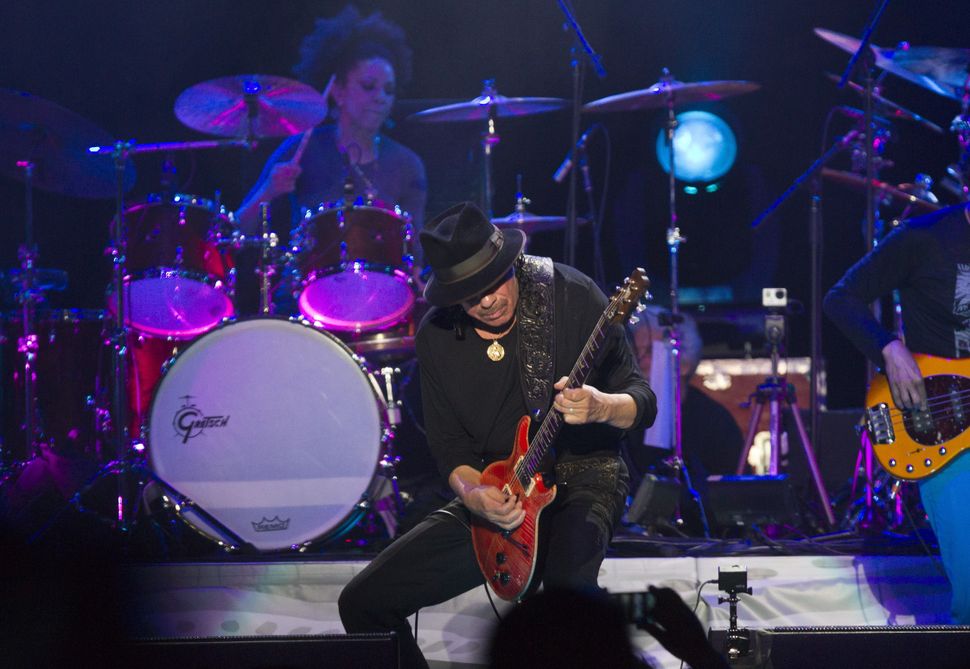 Carlos Santana is moving ahead with a performance, just days away now, in Tel Aviv — shunning public calls from the movement for the boycott, divest and sanction against Israel for him to cancel.

The Grammy-award winning rock superstar is scheduled to play in Tel Aviv on July 30.

And while Palestinian, Israeli and American BDS supporters have called on Santana to cancel, the show is going ahead as planned.

“We are excited to bring a musical message of peace, love and an end to conflict,” Santana said in a June video posted by StandWithUs, an influential pro-Israel organization. “The band and I bring our open hearts and and our musical energy that will resonate in your soul long after the last note as been played.”

Give the peace sign with two hands, Santana said goodbye in Hebrew and Arabic: “Shalom, Assalamuylakyum.”

Israeli fans had reason to be worried, though. Santana canceled a performance in Tel Aviv in 2010, giving the official reason as “scheduling conflict.” But many BDS supporters celebrated that cancellation as a victory for the movement and often list his name as a BDS-supporter.

So when Santana announced the Tel Aviv show earlier this year, BDS activists were quick to mount a campaign.

“I very much hope you’ll heed the words of so many Palestinians, Israelis [and] Jews,” wrote Mark LeVine, a professor at the University of California, on the blog Tikkun Daily, “by refusing to perform in Israel until the occupation ends.”

Tens of thousands of people signed a petition asking for Santana to cancel.

And the US Campaign to End the Israeli Occupation made their video, widely-shared online, calling on Santana to cancel.

But Santana was unswayed.

Indeed, when it comes to BDS, global pop stars are divided. During the 2014 Gaza-Israel war, rapper Talib Kweli pulled out of a show, citing solidarity with Palestinians. Another star who refuses to play in Israel is Roger Waters, one of the founding members of Pink Floyd. Elvis Costello won’t play Israel. The Pixies cancelled one show in 2010 after Israel’s raid on a flotilla of ships carrying aid for Gaza.

Not everyone feels the pressure, though.

Others struggle to strike the right tone on the conflict.

Rihanna played Israel in 2013, but the next year seemed to give mixed messages about her own political position. During the Gaza-Israel war of 2014, she tweeted “#FreePalestine.” The tweet disappeared eight minutes later.