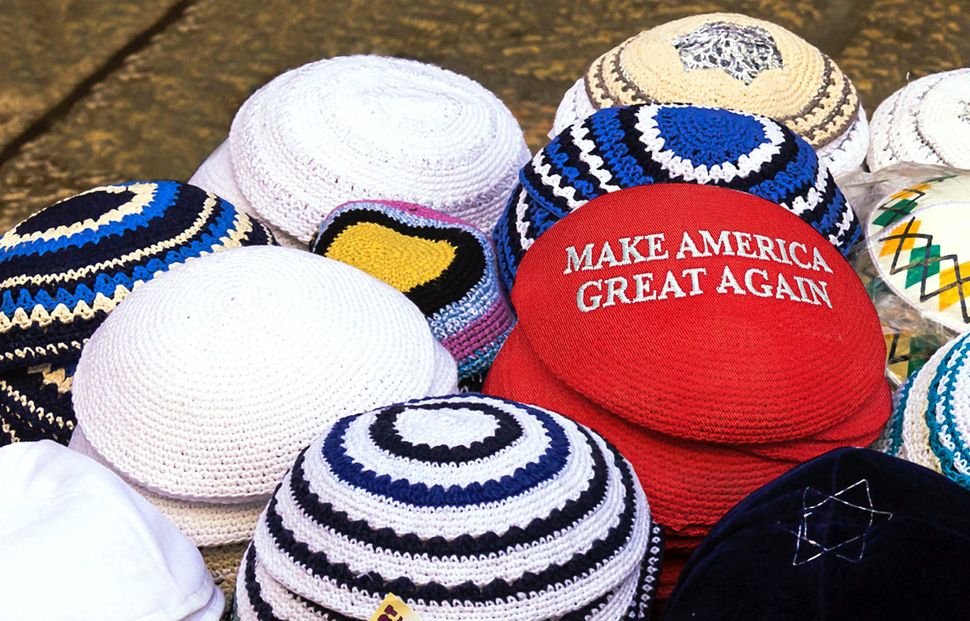 A new Jewish group is looking to make its voice heard — and it hopes to help Donald Trump make it to the White House.

Only a few weeks old, Jews Choose Trump looks to address what it sees as the hostile environment in the Jewish community toward discussions about Republican candidate Donald Trump, as well as to correct what it called an anti-Donald Trump bias in the world of Jewish media.

One of the group’s founders, Carol Greenwald, president of a Maryland investment firm and still actively involved as a senior citizen, told the Forward she has been a pro-Israel activist in a number of grassroots organizations over the years.

“The group began basically because I was very offended by the silencing of anyone who supported Trump,” Greenwald, who plans to vote for Trump, said. “It became socially unacceptable to say you were supporting Trump.”

This culture of silence is compounded by the smear tactics deployed against Trump in the Jewish press, Greenwald said, adding that she believes this publication to be guilty of it as well.

“We want people to start writing letters to their Jewish newspapers to confront the lies that are being spread about [Trump’s] positions on Israel and America,” Greenwald said. “We at least want letters to the editor saying ‘You aren’t representing everyone.’”

During Trump’s candidacy, pro-Israel activists rewrote the Republican party’s platform to become much more deferential to Israel, deleting the party’s former support for a two-state solution to the Israeli-Palestinian conflict.

Greenwald said the group’s leaders all believe in a quote from Isaiah 62:1, which says, “For Zion’s sake, I will not be silent.”

According to Greenwald, the Jews Choose Trump team does have a former media figure of its own: Jewish Press correspondent Lori Lowenthal Marcus. Marcus told the Forward in an email that she joined the group’s founders in order to ensure people understand Trump’s stances on foreign policy and national security, key issues for her, rather than to address media bias. Primarily, she assists the group with logistics and its website.

Marcus left The Jewish Press in April for reasons not related to the election, and is not currently working in journalism, she said.

Other pro-Israel leading members include New Yorker Eve Stieglitz,who is the Jewish advisor for women on the National Diversity Coalition for Trump, and JCC Watch founder Richard Allen.

Describing the silencing as a tactic of the left, Greenwald said it led her to call other like-minded Jews to see if they wanted to fight back.

“I said, do you want to join with me and try to change the tone in the Jewish community and try and have a reasonable conversation?” Greenwald told the Forward.

She said the group sent out its first mass mailing Thursday. As of this Tuesday, she said more than 650 people have signed up on the group’s site, which has garnered 42,000 views from 40 states since it launched nine days ago.

Even the power of just one website amazed her, Greenwald said. While lots of supporters are from California and New York, the group is also getting submissions from Jewish supporters in states like Alabama and Wyoming, she said.

However, Greenwald told the Forward that she’s also talked to many people who call wanting to show support for Trump, but who are afraid of the social costs of publicly doing so. Prominent people in their communities, including one conservative political leader in Florida, have told her they aren’t willing to suffer the costs of saying they’re voting Trump, she said.

Greenwald herself has received emails from anti-Trump people calling Trump a Nazi, which she said offensively trivializes the horror of the Holocaust.

Given the low cost of maintaining a website, Jews Choose Trump is not asking for donations and does not plan on asking for them, she said. She added the group plans on taking out ads in the press once its membership has grown.

“This is what we are trying to confront,” she said. “That kind of atmosphere is the death-knell of democracy.” Contact Drew Gerber at gerber@forward.com or on Twitter, @dagerber