The family of the Australian yeshiva student killed in the Crown Heights riots condemned as “shameful” a street festival jointly planned by black and Jewish leaders to commemorate the 25th anniversary of the racial unrest that tore through the Brooklyn neighborhood.

“The decision to hold a ‘Community Festival’ to commemorate the 25th anniversary of the Crown Heights Riots is shameful and a disgrace,” wrote Norman Rosenbaum, whose brother Yankel Rosenbaum was killed by attackers on August 20 1991, in a statement to the website Crownheights.info.

“It is an insult to the memory of Yankel Rosenbaum who was murdered in the early hours of the riots for being a Jew,” Rosenbaum wrote. “The late Mayor (Ed) Koch first called the riots for what they truly were – a pogrom! And it should never be forgotten, that pogrom was not a Community Festival!”

The Aug. 21 neighborhood festival, known as One Crown Heights, is sponsored by civic groups and elected officials, including Brooklyn Borough President Eric Adams along with the Anti-Defamation League and the Jewish Children’s Museum.

A notice for the festival, which appeared on the neighborhood website COLlive.com and elsewhere, promises “fun for all ages” with “kosher and nonkosher food.”

The controversy over the commemoration is a sign of the divisions that still persist a quarter century after the riots that shook New York in 1991.

Leaders agree that everyday tensions are much lower on the streets that Hasidic Jews and mostly Caribbean-American blacks have shared for decades. And there is no denying that the neighborhood itself has become a dramatically different place as a rapid influx of wealthy newcomers has caused real estate values to skyrocket — and housing prices to jump for both blacks and Jews.

But divisions remain, especially in the way that members of the two communities frame the riots.

For blacks, the violence put a spotlight on festering economic and racial discrimination. But many Jews viewed the unrest as a reflection of widespread anti-Semitism within the black community, a perspective that was backed by an official report that revealed blacks systematically targeted Jews during the violence. 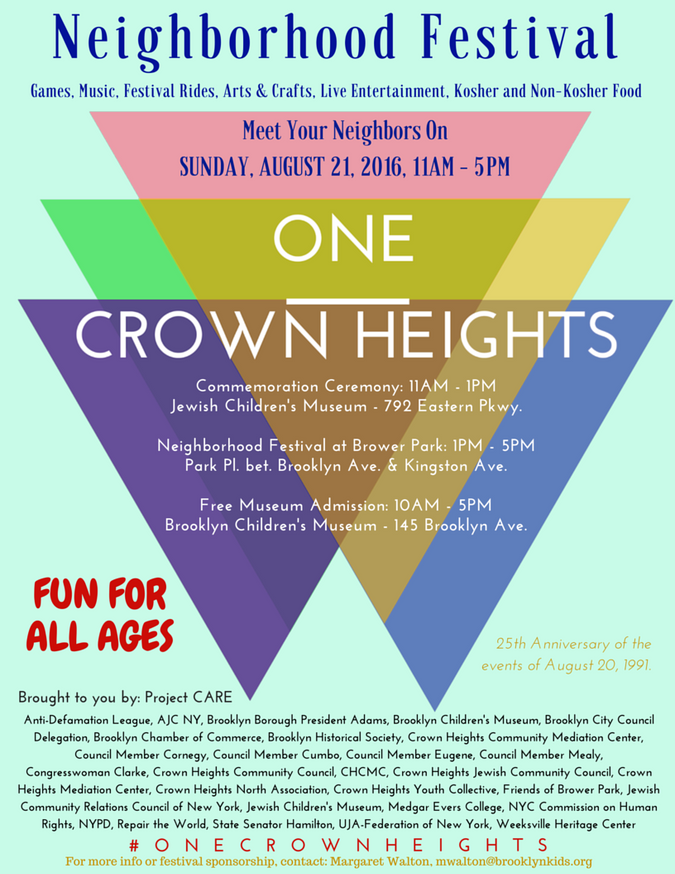 Yankel Rosenbaum, an Australian Jew, was stabbed and killed by a group of black men during violence which erupted after a car in a motorcade carrying Rabbi Menachem Mendel Schneerson, leader of the Chabad-Lubavitch community, struck and killed Gavin Cato a black 7-year-old with Caribbean roots.

During the three days of protests and violence which followed, nearly 200 people were injured.

“On street corners, in interviews and at a harsh meeting in a local public school, blacks spoke of preferential treatment for the Hasidim,” the New York Times reported at the time. “Jews spoke of blacks becoming criminals. City officials spoke of danger for a city gripped by racial antagonism.”

Then-Gov. Mario Cuomo would later describe the riots as “the most extensive racial unrest in New York City in over 20 years.”

One organizer of the upcoming fair, Devorah Halberstam, told the New York Post that the event was a tool to bring people together — and denied it was in poor taste.

Adams also defended the festival as a show of unity in an interview with the Post.

“I am happy that all of the community-building work we have undertaken together in the last 25 years … has fostered a more unified Crown Heights where we can stand together in our diversity to commemorate the past and to build toward a more prosperous and joyous future for our children,” he said.

Crown Heights Community activist Yaacov Behrman, in a statement published on Crownheights.info, credited blacks and Jews with coming together to mend the wounds since the riots.

Still, he said, “holding a neighborhood fun day to commemorate the riots is inexcusable and shamefully low.”